To configure parameters for this interface, you must configure them from the CLI. See also Changing the Management IP Address. To view information about this interface in the FXOS CLI, connect to local management and show the management port:

Note that the chassis management interface remains up even if the physical cable or SFP module are unplugged, or if the mgmt-port shut command is performed.

Each interface can be one of the following types:

The following sections describe the interaction between FXOS and the application for interfaces.

For all logical devices, you can create VLAN subinterfaces within the application.

Independent Interface States in the Chassis and in the Application

For the FTD, certain interface modules on the Firepower 9300 and 4100 series let you enable the Hardware Bypass feature. Hardware Bypass ensures that traffic continues to flow between an inline interface pair during a power outage. This feature can be used to maintain network connectivity in the case of software or hardware failures.

The FTD supports Hardware Bypass for interface pairs on specific network modules on the following models:

The supported Hardware Bypass network modules for these models include:

Hardware Bypass can only use the following port pairs:

The maximum MTU that is supported for the application on the Firepower 4100/9300 chassis is 9184.

Container instances can share data-sharing type interfaces. This capability lets you conserve physical interface usage as well as support flexible networking deployments. When you share an interface, the chassis uses unique MAC addresses to forward traffic to the correct instance. However, shared interfaces can cause the forwarding table to grow large due to the need for a full mesh topology within the chassis (every instance must be able to communicate with every other instance that is sharing the same interface). Therefore, there are limits to how many interfaces you can share. 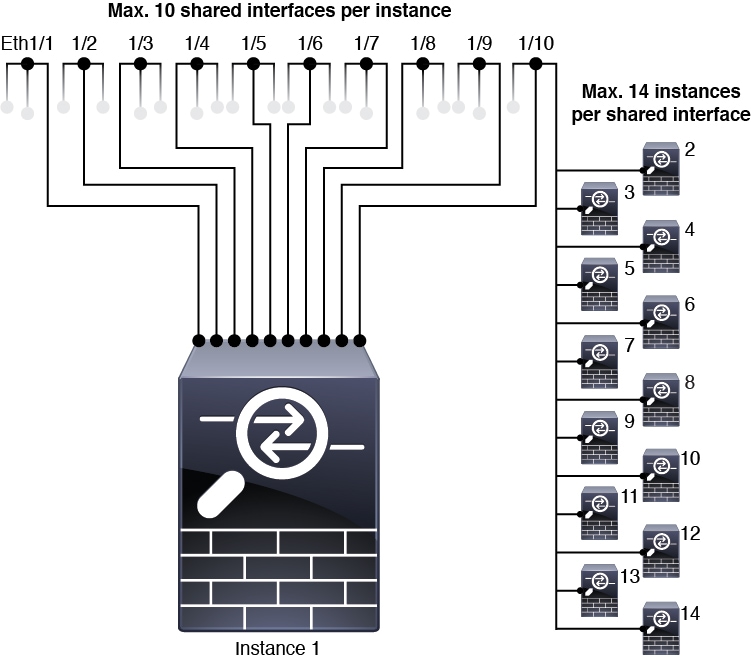 For optimal scalability of the forwarding table, share as few interfaces as possible. Instead, you can create up to 500 VLAN subinterfaces on one or more physical interfaces, and then divide the VLANs among the container instances.

When sharing interfaces, follow these practices in the order of most scalable to least scalable:

Each SM-44 module can support up to 14 instances. Instances are split between modules as necessary to stay within limits.

Each SM-44 module can support up to 14 instances. Instances are split between modules as necessary to stay within limits.

The Firepower Firepower 9300 with one SM-44 can support up to 14 instances.

An inline set acts like a bump on the wire, and binds two interfaces together to slot into an existing network. This function allows the system to be installed in any network environment without the configuration of adjacent network devices. Inline interfaces receive all traffic unconditionally, but all traffic received on these interfaces is retransmitted out of an inline set unless explicitly dropped.

Guidelines and Limitations for Firepower Interfaces

Default MAC address assignments depend on the type of interface.

Enable or Disable an Interface

You can change the Admin State of each interface to be enabled or disabled. By default, physical interfaces are disabled. For VLAN subinterfaces, the admin state is inherited from the parent interface.

An EtherChannel (also known as a port channel) can include up to 16 member interfaces of the same media type and capacity, and must be set to the same speed and duplex. The media type can be either RJ-45 or SFP; SFPs of different types (copper and fiber) can be mixed. You cannot mix interface capacities (for example 1GB and 10GB interfaces) by setting the speed to be lower on the larger-capacity interface. The Link Aggregation Control Protocol (LACP) aggregates interfaces by exchanging the Link Aggregation Control Protocol Data Units (LACPDUs) between two network devices.

You can configure each physical Data or Data-sharing interface in an EtherChannel to be:

LACP coordinates the automatic addition and deletion of links to the EtherChannel without user intervention. It also handles misconfigurations and checks that both ends of member interfaces are connected to the correct channel group. “On” mode cannot use standby interfaces in the channel group when an interface goes down, and the connectivity and configurations are not checked.

You can add between 250 and 500 VLAN subinterfaces to the chassis, depending on your network deployment.

You can also add subinterfaces within the application.

The following procedure shows how to configure breakout cables for use with the Firepower 4100/9300 chassis. You can use a breakout cable to provide four 10 Gbps ports in place of a single 40 Gbps port.

From the Interfaces page of the Firepower Chassis Manager, you can view the status of the installed interfaces on the chassis, edit interface properties, enable or disable an interface, and create port channels.

The Interfaces page is made up of two sections:

Error: The Switch Forwarding Path has 1076 entries and exceeds the limit of 1024. If you are adding an interface, reduce the number of shared interfaces assigned to logical devices, reduce the number of logical devices sharing interfaces, or use non-shared subinterfaces instead. If you are deleting a subinterface, you are seeing this message because the remaining configuration is no longer optimized to fit within the Switch Forwarding Path table. See the FXOS configuration guide for troubleshooting information about the deletion use case. Use 'show detail' under scope 'fabric-interconnect' to view the current Switch Forwarding Path Entry Count.

Scenario 2: Remove all subinterfaces in the set from one logical device

Remove all subinterfaces in the set from the logical device at the CLI, and then save the configuration so that the removal is simultaneous.

Scenario 3: Remove a subinterface from all logical devices in the group

Remove the subinterface from all logical devices in the group at the CLI, and then save the configuration so that the removal is simultaneous. For example:

Scenario 4: Add a subinterface to one or more logical devices

Add the subinterface to all logical devices in the group at the CLI, and then save the configuration so that the addition is simultaneous.