This chapter describes how to configure the adaptive security appliance for Cisco Intercompany Media Engine Proxy.

Cisco Intercompany Media Engine enables companies to interconnect on-demand, over the Internet with advanced features made available by VoIP technologies. Cisco Intercompany Media Engine allows for business-to-business federation between Cisco Unified Communications Manager clusters in different enterprises by utilizing peer-to-peer, security, and SIP protocols to create dynamic SIP trunks between businesses. A collection of enterprises work together to end up looking like one large business with inter-cluster trunks between them.

How the UC-IME Works with the PSTN and the Internet

The Cisco Intercompany Media Engine uses information from PSTN calls to validate that the terminating side owns the number that the originated side had called. After the PSTN call terminates, the enterprises involved in the call send information about the call to their Cisco IME server. The Cisco IME server on the originating side validates the call.

On successful verification, the terminating side creates a ticket that grants permission to the call originator to make a Cisco IME call to a specific number. See Tickets and Passwords for information.

To send a spam VoIP call to every phone within an enterprise, an organization would have to purchase the Cisco Intercompany Media Engine and Cisco Unified Communications Manager and have called each phone number within the enterprise over the PSTN and completed each call successfully. Only then can it launch a VoIP call to each number.

Because the initial calls are over the PSTN, they are subject to any national regulations regarding telemarketing calling. For example, within the United States, they would be subject to the national do-not-call registry.

Subsequently, someone in Enterprise B calls that number again. That call setup message from Enterprise B to Enterprise A includes the ticket in the X-Cisco-UC-IME-Ticket header field in the SIP INVITE message. This message arrives at the Enterprise A ASA. The ASA verifies the signature and computes several checks on the ticket to make sure it is valid. If the ticket is valid, the ASA forwards the request to Cisco UCM (including the ticket). Because the ASA drops requests that lack a valid ticket, unauthorized calls are never received by Cisco UCM.

Call Fallback to the PSTN

Cisco Intercompany Media Engine provides features that manage the QoS on the Internet, such as the ability to monitor QoS of the RTP traffic in real-time and fallback to PSTN automatically if problems arise. Call fallback from Internet VoIP calls to the public switched telephone network (PSTN) can occur for two reasons changes in connection quality and signal failure for the Cisco Intercompany Media Engine.

Internet connections can vary wildly in their quality and vary over time. Therefore, even if a call is sent over VoIP because the quality of the connection was good, the connection quality might worsen mid-call. To ensure an overall good experience for the end user, Cisco Intercompany Media Engine attempts to perform a mid-call fallback.

If signaling problems occur, the call falls back to the PSTN; however, the Cisco UCM initiates the PSTN fall back and the adaptive security appliance does not send REFER message.

Figure 1-2 illustrates the components of the Cisco Intercompany Media Engine in a basic deployment. 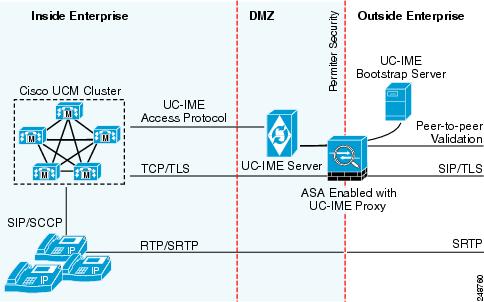 In a basic deployment, the Cisco Intercompany Media Engine Proxy sits in-line with the Internet firewall such that all Internet traffic traverses the adaptive security appliance. In this deployment, a single Cisco UCM or a Cisco UCM cluster is centrally deployed within the enterprise, along with a Cisco Intercompany Media Engine server (and perhaps a backup).

As shown in Figure 1-3, the adaptive security appliance sits on the edge of the enterprise and inspects SIP signaling by creating dynamic SIP trunks between enterprises.

Figure 1-4 illustrates the architecture of the Cisco Intercompany Media Engine in an off path deployment.

Figure 1-4 Off Path Deployment of the Adaptive Security Appliance 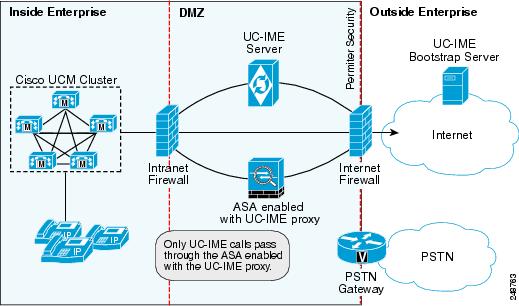 The following table shows the details of the Unified Communications Proxy license:

This feature is not available on No Payload Encryption models.

Supported in single context mode only.

Supported in routed firewall mode only.

Does not support IPv6 addresses.

Additionally, the subject DN you configure for the Cisco Intercompany Media Engine Proxy match the domain name that has been set for the local Cisco UCM.

To resolve this issue, you must additionally enter the clear connection all command and restart the ASA. If the failure is due to failover, the connections from the primary ASA are not synchronized to the standby ASA.

The next IME call (the third call after the clear connection all command is issued), will be completely successful.

This limitation does not apply when the originating and terminating IP phones are configured with SIP.

Assume for example, the ASA is configured to have a maximum of 100 TLS proxy sessions and IME calls between SCCP IP phones establish 101 TLS proxy sessions. In this example, the next IME call is initiated successfully by the originating SCCP IP phone but fails after the call is accepted by the terminating SCCP IP phone. The terminating IP phone rings and on answering the call, the call hangs due to an incomplete TLS handshake. The call does not fall back to the PSTN.

Table 1-1 lists the release history for this feature.