This chapter provides an overview of the features available for the Cisco ISA 3000 and contains the following sections:

The Cisco ISA 3000 is low-power, fan-less, with Gigabit Ethernet and a dedicated management port. There are two SKUs: 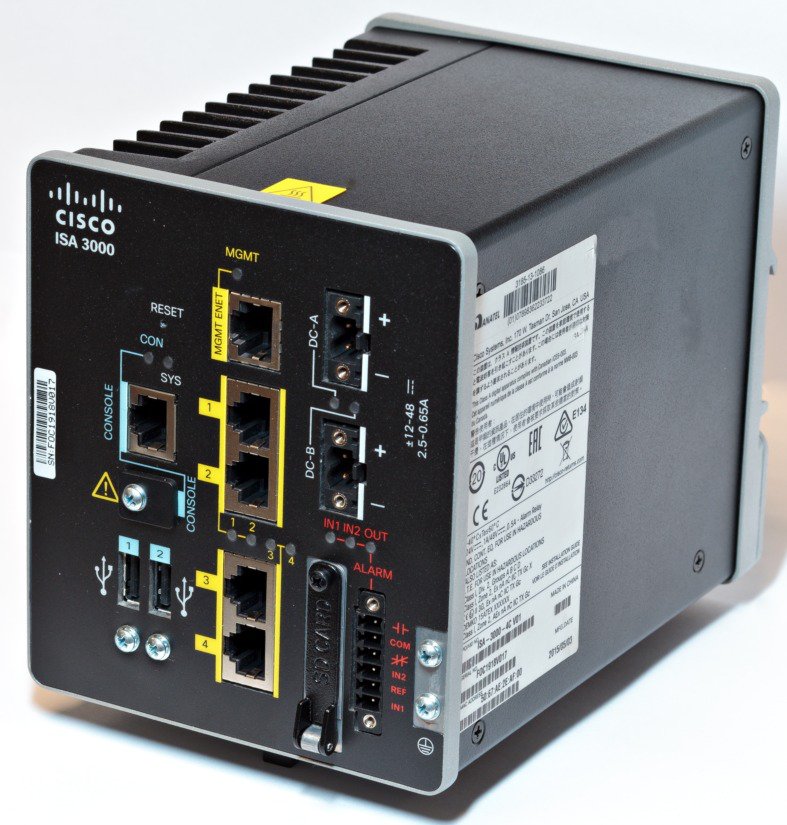 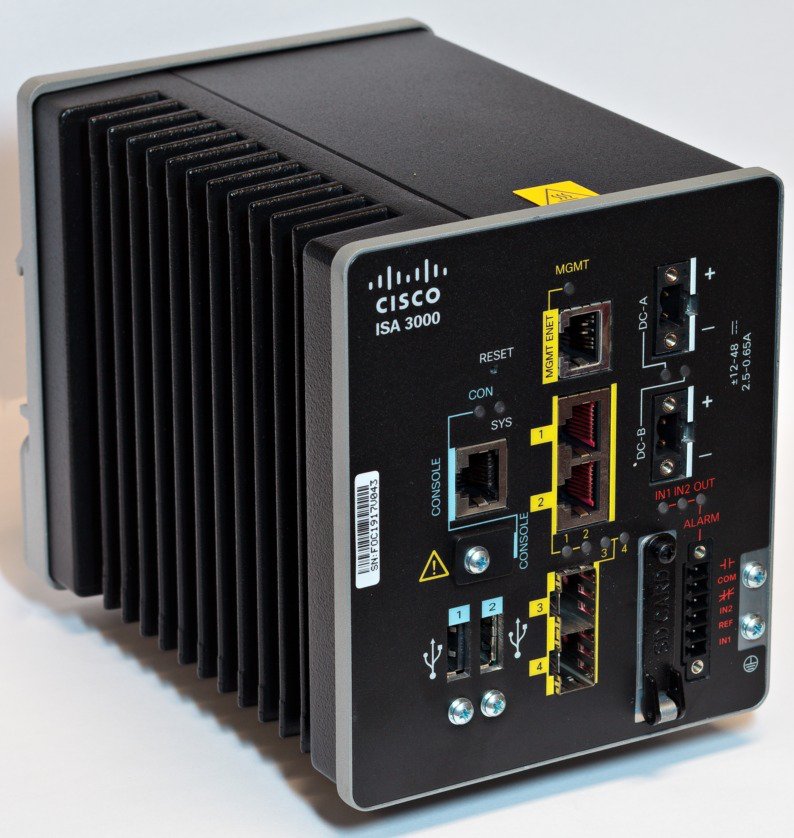 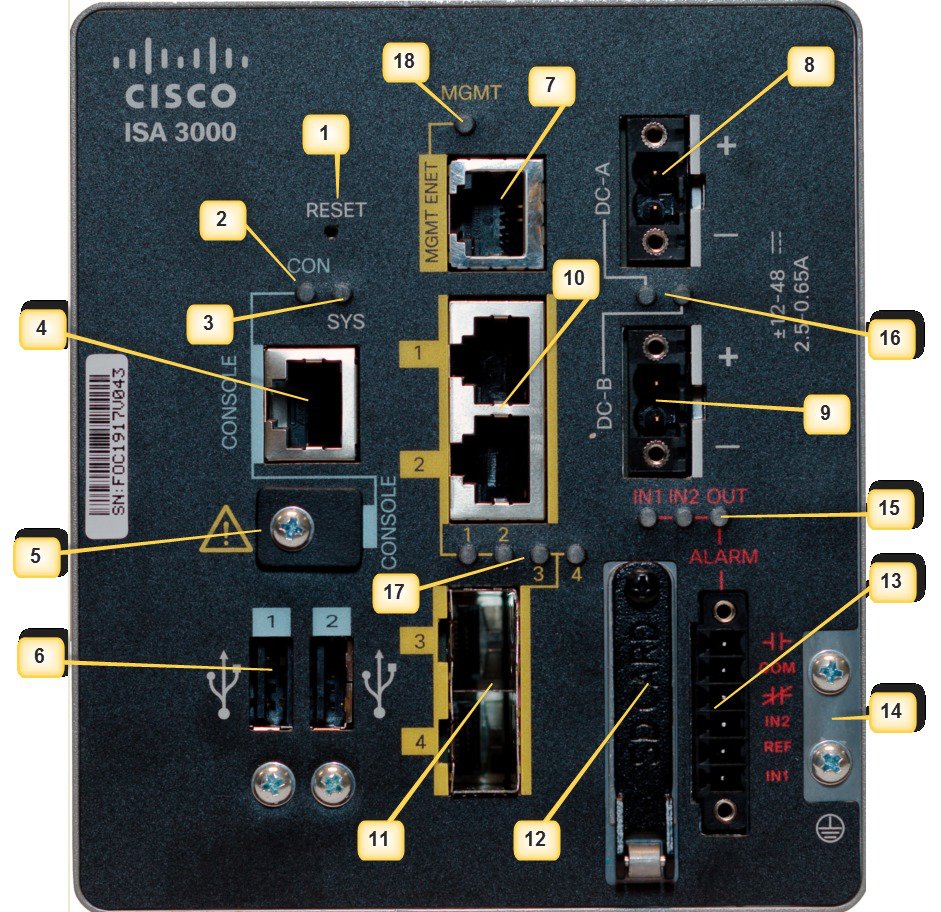 The following table describes the LEDs for the Cisco ISA3000.

The Cisco ISA 3000 has the following:

The Cisco ISA 3000 has two externally accessible Type-A USB (4-pin) connectors. Each USB port will support output powering of 5 volts and up to a maximum of 500 mA.

A management-only 10/100/1000 BaseT Ethernet port is provided. This port will be the only port able to be used for booting over the network, or for initial setup and management of the system. This port is Management 1/1 in the configuration.

The Cisco ISA 3000 can be configured through a web interface, or through the console port. The console port is either a RJ45 or a Mini USB connector. A standard management cable (Part number 72-3383-01) can be used to convert the RJ45 to DB9 connector.

The default configuration settings for the RJ45 console port are:

If the USB Console Port is active (cable inserted and remote PC drivers are enabled) by default the console will device from RJ45 to USB when the USB cable is detected. If both ports are connected, the Mini USB console port is used.

The following table shows the pin-outs for the CON/AUX RJ-45 connector:

The console port will not support a remote dial-in modem.

The following table lists the different SKUs available for the Cisco ISA 3000.

This section provides an overview of the following hardware features for the Cisco ISA3000.

Hardware Features for the Cisco ISA 3000

The following lists the hardware platform features for the

When depressed the pushbutton follows these actions:

The power supply does not support reverse polarity, but does have reverse polarity protection. This means if you reverse + & - connections, the system will not power on but there will be no damage.

The + terminal always has to be greater than the - terminal for the system to operate. The difference is in the system grounding scheme used.

To ensure uninterrupted operation the redundant power connections must be connected to independently separated power sources.

The Cisco ISA 3000 has a removable SD flash memory slot (referred to as SD). This is primarily to allow easy updates, copying of logs and crash-dumps.

The device does not come with a removable SD flash memory card installed, this is an optional spare item, Cisco part number SD-IE-1GB=.

Check the software guide for the operating system you are running for information on SD memory support.

Do not insert or remove the SD card while power is on; an electrical arc can occur. This could cause an explosion in hazardous location installations. Be sure that power is removed or the area is nonhazardous before proceeding. Statement 379 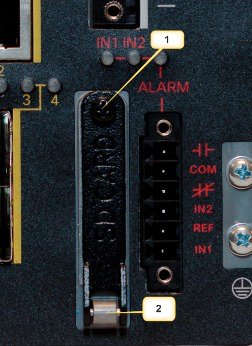 To install or replace the SD card, follow these steps:

On the front of the device, locate the door that protects the SD card slot. Loosen the captive screw at the top of the door using a Phillips screwdriver to open the door.

After the card is installed, close the guard door and fasten the captive screw using a Phillips screwdriver to keep the door in place.

The Cisco ISA 3000 has alarm ports as shown in Figure 1-3. There are two conditions that generate an alarm:

When either condition is met, the alarm LED turns red, and a syslog message and SNMP trap is triggered.

Check the software guide for the operating system you are running for information on alarm port support.

The device can be configured to run dual power supplies. When set, the system expects to see both power supplies functioning properly.

Check the software guide for the operating system you are running for information on dual power supply configuration and support.

When configured for dual power supply, and a failure occurs, the Alarm Out LED turns red. The alarm relay is also energized. A syslog message is generated:

When configured for dual power supply, and a failure recovers, the Alarm Out LED turns off. A syslog message is generated:

The operating system monitors the CPU temperature when it is running.

If the CPU temperature is in a critical condition (below -40°C or above 105°C), the Alarm Out LED turns red.

When the CPU temperature returns to a normal condition, the Alarm Out LED turns off.

The critical range of temperature is not configurable. It is hard coded as below -40°C or above 105°C.