This feature relies heavily on multiprotocol Border Gateway Protocol (BGP) extensions in the IPv4 network configuration on the provider edge (PE) router to exchange IPv6 reachability information (in addition to an MPLS label) for each IPv6 address prefix. Edge routers are configured as dual-stack, running both IPv4 and IPv6, and use the IPv4 mapped IPv6 address for IPv6 prefix reachability exchange.

For detailed information about the commands used to configure 6PE/VPE, see the .

To configure the 6PE/VPE feature, you should understand the concepts that are described in these sections:

These solutions are deployed on service providers’ backbones when the amount of IPv6 traffic and the revenue generated are in line with the necessary investments and the agreed-upon risks. Conditions are favorable for the introduction of native IPv6 services, from the edge, in a scalable way, without any IPv6 addressing restrictions and without putting a well-controlled IPv4 backbone in jeopardy. Backbone stability is essential for service providers that have recently stabilized their IPv4 infrastructure.

Inter-AS support for 6PE requires support of Border Gateway Protocol (BGP) to enable the address families and to allocate and distribute PE and ASBR labels.

IPv6 on the Provider Edge and Customer Edge Routers

6PE is particularly applicable to service providers who currently run an MPLS network. One of its advantages is that there is no need to upgrade the hardware, software, or configuration of the core network, and it eliminates the impact on the operations and the revenues generated by the existing IPv4 traffic. MPLS is used by many service providers to deliver services to customers. MPLS as a multiservice infrastructure technology is able to provide layer 3 VPN, QoS, traffic engineering, fast re-routing and integration of ATM and IP switching.

Using tunnels on the CE routers is the simplest way to deploy IPv6 over MPLS networks. It has no impact on the operation or infrastructure of MPLS and requires no changes to the P routers in the core or to the PE routers. However, tunnel meshing is required as the number of CEs to connect increases, and it is difficult to delegate a global IPv6 prefix for an ISP.

The following figure illustrates the network architecture using tunnels on the CE routers. 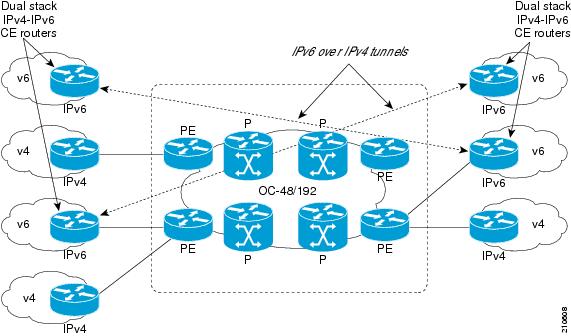 Internal and external BGP multipath for IPv6 allows the IPv6 router to load balance between several paths (for example, same neighboring autonomous system (AS) or sub-AS, or the same metric) to reach its destination. The 6PE multipath feature uses multiprotocol internal BGP (MP-IBGP) to distribute IPv6 routes over the MPLS IPv4 core network and to attach an MPLS label to each route.

When MP-IBGP multipath is enabled on the 6PE router, all labeled paths are installed in the forwarding table with MPLS information (label stack) when MPLS information is available. This functionality enables 6PE to perform load balancing.

This section includes these implementation procedures:

This task describes how to configure 6PE/VPE on PE routers to transport the IPv6 prefixes across the IPv4 cloud.

Ensure that you configure 6PE/VPE on PE routers participating in both the IPv4 cloud and IPv6 clouds.