This module provides information about segment routing for traffic engineering (SR-TE) policies, how to configure SR-TE policies, and how to steer traffic into an SR-TE policy.

Segment routing for traffic engineering (SR-TE) uses a “policy” to steer traffic through the network. An SR-TE policy path is expressed as a list of segments that specifies the path, called a segment ID (SID) list. Each segment is an end-to-end path from the source to the destination, and instructs the routers in the network to follow the specified path instead of following the shortest path calculated by the IGP. If a packet is steered into an SR-TE policy, the SID list is pushed on the packet by the head-end. The rest of the network executes the instructions embedded in the SID list.

Every SR-TE policy has a color value. Every policy between the same node pairs requires a unique color value.

Observe the following guidelines and limitations for the platform.

An SR policy is instantiated, or implemented, at the head-end router.

A dynamic path is based on an optimization objective and a set of constraints. The head-end computes a solution, resulting in a SID-list or a set of SID-lists. When the topology changes, a new path is computed. If the head-end does not have enough information about the topology, the head-end might delegate the computation to a Segment Routing Path Computation Element (SR-PCE). For information on configuring SR-PCE, see Configure Segment Routing Path Computation Element chapter.

An explicit path is a specified SID-list or set of SID-lists.

An SR-TE policy initiates a single (selected) path in RIB/FIB. This is the preferred valid candidate path.

A candidate path has the following characteristics:

A path is selected when the path is valid and its preference is the best among all candidate paths for that policy.

For a dynamic path that traverses a specific interface between nodes (segment), the algorithm may encode this segment using an Adj-SID. The SR-TE process prefers the protected Adj-SID of the link, if one is available.

Optimization objectives allow the head-end router to compute a SID-list that expresses the shortest dynamic path according to the selected metric type:

This example shows a dynamic path from head-end router 1 to end-point router 3 that minimizes IGP or TE metric: 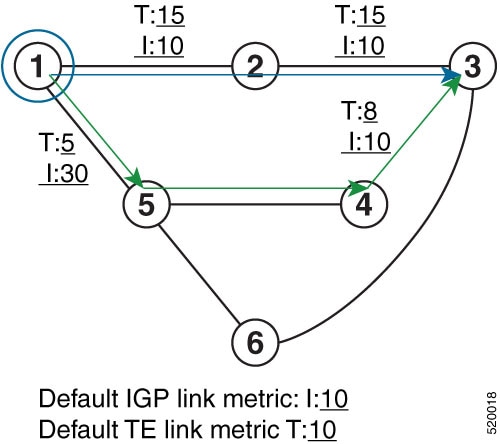 Use the metric value command in SR-TE interface submode to configure the TE metric for interfaces. The value range is from 0 to 2147483647.

The following configuration example shows how to set the TE metric for various interfaces:

Constraints allow the head-end router to compute a dynamic path according to the selected metric type:

In the traditional TE scheme, links are configured with attribute-flags that are flooded with TE link-state parameters using Interior Gateway Protocols (IGPs), such as Open Shortest Path First (OSPF).

Named Interface Link Admin Groups and SR-TE Affinity Maps let you assign, or map, up to color names for affinity and attribute-flag attributes instead of 32-bit hexadecimal numbers. After mappings are defined, the attributes can be referred to by the corresponding color name in the CLI. Furthermore, you can define constraints using include-any, include-all, and exclude-any arguments, where each statement can contain up to 10 colors.

Use the affinity name NAME command in SR-TE interface submode to assign affinity to interfaces. Configure this on routers with interfaces that have an associated admin group attribute.

The following example shows how to assign affinity to interfaces and to define affinity maps. This configuration is applicable to any router (SR-TE head-end or transit node) with colored interfaces.

To configure a SR-TE policy with a dynamic path, optimization objectives, and affinity constraints, complete the following configurations:

For a dynamic path that traverses a specific interface between nodes (segment), the algorithm may encode this segment using an Adj-SID. The SR-TE process prefers the protected Adj-SID of the link, if one is available.

The following example shows a configuration of an SR policy at an SR-TE head-end router. The policy has a dynamic path with optimization objectives and affinity constraints computed by the head-end router.

The following example shows a configuration of an SR policy at an SR-TE head-end router. The policy has a dynamic path with optimization objectives and affinity constraints computed by the SR-PCE.

To configure an SR-TE policy with an explicit path, complete the following configurations:

A segment list can use IP addresses or MPLS labels, or a combination of both.

When configuring an explicit path using IP addresses of links along the path, the SR-TE process prefers the protected Adj-SID of the link, if one is available.

Create a segment list with IP addresses and MPLS labels:

To fully configure SR-TE flexible name-based policy constraints, you must complete these high-level tasks in order:

The path computation element protocol (PCEP) describes a set of procedures by which a path computation client (PCC) can report and delegate control of head-end label switched paths (LSPs) sourced from the PCC to a PCE peer. The PCE can request the PCC to update and modify parameters of LSPs it controls. The stateful model also enables a PCC to allow the PCE to initiate computations allowing the PCE to perform network-wide orchestration.

BGP may be used to distribute SR Policy candidate paths to an SR-TE head-end. Dedicated BGP SAFI and NLRI have been defined to advertise a candidate path of an SR Policy. The advertisement of Segment Routing policies in BGP is documented in the IETF drafthttps://datatracker.ietf.org/doc/draft-ietf-idr-segment-routing-te-policy/

SR policies with IPv4 and IPv6 end-points can be advertised over BGPv4 or BGPv6 sessions between the SR-TE controller and the SR-TE headend.

The following configuration shows the an SR-TE head-end with a BGPv4 session towards a BGP SR-TE controller. This BGP session is used to signal both IPv4 and IPv6 SR policies.

The following configuration shows an SR-TE head-end with a BGPv6 session towards a BGP SR-TE controller. This BGP session is used to signal IPv6 SR policies.

Automated steering (AS) allows service traffic to be automatically steered onto the required transport SLA path programmed by an SR policy.

When a BGP route has multiple extended-color communities, each with a valid SR Policy, the BGP process installs the route on the SR Policy giving preference to the color with the highest numerical value.

The granularity of AS behaviors can be applied at multiple levels, for example:

AS behaviors apply regardless of the instantiation method of the SR policy, including:

Packets received with a BSID as top label are steered into the SR-TE policy associated with the BSID. When the BSID label is popped, the SR-TE policy’s SID list is pushed.

BSID can be used in the following cases:

Policy-Based Tunnel Selection (PBTS) is a mechanism that lets you direct traffic into specific SR-TE policies based on different classification criteria. PBTS benefits Internet service providers (ISPs) that carry voice and data traffic through their networks, who want to route this traffic to provide optimized voice service.

PBTS works by selecting SR-TE policies based on the classification criteria of the incoming packets, which are based on the IP precedence, experimental (EXP), differentiated services code point (DSCP), or type of service (ToS) field in the packet. Default-class configured for paths is always zero (0). If there is no TE for a given forward-class, then the default-class (0) will be tried. If there is no default-class, then the packet is dropped. PBTS supports up to seven (exp 1 - 7) EXP values associated with a single SR-TE policy.

For more information about PBTS, refer to the "Policy-Based Tunnel Selection" section in the MPLS Configuration Guide for Cisco NCS 6000 Series Routers.

The following section lists the steps to configure PBTS for an SR-TE policy.

In BFD, each end of the connection maintains a BFD state and transmits packets periodically over a forwarding path. Seamless BFD (SBFD) is unidirectional, resulting in faster session activation than BFD. The BFD state and client context is maintained on the head-end (initiator) only. The tail-end (reflector) validates the BFD packet and responds, so there is no need to maintain the BFD state on the tail-end.

SBFD runs in an asymmetric behavior, using initiators and reflectors.

The following figure represents the roles of the SBFD initiator and reflector.

A node can be both an initiator and a reflector, if you want to configure different SBFD sessions.

This task explains how to configure local discriminators on the reflector.

Enable mpls oam on the reflector to install a routing information base (RIB) entry for 127.0.0.0/8.

Perform the following configurations on the SBFD initiator.

The SBFD initiator sessions are hosted by the line card CPU.

This task explains how to enable line cards to host BFD sessions.

Map a destination address to a remote discriminator.

Map a Destination Address to a Remote Discriminator

This task explains how to map a destination address to a remote discriminator.

This example shows how to enable SBFD on an SR-TE policy or an SR on-demand (SR-ODN) color template.

This example shows how to enable SBFD on an SR-TE policy.

This example shows how to enable SBFD on an SR-ODN color.

Re-optimization can occur due to the following events:

Additionally, you can configure a timer to specify how often to perform reoptimization of policies. You can also trigger an immediate reoptimization for a specific policy or for all policies.