The following prerequisites are required to implement L2TPv3:

To configure the L2TPv3 feature, you should understand the following concepts:

The following figure shows how the L2TPv3 feature is used to set up VPNs using Layer 2 tunneling over an IP network. All traffic between two customer network sites is encapsulated in IP packets carrying L2TP data messages and sent across an IP network. The backbone routers of the IP network treat the traffic as any other IP traffic and needn’t know anything about the customer networks. 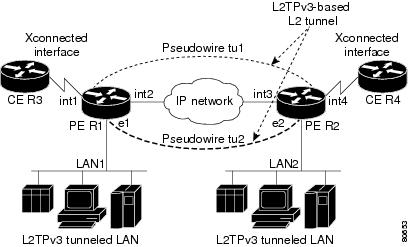 In the above figure the PE routers R1 and R2 provide L2TPv3 services. The R1 and R2 routers communicate with each other using a pseudowire over the IP backbone network through a path comprising the interfaces int1 and int2, the IP network, and interfaces int3 and int4. The CE routers R3 and R4 communicate through a pair of cross-connected Ethernet or 802.1q VLAN interfaces using an L2TPv3 session. The L2TPv3 session tu1 is a pseudowire configured between interface int1 on R1 and interface int4 on R2. Any packet arriving on interface int1 on R1 is encapsulated and sent through the pseudowire control-channel (tu1) to R2. R2 decapsulates the packet and sends it on interface int4 to R4. When R4 needs to send a packet to R3, the packet follows the same path in reverse.

Typically, the L2TP control plane is responsible for negotiating session parameters (such as the session ID or the cookie) to set up the session; however, some IP networks require sessions to be configured so that no signaling is required for session establishment. Therefore, you can set up static L2TPv3 sessions for a PE router by configuring fixed values for the fields in the L2TP data header. A static L2TPv3 session allows the PE to tunnel L2 traffic as soon as the AC to which the session is bound comes up.

A dynamic L2TP session is established through the exchange of control messages containing attribute-value pair (AVP). Each AVP contains information about the nature of the L2 link being forwarded: including the payload type, virtual circuit (VC) ID, and so on.

Multiple L2TP sessions can exist between a pair of PEs, and can be maintained by a single control-channel. Session IDs and cookies are dynamically generated and exchanged as part of a dynamic session setup.

An AC to AC cross-connect, also called local switching, is a building block of L2VPN that allows frames to switch between two different ACs on the same PE. PE (see figure below).

You must configure separate IP addresses for each cross-connect statement on the Carrier Edge router.

The following configurations are supported for local switching: 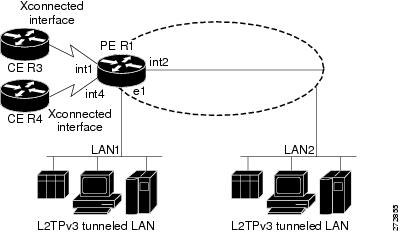 Currently, the following options for packet fragmentation are supported:

When L2 traffic is tunneled across an IP network, information contained in the type of service (ToS) bits may be transferred to the L2TP-encapsulated IP packets in one of the following ways:

If a keepalive mechanism is required, the control plane is used, although it may not be used to bring up sessions. You can manually configure sessions.

The interval between hello messages is configurable per control channel. If one peer detects that the other has gone down through the keepalive mechanism, it sends a StopCCN control message and then notifies all of the pseudowires to the peer about the event. This notification results in the teardown of both manually configured and dynamic sessions.

It is important that you configure an maximum transmission unit (MTU) appropriate for a each L2TPv3 tunneled link. The configured MTU size ensures that the lengths of the tunneled L2 frames fall below the MTU of the destination AC.

L2TPv3 handles the MTU as follows:

The L2TPv3 is a protocol that is used to tunnel a variety of payload types over IP networks. IP security (IPSec) provides an additional level of protection at a service PE router than relying on access control list (ACL) filters. L2TPv3 tunnels are also secured by using IPSec, as specified in RFC3931.

The following scenarios are described to have L2TPv3 work with IPSec:

A PseudoWire (PW) is a bidirectional virtual circuit (VC) connecting two Attached Circuits (ACs). In an MPLS network, PWs are carried inside an LSP tunnel.

A point-to-point (PPP) connection allows service providers to provide a transparent PPP pass-through where the customer-edge routers can exchange the traffic through an end-to-end PPP session. Service providers can offer a virtual leased-line solution, and use the PPP subinterface capability to peer with multiple providers through a single POS connection.

This section includes the tasks required to implement L2TPv3, as follows:

Perform this task to configure a pseudowire class, or template.

This section describes the tasks you must perform to create a template of L2TP control-channel parameters that can be inherited by different pseudowire classes. The three main parameters described are:

The three main groups of L2TP control-channel parameters that you can configure in an L2TP class are described in the following subsections:

The principal difference between the L2TPv3 Control Message Hashing feature and CHAP-style L2TP control-channel authentication is that, instead of computing the hash over selected contents of a received control message, the L2TPv3 Control Message Hashing feature uses the entire message in the hash. In addition, instead of including the hash digest in only the SCCRP and SCCCN messages, it includes it in all messages.

Configuring Authentication for the L2TP Control-Channel

Enabling the L2TPv3Control Message Hashing feature will impact performance during control-channel and session establishment because additional digest calculation of the full message content is required for each sent and received control message. This is an expected trade-off for the additional security afforded by this feature. In addition, network congestion may occur if the receive window size is too small. If the L2TPv3 Control Message Hashing feature is enabled, message digest validation must be enabled. Message digest validation deactivates the data path received sequence number update and restricts the minimum local receive window size to 35.

Perform this task to configure the interval used for hello messages in an L2TP class.

Perform this task to configure a dynamic L2TPv3 pseudowire.

Perform this task to configure a static L2TPv3 pseudowire.

The following example shows a pseudowire class configuration on a PE router:

The following example shows how to configure an interface to operate in Layer 2 transport mode: