Internet Protocol version 6 (IPv6) expands the number of network address bits from 32 bits (in IPv4) to 128 bits, which provides more than enough globally unique IP addresses for every networked device on the planet. The unlimited address space provided by IPv6 allows Cisco to deliver more and newer applications and services with reliability, improved user experience, and increased security.

IPv6, formerly named IPng (next generation), is the latest version of the Internet Protocol (IP). IP is a packet-based protocol used to exchange data, voice, and video traffic over digital networks. IPv6 was proposed when it became clear that the 32-bit addressing scheme of IP version 4 (IPv4) was inadequate to meet the demands of Internet growth. After extensive discussion it was decided to base IPng on IP but add a much larger address space and improvements such as a simplified main header and extension headers. IPv6 is described initially in RFC 2460, Internet Protocol, Version 6 (IPv6) Specification, issued by the Internet Engineering Task Force (IETF). Further RFCs describe the architecture and services supported by IPv6.

The primary motivation for IPv6 is the need to meet the demand for globally unique IP addresses. IPv6 quadruples the number of network address bits from 32 bits (in IPv4) to 128 bits, which provides more than enough globally unique IP addresses for every networked device on the planet. By being globally unique, IPv6 addresses inherently enable global reachability and end-to-end security for networked devices, functionality that is crucial to the applications and services that are driving the demand for the addresses. Additionally, the flexibility of the IPv6 address space reduces the need for private addresses; therefore, IPv6 enables new application protocols that do not require special processing by border devices at the edge of networks.

IPv6 addresses are represented as a series of 16-bit hexadecimal fields separated by colons (:) in the format: x:x:x:x:x:x:x:x. Following are two examples of IPv6 addresses:

A double colon may be used as part of the ipv6-address argument when consecutive 16-bit values are denoted as zero. You can configure multiple IPv6 addresses per interfaces, but only one link-local address.

An IPv6 address prefix, in the format ipv6-prefix/prefix-length, can be used to represent bit-wise contiguous blocks of the entire address space. The ipv6-prefix must be in the form documented in RFC 2373 where the address is specified in hexadecimal using 16-bit values between colons. The prefix length is a decimal value that indicates how many of the high-order contiguous bits of the address comprise the prefix (the network portion of the address). For example, 2001:DB8:8086:6502::/32 is a valid IPv6 prefix.

When IPv6 or IPv4 command output displays an IPv6 address, a long IPv6 address can overflow into neighboring fields, causing the output to be difficult to read. The output fields were designed to work with the longest possible IPv4 address, which has 15 characters; IPv6 addresses can be up to 39 characters long. The following scheme has been adopted in IPv4 and IPv6 commands to allow the appropriate length of IPv6 address to be displayed and move the following fields to the next line, if necessary. The fields that are moved are kept in alignment with the header row.

The basic IPv6 packet header has 8 fields with a total size of 40 octets (320 bits) (see the figure below). Fields were removed from the IPv6 header because, in IPv6, fragmentation is not handled by devices and checksums at the network layer are not used. Instead, fragmentation in IPv6 is handled by the source of a packet and checksums at the data link layer and transport layer are used. (In IPv4, the UDP transport layer uses an optional checksum. In IPv6, use of the UDP checksum is required to check the integrity of the inner packet.) Additionally, the basic IPv6 packet header and Options field are aligned to 64 bits, which can facilitate the processing of IPv6 packets. 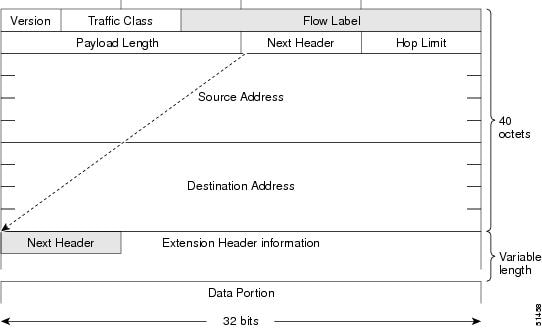 The table below lists the fields in the basic IPv6 packet header.

The table below lists the extension header types and their Next Header field values.

Multiple IPv6 prefixes can be assigned to networks and hosts. Having multiple prefixes assigned to a network allows that network to connect easily to multiple ISPs without breaking the global routing table (see the figure below). 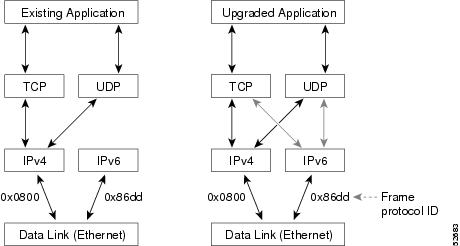 In the figure below, an application that supports dual IPv4 and IPv6 protocol stacks requests all available addresses for the destination hostname www.example.com from a DNS server. The DNS server replies with all available addresses (both IPv4 and IPv6 addresses) for www.example.com. The application chooses an address (in most cases, IPv6 addresses are the default choice), and connects the source node to the destination using the IPv6 protocol stack.

How to Configure IPv6 Addressing and Basic Connectivity

Perform this task to assign IPv6 addresses to individual device interfaces and enable IPv6 traffic forwarding globally on the device. By default, IPv6 addresses are not configured and IPv6 routing is disabled.

A name server is used to track information associated with domain names. A name server can maintain a database of hostname-to-address mappings. Each name can map to one or more IPv4 addresses, IPv6 addresses, or both address types. In order to use this service to map domain names to IPv6 addresses, you must specify a name server and enable the DNS, which is the global naming scheme of the Internet that uniquely identifies network devices.

Cisco software maintains a cache of hostname-to-address mappings for use by the connect, telnet, and ping commands, related Telnet support operations, and many other commands that generate command output. This cache speeds the conversion of names to addresses.

Similar to IPv4, IPv6 uses a naming scheme that allows a network device to be identified by its location within a hierarchical name space that provides for domains. Domain names are joined with periods (.) as the delimiting characters. For example, Cisco is a commercial organization that is identified by a com domain name, so its domain name is cisco.com. A specific device in this domain, the FTP server, for example, is identified as ftp.cisco.com.

In the following example, IPv6 is enabled on the device with both a link-local address and a global address based on the IPv6 prefix 2001:DB8:c18:1::/64. The EUI-64 interface ID is used in the low-order 64 bits of both addresses. Output from the show ipv6 interface command is included to show how the interface ID (260:3EFF:FE47:1530) is appended to the link-local prefix FE80::/64 of Gigabit Ethernet interface 0/0/0.

The following example enables the forwarding of IPv6 unicast datagrams globally on the device and configures Gigabit Ethernet interface 0/0/0 with both an IPv4 address and an IPv6 address:

How to Configure IPv6 Anycast Address