The Cisco ASR 9000 Series Aggregation Services Routers now supports a scenario when the provider backbone bridge is a VPLS network. You can now configure pseudowires in the PBB edge bridge domain and core bridge domain. In either type of bridge domain, the pseudowire functionality remains the same as in the native bridge domain.

To implement 802.1ah, you must understand these concepts:

The benefits of IEEE 802.1ah provider backbone bridges are as follows: 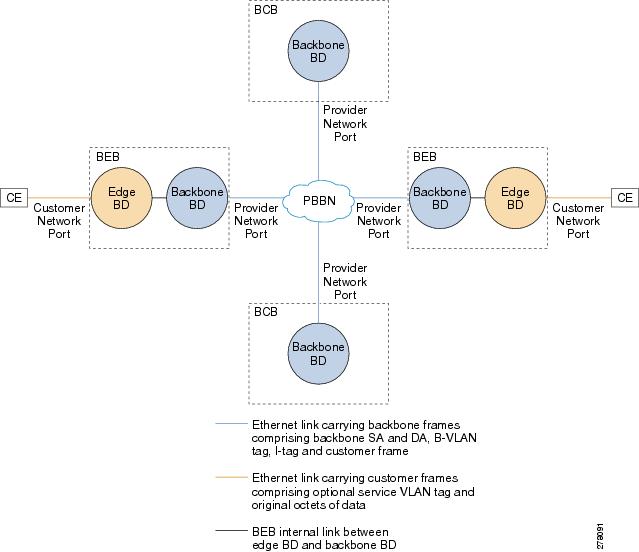 The IEEE 802.1ah standard specifies these three types of BEBs:

The IB-BEB contains both the I-Component and the B-Component. The bridge selects the B-MAC and inserts the I-SID based on the provider VLAN tag (S-tag), the customer VLAN tag (C-tag), or both the S-tag and the C-tag. It validates the I-SIDs and it transmits and receives frames on the B-VLAN.

The IEEE 802.1ah on Provider Backbone Bridges feature supports all services mandated by the IEEE 802.1ah standard and extends the services to provides these additional functionalities: 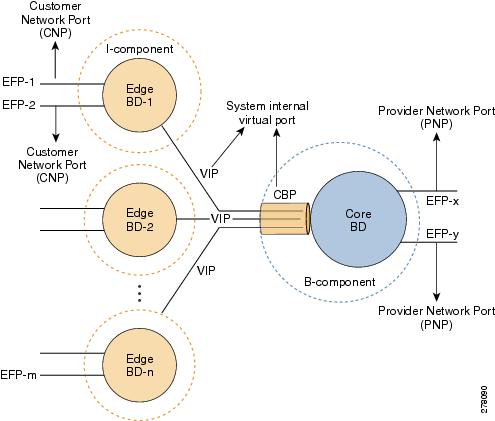 The 802.1Qbe—Multiple I-SID Registration Protocol (MIRP) standard provides the ability to flush learned MAC address registration entries held in the filtering database of an I-component on a per I-SID basis. The backbone service instance identifier (I-SID) is a field in the backbone service instance tag which identifies the backbone service instance of a frame. MIRP defines mechanisms for I-SID flushing, and has the required capabilities to handle topology changes that occur in networks attached to a provider backbone bridged network. A backbone edge bridge (BEB) signals to other potentially affected BEBs, the need to alter certain learned associations between customer MAC addresses and backbone MAC addresses. In the absence of MIRP, customer connections across a provider backbone network can take several minutes to restore connectivity after a topology change in an access network.

In prior releases, PBB traffic was dropped for a MAC aging cycle when bridge forwarding topology changes occurred (due to unavailable ports or spanning tree topology changes) in a PBB edge bridge domain. This resulted in severe limitations for the use of PBB bridges.

Cisco ASR 9000 Series Aggregation Services Routers now support a simplified implementation of the MIRP protocol known as the Multiple I-SID Registration Protocol Lite (MIRP-Lite). The MIRP-Lite feature enables detection of a topology change at a site. A specially defined packet is flooded to all remote edge sites of the PBB network when a site detects a topology change. At the sender site, I-SID of the I-component is placed in the I-TAG of the frame header to specify the I-SID that needs a MAC flush. At the receiver site, each PBB edge switch performs I-SID checking. If the I-SID matches one of the I-components, the MAC in the I-component is flushed.

The use of MIRP in 802.1ah networks is illustrated in the following figure. 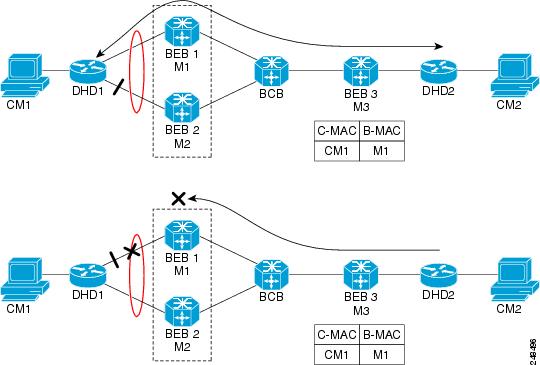 To circumvent the dropping of traffic when the link between DHD1 and BEB1 fails, BEB2 performs two tasks:

The following figure shows the operation of the MIRP. 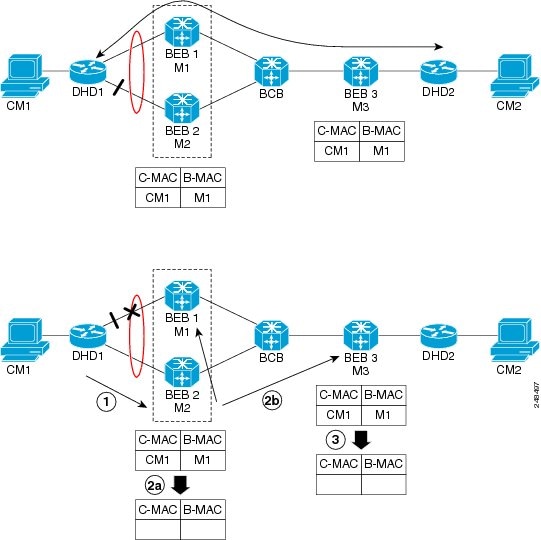 The Provider Backbone Bridging Ethernet VPN (PBB-EVPN) is a next generation L2VPN solution that addresses resiliency and forwarding policy requirements. This feature also introduces advanced multihoming options, support for multipath and user-defined BGP policy capabilities to Ethernet L2VPNs. PBB-EVPN uses BGP for MAC address distribution and learning over the packet-switched network (PSN). PBB-EVPN is a combination of the capabilities of PBB and Ethernet VPN that addresses these Carrier Ethernet and data center interconnect requirements:

Ethernet Virtual Private Network (EVPN) is a solution for secure and private connectivity of multiple sites within an organization. The EVPN service extends the benefits of Ethernet technology to the Wide Area Network (WAN). This service is delivered over MPLS networks. 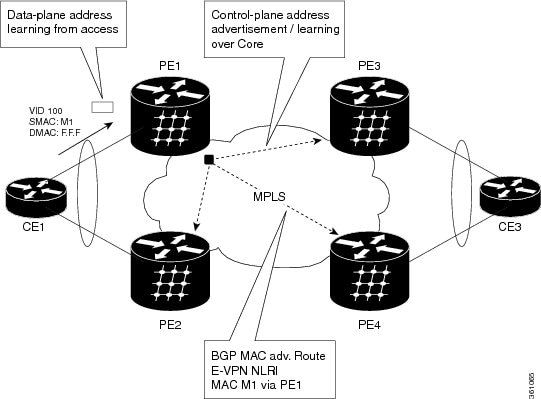 In the above figure, the provider edge (PE) routers run multi-protocol BGP to advertise and learn MAC addresses over MPLS. The customer MAC addresses are learnt in the data plane over attachment circuits (links connecting customer devices to the PEs). Then, the MAC addresses are distributed over MPLS using BGP with an MPLS label identifying the EVPN instance.

The PBB-EVPN solution combines Ethernet Provider Backbone Bridging (PBB - IEEE 802.1ah) with Ethernet VPN where, PEs perform as PBB Backbone Edge Bridge (BEB). The PEs receive 802.1Q Ethernet frames from their attachment circuits. These frames are encapsulated in the PBB header and forwarded over the IP/MPLS core. On the egress side (EVPN PE), the PBB header is removed after MPLS disposition, and the original 802.1Q Ethernet frame is delivered to the customer equipment.

The PE routers perform these functions:

For PBB EVPN, the B-MAC flush is per I-SID per Ethernet VPN Instance (EVI).

E-VPN Instance (EVI) identifies a VPN in the MPLS/IP network. There can only be one EVI per core bridge.

The following figure illustrates an example of Ethernet segment and ESI.

The Designated Forwarder (DF) election mechanism is used to determine a designated forwarder in dual-homed or multi-homed devices or networks. The election is performed on a per service basis. The DF filtering function for MHN differs from that for MHD in:

The following figure shows the various DF filtering rules for MHN and MHD. 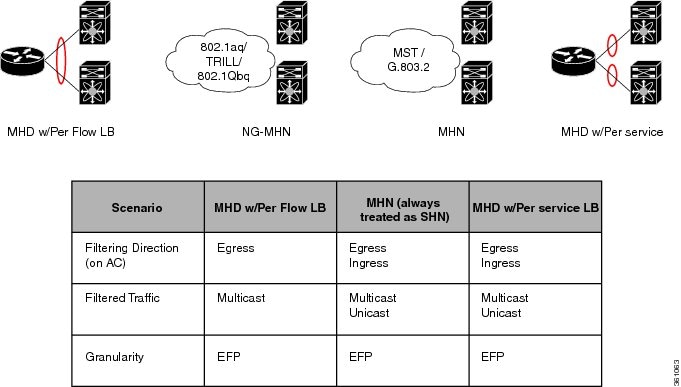 In a PBB network, traffic (unknown unicast, multicast, or broadcast) is flooded to all the PE devices in the network even if the devices do not host the service instance to which the traffic is destined.

The Multiple MAC Registration Protocol (MMRP) for PBB VPLS Flood Optimization feature optimizes the impact of the flooded traffic on PE devices by sending the traffic only to the PE devices interested in a particular service instance.

In a PBB over VPLS network, traffic between the PE devices flows over MPLS pseudo-wires that connect all the PE devices in a full mesh network topology.

The MMRP is used by the PE devices to inform each other about the set of group B-MAC addresses corresponding to the I-SIDs of the service instances they host. This enables each device to determine which set of pseudo-wires flooded traffic should be forwarded on, that is, those pseudo-wires on which an MMRP registration has been received for the group B-MAC address corresponding to the I-SID.

To configure the PBB-VPLS flood optimization feature, do the following:

This section contains these procedures:

The following features are not supported:

Perform this task to configure a PBB edge domain and the service ID.

Perform this task to configure the PBB core bridge domain.

Perform this task to configure the backbone VLAN tag under the PBB core bridge domain.

Perform this task to configure the backbone source MAC address.

Perform this task to configure the unknown unicast backbone MAC under the PBB edge bridge domain.

This section provides information on:

As a pre-requisite, a PBB-EVPN provider edge (PE) must be configured with PBB Edge Bridge Domains which in one side are associated to ethernet flow points matching traffic from access interfaces and on the other side are linked to PBB Core Bridge Domains for traffic forwarding through the core.

Explicit configuration of Ethernet Segment parameters such as ESI and service carving behaviors (manual or dynamic) is required only for Dual Homed scenarios with Active/Active per Service load-balancing.

Perform this task to configure the EVPN Ethernet segment.

By default, these parameters are auto-derived from the PE's configuration:

Perform this task to overwrite the auto-generated BGP RD/RT values.

Perform this task to configure per Ethernet segment timers.

A prerequisite of PBB-EVPN involves enabling the new EVPN address family under the BGP routing process and under BGP neighbor submode. For more information on BGP, refer to the Implementing BGP module in the Cisco ASR 9000 Series Aggregation Services Router Routing Configuration Guide.

This section provides these configuration examples:

This example shows how to configure Ethernet flow points:

This example shows how to configure the PBB edge bridge domain:

This example shows how to configure the PBB core bridge domain:

This example shows how to configure the backbone VLAN tag:

This example shows how to configure the backbone source MAC address:

This example shows how to configure static mapping and unknown unicast MAC address under the PBB edge bridge domain:

This example shows you how to configure PBB VPLS.

The MIRP feature is enabled by default. However, MIRP packets are sent when the attachment circuit is not functional and you have configured mac withdraw state-down as shown:

However, if you have not configured mac withdraw state-down, then MIRP packets are sent when the attachment circuit is functional.