This chapter provides an overview of the Broadband Network Gateway (BNG) functionality implemented on the Cisco ASR 9000 Series Router.

Broadband Network Gateway (BNG) is the access point for subscribers, through which they connect to the broadband network. When a connection is established between BNG and Customer Premise Equipment (CPE), the subscriber can access the broadband services provided by the Network Service Provide (NSP) or Internet Service Provider (ISP).

BNG is deployed by the service provider and is present at the first aggregation point in the network, such as the edge router. An edge router, like the Cisco ASR 9000 Series Router, needs to be configured to act as the BNG. Because the subscriber directly connects to the edge router, BNG effectively manages subscriber access, and subscriber management functions such as:

Some benefits of using BNG are: 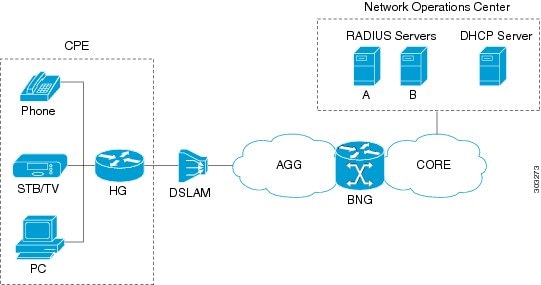 The BNG architecture is designed to perform these tasks:

The four BNG tasks are briefly explained in the following sections.

Connecting with the CPE

BNG connects to the CPE through a multiplexer and Home Gateway (HG). The CPE represents the triple play service in telecommunications, namely, voice (phone), video (set top box), and data (PC). The individual subscriber devices connect to the HG. In this example, the subscriber connects to the network over a Digital Subscriber Line (DSL) connection. Therefore, the HG connects into a DSL Access Multiplexer (DSLAM).

Multiple HGs can connect to a single DSLAM that sends the aggregated traffic to the BNG router. The BNG router routes traffic between the broadband remote access devices (like DSLAM or Ethernet Aggregation Switch) and the service provider network.

Each subscriber (or more specifically, an application running on the CPE) connects to the network by a logical session. Based on the protocol used, subscriber sessions are classified into two types:

Interacting with the RADIUS Server

The RADIUS server contains a complete database of all subscribers of a service provider, and provides subscriber data updates to the BNG in the form of attributes within RADIUS messages. BNG, on the other hand, provides session usage (accounting) information to the RADIUS server. For more information about RADIUS attributes, see RADIUS Attributes.

Interacting with the DHCP Server

BNG relies on an external Dynamic Host Configuration Protocol (DHCP) server for address allocation and client configuration functions. BNG can connect to more than one DHCP server to have fail over redundancy in the addressing process. The DHCP server contains an IP address pool, from which it allocates addresses to the CPE.

During the interaction between BNG and the DHCP server, BNG acts as a DHCP relay or DHCP proxy.

As the DHCP relay, BNG receives DHCP broadcasts from the client CPE, and forwards the request to the DHCP server.

As the DHCP proxy, BNG itself maintains the address pool by acquiring it from DHCP server, and also manages the IP address lease. BNG communicates on Layer 2 with the client Home Gateway, and on Layer 3 with the DHCP server.

The role of BNG is to pass traffic from the subscriber to the ISP. The manner in which BNG connects to the ISP depends on the model of the network in which it is present. There are two types of network models:

The following figure shows the topology of a Network Service Provider model.

In the Network Service Provider model, the ISP (also called the retailer) directly provides the broadband connection to the subscriber. As shown in the above figure, BNG is at the edge router, and its role is to connect to the core network through uplinks.

The following figure shows the topology of a Access Network Provider model.

BNG is implemented by the network carrier and its role is to hand the subscriber traffic off to one of several ISPs. The hand-off task, from the carrier to the ISP, is implemented by Layer 2 Tunneling Protocol (L2TP) or Layer 3 Virtual Private Networking (VPN). L2TP requires two distinct network components:

The BNG pie, asr9k-bng-px.pie can be installed and activated on the Cisco ASR 9000 Series Router to access the BNG features. The install, uninstall, activate and deactivate operations can be performed without rebooting the router.

It is recommended that the relevant BNG configurations be removed from the running configuration of the router, before uninstalling or deactivating the BNG pie.

Perform this task to install and activate the BNG pie on the Cisco ASR 9000 Series Router:

To use a BNG command, you must be in a user group associated with a task group that includes the proper task IDs. The Cisco ASR 9000 Series Aggregation Services Router Broadband Network Gateway Command Reference guide includes the task IDs required for each command. If you suspect that the user group assignment is preventing you from using a command, contact your AAA administrator for assistance.

The Select VRF Download (SVD) must be disabled, when BNG is configured. For more information about SVD, see the Cisco IOS XR Routing Configuration Guide for the Cisco XR 12000 Series Router.

The BNG interoperability allows BNG to exchange and use information with other larger heterogeneous networks. These are the key features:

BNG supports Cisco Smart Software Licensing that provides a simplified way for the customers to purchase licenses and to manage them across their network. This provides a customizable consumption-based model that aligns to the network growth of the customer. It also provides the flexibility to quickly modify or upgrade software feature configurations to deploy new services over time. Cisco ASR 9000 Series Routers

For latest updates, refer the latest version of guides present in http:/​/​www.cisco.com/​c/​en/​us/​support/​ios-nx-os-software/​ios-xr-software/​products-installation-and-configuration-guides-list.html.

These are the software license PIDs for BNG:

You can use the show sessionmon license command to display the subscriber session statistics.