The Cisco NCS 4201 family has the following capability:

The following table provides a snapshot of the number and type of supported ports:

Front and Back Panel 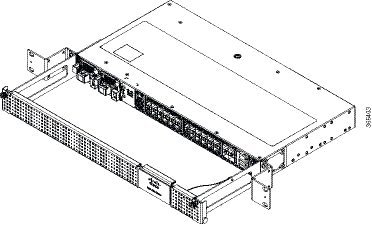 The table below describes the other features of Cisco NCS 4201 (AC and DC).

The Cisco NCS 4201 have these external physical interfaces on the front panel:

The network interfaces are provided through fixed ports.

Each alarm input can be provisioned as critical, major, or minor.

The Cisco NCS 4201 have the following management interfaces:

A single USB 2.0 Type-A receptacle is provided on the front panel of the Cisco NCS 4201 for providing console access to ROMMON, Cisco IOS-XE and diagnostics. While it uses the Type-A connector, it operates as a USB peripheral only for connection to an external host computer. This interface requires the use of a Type-A to Type-A connector instead of a standard USB cable.

A single USB 2.0 Type-A receptacle is provided on the front panel of the Cisco NCS 4201 for inserting external USB mass storage devices, such as standard USB flash drives. This interface is used to load images, load or store configurations, write logs, and so on. It supports operation up to 12Mbps.

Maximum memory supported in ROMmon is 8GB and in Cisco IOS is 16GB.

The Cisco NCS 4201 support either AC or DC power supplies in a 1+1 redundant configuration. The PSUs are hot-swappable. Load is shared between PSUs when both the PSUs are inserted and powered-up. Status LED provided on both AC and DC PSU indicates the status and output condition.

The Cisco NCS 4201 has removable fan tray as part of the system. The fan tray is hot-swappable. The system is designed to operate at its maximum operating temperature of 70º C and at 65º C in case of failure of a single fan, for a maximum of four hours.

This section describes the different types of LEDs and their behavior.

The PWR and STAT LEDs are available on the front panel. These LEDs provide power on the board (PWR) and overall chassis health (STAT) status. During power up state, these LEDs provide booting status and report errors.

Each SFP+ port has an LED indicator.

Each power supply unit has a corresponding LED on the front panel.