SSO is particularly useful at the network edge. Traditionally, core routers protect against network faults using router redundancy and mesh connections that allow traffic to bypass failed network elements. SSO provides protection for network edge devices with dual route processors (RPs) that represent a single point of failure in the network design, and where an outage might result in loss of service for customers.

Because SSO maintains stateful protocol and application information, the user session information is maintained during a switchover. Line cards continue to forward network traffic with no loss of sessions, providing improved network availability.

SSO provides faster switchover by fully initializing and configuring the standby fabric card, and by synchronizing state information, which reduces the time required for routing protocols to converge. The CPT 50 panel that is connected directly to the active fabric card will be disconnected due to SSO.

SSO enables the system to keep all the sessions of HA-aware protocols up during a switchover. This ensures that the services are not affected during switchovers and upgrades.

Two fabric cards must be installed on the CPT 200 and CPT 600 shelf.

For NSF support, neighboring routers must run NSF-enabled images, though SSO need not be configured on the neighboring device.

When the fabric card or line card crashes during SSO, the crash handler shuts down the laser signal on the front ports of the card. The far end detects loss of signal on this path and switches to the protection path if available.

Both the fabric cards must be running the same configuration so that the standby fabric card is always ready to assume control if the active fabric card fails.

When a system with SSO is initialized, the active fabric card performs a chassis discovery (discovery of the number and type of line cards and fabric cards in the system) and parses the startup configuration file.

Even though the standby fabric card is fully initialized, it interacts only with the active fabric card to receive incremental changes to the configuration files as they occur.

The various counters and statistics maintained in the active fabric card are reset during a switchover and are not synchronized with the standby fabric card.

During switchover, the system control and routing protocol execution are transferred from the active fabric card to the standby fabric card.

The following conditions cause a switchover from the active fabric card to the standby fabric card:

The following conditions will not cause a switchover from the active fabric card to the standby fabric card:

The fabric card can be in one of the following states during the switchover.

The active fabric card moves to one of the above states after the switchover.

Verify that SSO Is Configured

The following examples verify that SSO is configured on the device.

This section describes the possible situations in which SSO troubleshooting may be needed.

The following commands do not have to be entered in any specific order.

The following protocols and applications are SSO aware:

The redundant fabric cards run in an active-standby control model. However, both the fabric cards have ports that carry active traffic.

AADP provides the following benefits for the CPT System:

Nonstop Forwarding (NSF) works with the Stateful Switch Over (SSO) feature to minimize the amount of time a network is unavailable following a switchover. The main objective of the NSF is to continue forwarding IP packets after the switchover of the active fabric card.

When a networking device restarts, all the routing peers of that device usually detect that the device went down and then came back up. This down-to-up transition results in routing flap, which could spread across multiple routing domains. Routing flaps caused by routing restarts create routing instabilities, which are detrimental to the overall network performance. NSF helps to suppress routing flaps and improves the network stability.

NSF allows for the forwarding of data packets to continue along known routes while the routing protocol information is being restored following a switchover. With NSF, peer networking devices do not experience routing flaps. Data traffic is forwarded through intelligent line cards while the standby fabric card assumes control from the failed active fabric card during a switchover. The ability of line cards to remain up during the switchover and to be kept current with the FIB on the active fabric card is key to NSF operation. The CPT 50s connected to the fabric card will have an impact on the traffic. 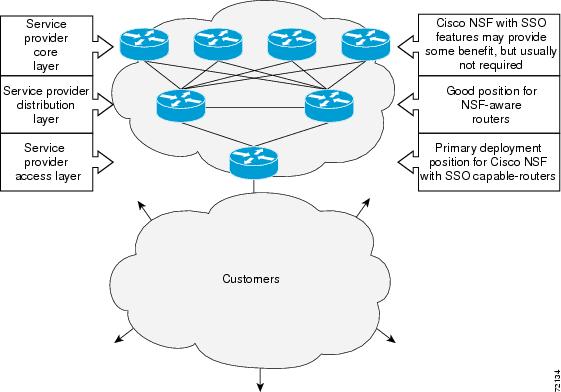 Additional levels of availability may be gained by deploying NSF with SSO at other points in the network where a single point of failure exists. The following figure illustrates an optional deployment strategy that applies NSF with SSO at the enterprise network access layer. In this example, each access point in the enterprise network represents another single point of failure in the network design. In the event of a switchover or a planned software upgrade, enterprise customer sessions would continue uninterrupted throughout the network. 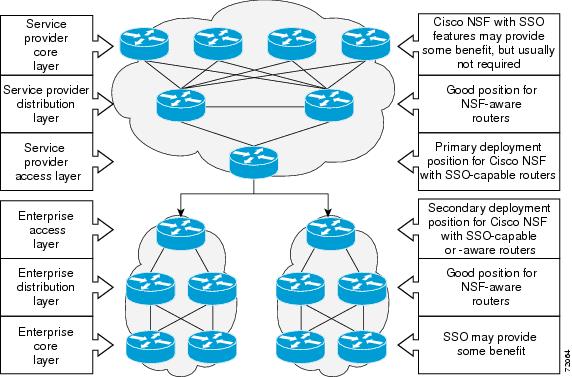 The NSF feature has the following benefits:

Cisco had implemented the proprietary Cisco NSF. The Graceful OSPF Restart feature supports IETF NSF for OSPF processes in multivendor networks. The NSF device modes of operation common to the Cisco and IETF NSF implementations are as follows:

Examples of the NSF Configuration

The following example shows how to verify that Cisco Express Forwarding is NSF-capable.

The following example shows how to configure OSPF for NSF on a networking device.

To verify OSPF for NSF, check whether the NSF is configured on the SSO enabled networking device. Verify that “nsf” appears in the OSPF configuration of the SSO-enabled device by entering the show running-config command:

Next, use the show ip ospf command to verify that NSF is enabled on the device.

The following commands do not have to be entered in any specific order.

Software upgrade is an important consideration for high availability. CPT supports the In-Service Software Upgrade (ISSU) process to perform planned software upgrades within the HA system. ISSU provides the ability to perform a stateful upgrade even when both the fabric cards are of different versions. ISSU is built over the SSO infrastructure.

The software upgrade is always done at the node level and not directly on the CPT cards. When the package is upgraded, CPT cards must also upgrade to the Cisco IOS image present in the new package. Reverting to the earlier version of the software must be done for all the cards in the shelf and not just for CPT cards.

The Transport Node Controller (TNC) card stores the required images in its flash memory and manages the software upgrade process for all the cards.

SSO and ISSU work together to ensure that the states and configuration of the CPT cards are maintained before and after the upgrade.

The following upgrade activities take place sequentially in a system that has a single fabric card. However, it is recommended that two fabric cards are used in the system.

The following upgrade activities take place sequentially in a system that has two fabric cards:

The above upgrade duration is calculated based on average boot delays. The delays due to ROM MONitoring (ROMMON) and Field Programmable Gate Array (FPGA) upgrades are not accounted in this calculation.

The following commands display the ISSU status details of a client.

For more information on these commands, see the Cisco CPT Command Reference Guide.

LDP graceful restart must be enabled for LDP to be HA compliant. Graceful restart helps to preserve the MPLS forwarding table entries built by LDP over a SSO.