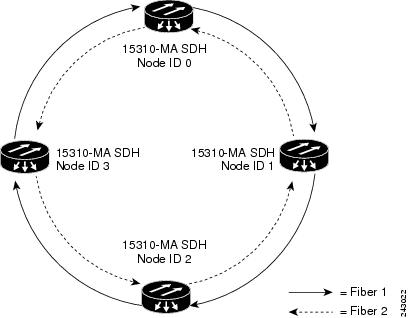 If a fiber break occurs (Figure 9-2), Node ID 2 switches its active receiver to the protect signal coming through Node ID 3. You can configure Cisco ONS 15310-MAs in a terminal point-to-point network (two nodes) or as a line of add/drop multiplexers (ADMs) (3 or more nodes) by configuring the STMN ports as the working path and a second set as the protect path. Unlike rings, terminal and linear ADMs require that the STMN port at each node be in 1+1 protection to ensure that a break to the working line is automatically routed to the protect line. 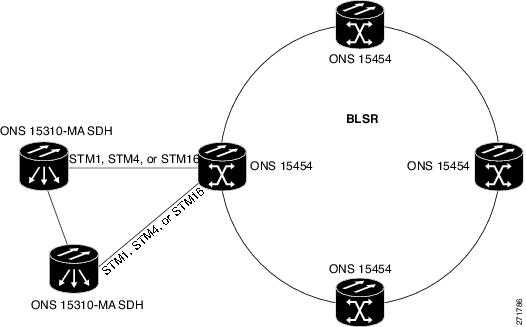 In addition to single Linear Multiplex Section Protection (LMSP) configurations, terminal point-to-point or linear ADMs, you can extend ONS 15310-MA SDH traffic protection by creating path-protected mesh networks (PPMNs). PPMNs include multiple ONS 15310-MA SDH topologies and extend the protection provided by a single LMSP configuration to the meshed architecture of several interconnecting rings. In a PPMN, circuits travel diverse paths through a network of single or multiple meshed rings. When you create circuits, CTC can automatically route circuits across the PPMN or you can manually route them. You can also choose levels of circuit protection. For example, if you choose full protection, CTC creates an alternate route for the circuit in addition to the main route. The second route follows a unique path through the network between the source and destination and sets up a second set of cross-connections. For example, in Figure 9-9, a circuit is created from Node 3 to Node 9. CTC determines that the shortest route between the two nodes passes through Node 8 and Node 7, shown by the dotted line, and automatically creates cross-connections at Nodes 3, 8, 7, and 9 to provide the primary circuit path. 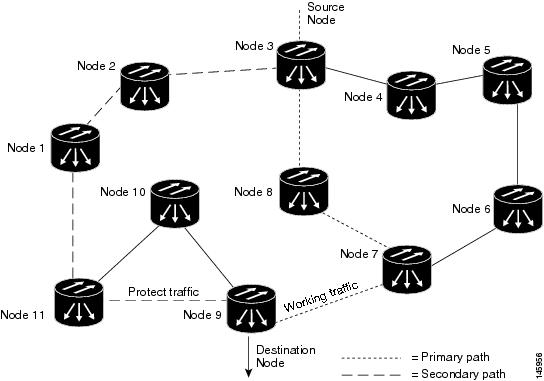 You can link multiple ONS 15310-MA SDH nodes using their STMN ports (also known as creating a fiber-optic bus) to accommodate more access traffic than a single ONS 15310-MA SDH can support. You can link nodes with STMN fiber spans as you would link any other two network nodes. The nodes can be grouped in one facility to aggregate more local traffic.

When performing span upgrades, Cisco recommends that you upgrade all spans in a network consecutively and in the same maintenance window. Until all spans are upgraded, mismatched PPM types will be present.

If you are upgrading two ONS 15310-MA SDH nodes with 1+1 protection from STM1 to STM4, STM4 to STM16, or STM1 to STM16, Cisco recommends using the Span Upgrade Wizard to perform span upgrades. Although you can also use the manual span upgrade procedures, the manual procedures are mainly provided as error recovery for the wizard. The Span Upgrade Wizard and the manual span upgrade procedures require at least two technicians (one at each end of the span) who can communicate with each other during the upgrade. Upgrading a span is non-service affecting and will cause no more than three switches, each of which is less than 50 ms in duration. To initiate the span upgrade, right-click the span and choose Span Upgrade.

Downgrading can be performed to back out of a span upgrade. The procedure for downgrading is the same as upgrading except that you provision a lower-rate PPM (STM1 or STM4 for the 15310-MA SDH) and install a lower-rate PPM (if you are not using a multi-rate PPM). You cannot downgrade if circuits exist on the VCs that will be removed (the higher VCs).

A typical path protected overlay ring configuration is shown in Figure 9-11, where the circuit traverses the nodes B, D, and F twice resulting in two cross-connections on these nodes for the same circuit. In Figure 9-11, the circuits on the STM4 path are unprotected. The DS3 drop traffic is protected on the drop nodes by provisioning a primary and secondary destination, making it a path protected circuit. 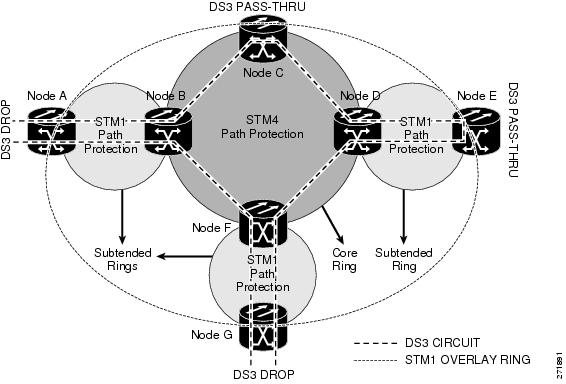