The CE-100T-8 card has eight front-end Ethernet ports which use standard RJ-45 connectors for 10BASE-T Ethernet/100BASE-TX Ethernet media. Ethernet Ports 1 through 8 each map to a POS port with a corresponding number. The console port on the CE-100T-8 card is not functional.

The CE-100T-8 cards forward valid Ethernet frames unmodified over the SONET network. Information in the headers is not affected by the encapsulation and transport. For example, included IEEE 802.1Q information will travel through the process unaffected.

The ONS 15454 CE-100T-8 and the ONS 15310 CE-100T-8 support maximum Ethernet frame sizes of 1600 bytes including the CRC. The MTU size is not configureable and is set at a 1500 byte maximum (standard Ethernet MTU). Baby giant frames in which the standard Ethernet frame is augmented by 802.1 Q tags or MPLS tags are also supported. Full Jumbo frames (9000 byte maximum) are not supported.

Many Ethernet attributes are also available through the network element default feature. For more information on NE defaults, refer to the "Network Element Defaults" appendix in the Cisco ONS 15454 Reference Manual.

On the CE-100T-8, Ethernet link autonegotiation is on by default. The user can also set the link speed, duplex, and flow control manually under the card-level Provisioning tab of CTC.

The pause frame instructs the source to stop sending packets for a specific period of time. The sending station waits the requested amount of time before sending more data. Figure 17-2 illustrates pause frames being sent and received by CE-100T-8 cards and attached switches.

This flow-control mechanism matches the sending and receiving device throughput to that of the bandwidth of the STS circuit. For example, a router might transmit to the Ethernet port on the CE-100T-8 card. This particular data rate might occasionally exceed 51.84 Mbps, but the SONET circuit assigned to the CE-100T-8 port might be only STS-1 (51.84 Mbps). In this example, the CE-100T-8 sends out a pause frame and requests that the router delay its transmission for a certain period of time. With flow control and a substantial per-port buffering capability, a private line service provisioned at less than full line rate capacity (STS-1) is efficient because frame loss can be controlled to a large extent.

The CE-100T-8 supports end-to-end Ethernet link integrity (Figure 17-3). This capability is integral to providing an Ethernet private line service and correct operation of Layer 2 and Layer 3 protocols on the attached Ethernet devices.

Failure of the entire path is ensured by turning off the transmit pair at each end of the path. The attached Ethernet devices recognize the disabled transmit pair as a loss of carrier and consequently an inactive link or link fail.

The CE-100T-8 supports the Enhanced State Model (ESM) for the Ethernet ports, as well as for the SONET circuit. For more information about the ESM, refer to the "Administrative and Service States" appendix in the Cisco ONS 15454 Reference Manual.

The Ethernet ports can be set to the ESM service states including the In-Service, Automatic In-Service (IS,AINS) administrative state. IS,AINS initially puts the port in the Out-of-Service and Autonomous, Automatic In-Service (OOS-AU,AINS) state. In this service state, alarm reporting is suppressed, but traffic is carried and loopbacks are allowed. After the soak period passes, the port changes to In-Service and Normal (IS-NR). Raised fault conditions, whether their alarms are reported or not, can be retrieved on the CTC Conditions tab or by using the TL1 RTRV-COND command.

Two Ethernet port alarms/conditions, CARLOSS and TPTFAIL, can prevent the port from going into service. This occurs even though alarms are suppressed when a CE-100T-8 circuit is provisioned with the Ethernet ports set to the IS,AINS state, because the CE-100T-8 link integrity function is active and ensures that the links at both ends are not enabled until all SONET and Ethernet errors along the path are cleared. As long as the link integrity function keeps the end-to-end path down, both ports will have at least one of the two conditions needed to suppress the AINS-to-IS transition. Therefore, the ports will remain in the AINS state with alarms suppressed.

ESM also applies to the SONET circuits of the CE-100T-8 card. If the SONET circuit is set up in IS,AINS state and the Ethernet error occurs before the circuit transitions to IS, then link integrity will also prevent the circuit transition to the IS state until the Ethernet port errors are cleared at both ends. The service state will be OOS-AU,AINS as long as the administrative state is IS,AINS. When there are no Ethernet or SONET errors, link integrity enables the Ethernet port at each end. Simultaneously, the AINS countdown begins as normal. If no additional conditions occur during the time period, each port transitions to the IS-NR state. During the AINS countdown, the soak time remaining is available in CTC and TL1. The AINS soaking logic restarts from the beginning if a condition appears again during the soak period.

Because these priorities are placed on separate queues, the priority queuing feature should not be used to separate rate-based CIR/EIR marked traffic (sometimes done at a Metro Ethernet service provider edge). This could result in out-of-order packet delivery for packets of the same application, which would cause performance issues with some applications.

For an IP ToS-tagged packet, the CE-100T-8 can map any of the 256 priorities specified in IP ToS to priority or best effort. The user can configure a different ToS on CTC at the card-level view under the Provisioning > Ether Ports tabs. Any ToS class higher than the class specified in CTC is mapped to the priority queue, which is the queue geared towards low latency. By default, the ToS is set to 255, which is the highest ToS value. This results in all traffic being treated with equal priority by default.

Table 17-3 shows which values are mapped to the priority queue for sample IP ToS settings. (ToS settings span the full 0 to 255 range, but only selected settings are shown.)


For a CoS-tagged frame, the CE-100T-8 can map the eight priorities specified in CoS to priority or best effort. The user can configure a different CoS on CTC at the card-level view under the Provisioning > Ether Ports tabs. Any CoS class higher than the class specified in CTC is mapped to the priority queue, which is the queue geared towards low latency. By default, the CoS is set to 7, which is the highest CoS value. This results in all traffic being treated with equal priority by default.

Table 17-2 shows which values are mapped to the priority queue for CoS settings.

Priority queuing has no effect when flow control is enabled (default) on the CE-100T-8. Under flow control a 6 kilobyte single-priority first in first out (FIFO) buffer fills, then a PAUSE frame is sent. This results in the packet ordering priority becoming the responsibility of the external device, which is buffering as a result of receiving the PAUSE flow-control frames.

The CE-100T-8 card features remote monitoring (RMON) that allows network operators to monitor the health of the network with a network management system (NMS). The CE-100T-8 uses the ONG RMON. The ONG RMON contains the statistics, history, alarms, and events MIB groups from the standard RMON MIB, as well as Simple Network Management Protocol (SNMP). A user can access RMON threshold provisioning through TL1 or CTC. For RMON threshold provisioning with CTC, refer to the Cisco ONS 15454 Procedure Guide and the Cisco ONS 15454 Troubleshooting Guide. For TL1 information, refer to the Cisco ONS SONET TL1 Command Guide.

The CE-100T-8 has a full range of Ethernet and POS statistics under Performance > Ether Ports or Performance > POS Ports. These are detailed in the "Performance Monitoring" chapter of the Cisco ONS 15454 Reference Manual.

The CE-100T-8 has eight POS ports, numbered one through eight, which are exposed to management with CTC or TL1. Each POS port is statically mapped to a matching Ethernet port. By clicking the card-level Provisioning tab > POS Ports tab, the user can configure the Administrative State, Framing Type, and Encapsulation Type. By clicking the card-level Performance tab > POS Ports tab, the user can view the statistics, utilization, and history for the POS ports.

Each POS port terminates an independent contiguous SONET concatenation (CCAT) or virtual SONET concatenation (VCAT). The SONET circuit is created for these ports through CTC or TL1 in the same manner as a SONET circuit for a non-Ethernet line card. Table 17-3 shows the circuit sizes available for the CE-100T-8 on the ONS 15310-CL and ONS 15310-MA.


A single circuit provides a maximum of 100 Mbps of throughput, even when an STS-3c circuit, which has a bandwidth equivalent of 155 Mbps, is provisioned. This is due to the hardware restriction of the Fast Ethernet port. A VCAT circuit is also restricted in this manner. Table 17-3 shows the minimum SONET circuit sizes required for 10 Mbps and 100 Mbps wire speed service.

A user can combine CCAT high order, VCAT high order, and VCAT low order circuits in any way as long as there is a maximum of eight circuits and the mapper chip bandwidth restrictions are observed. The following table details the maximum density service combinations.

The CE-100T-8 has two pools, each with a maximum capacity of three STSs. At the CTC card-level view under the Maintenance tab, the STS/VT Allocation tab displays how the provisioned circuits populate the two pools. This information can be useful in freeing up the bandwidth required for provisioning a circuit, if there is not enough existing capacity on any one pool for provisioning the desired circuit. The user can look at the distribution of the existing circuits among the two pools and decide which circuits to delete in order to free up space for the desired circuit. 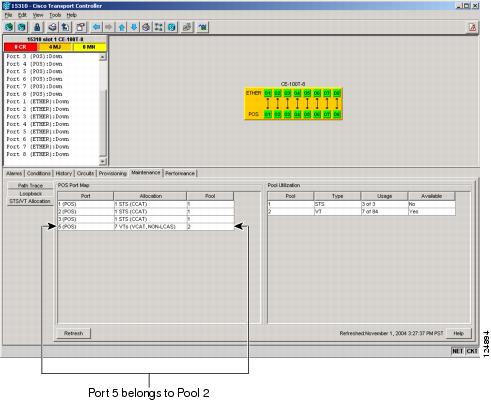 Looking at the POS Port Map table, the user can determine which circuits belong to which pools. The Pool and Port columns in Figure 17-4 show that the circuit on port 5 is drawn from Pool 2, and no other circuits are drawn from Pool 2. Deleting this one circuit will free up an STS-3c or STS-1-3v worth of bandwidth from a single pool.

The POS Port table has a row for each port with three columns (Figure 17-4). They show the port number, the circuit size and type, and the pool it is drawn from. The Pool Utilization table has two columns and shows the pool number, the type of circuits on that pool, how much of the pool's capacity is being used, and whether additional capacity is available.

The ML-100T-8 card and the CE-100T-8 card (both the version for the ONS 15310-CL and ONS 15310-MA and the version for the ONS 15454 SONET/SDH) have hardware-based support for the ITU-T G.7042 standard link capacity adjustment scheme (LCAS). This allows the user to dynamically resize a high order or low order VCAT circuit through CTC or TL1 without affecting other members of the VCG (errorless). ML-100T-8 LCAS support is high order only and is limited to a two member VCG.

To enable end-to-end connectivity in a VCAT circuit that traverses through a third-party network, you must create a server trail between the ports. For more details, refer to the "Create Circuits and VT Tunnels" chapter in the Cisco ONS 15310-CL and Cisco ONS 15310-MA Procedure Guide.

The CE-100T-8 card allows independent routing and protection preferences for each member of a VCAT circuit. The user can also control the amount of VCAT circuit capacity that is fully protected, unprotected or if the circuit is on a bidirectional line switched ring (BLSR), uses protection channel access (PCA). Alarms are supported on a per-member as well as per virtual concatenation group (VCG) basis.

The CE-100T-8 card supports terminal and facility loopbacks when in the Out of Service, Maintenance state (OOS, MT). It also reports SONET alarms and transmits and monitors the J1 Path Trace byte in the same manner as OC-N cards. Support for path termination functions includes: