This chapter describes how to configure resilient packet ring (RPR) for ML-Series cards.

When an ML-Series card is configured with RPR and made part of a shared packet ring (SPR), the ML-Series card assumes it is part of a ring. If a packet is not destined for devices attached to the specific ML-Series, the ML-Series card simply continues to forward this transit traffic along the SONET circuit, relying on the circular path of the ring architecture to guarantee that the packet will eventually arrive at the destination. This eliminates the need to queue and forward the packet flowing through the nondestination ML-Series card. From a Layer 2 or Layer 3 perspective, the entire RPR looks like one shared network segment.

RPR operates over either protected or unprotected SONET circuits. On unprotected SONET circuits, RPR provides SONET-like protection without the redundant SONET protection path. Eliminating the need for a redundant SONET path frees bandwidth for additional traffic. RPR also incorporates spatial reuse of bandwidth through a hash algorithm for east/west packet transmission. RPR utilizes the entire ring bandwidth and does not need to block ring segments like STP or RSTP.

The RPR protocol, using the transmitted packet's header information, allows the interfaces to quickly determine the operation that needs to be applied to the packet. An ML-Series card configured with RPR is part of the ring and has three basic packet-handling operations: bridge, pass-through, and strip. Figure 15-1 illustrates these operations. Bridging connects and passes packets between the Ethernet ports on the ML-Series and the packet-over-SONET (POS) circuit circling the ring. Pass-through lets the packets continue through the ML-Series card and along the ring, and stripping takes the packet off the ring and discards it. Because STP or RSTP is not in effect between nodes when RPR is configured, the transmitting RPR port strips its own packets after they return from circling the ring. A hash algorithm is used to determine the direction of the packet around the RPR. 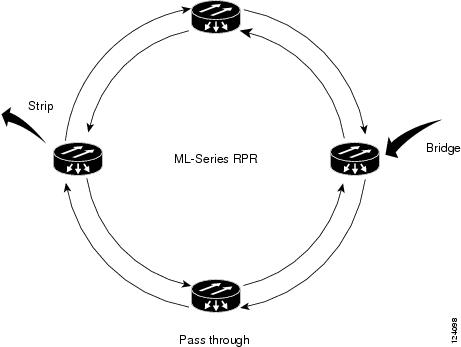 RPR initiates ring wraps in the event of a fiber cut, node failure, node restoration, new node insertion, or other traffic problems. This protection mechanism redirects traffic to the original destination by sending it in the opposite direction around the ring after a link state change or after receiving SONET path level alarms. Ring wrapping on the ML-Series card allows convergence times of less than 50 ms. RPR convergence times are comparable to SONET and much faster than STP or RSTP.

RPR wraps occur within 50 msec after the failure condition with the default spr wrap immediate configured. If spr wrap delay is configured, the wrap is delayed until the POS interface goes link-down. The link goes down after the time specified with the CLI pos trigger delay <msec>. If the circuits are VCAT then the Cico IOS CLI command pos vcat defect delayed also needs to be configured. The delay helps ensure that when RPR is configured with SONET bandwidth protection, this Layer 1 protection has a chance to take effect before the Layer 2 RPR protection. If the interface goes down without a SONET error, then the carrier delay also take effect. Figure 15-2 illustrates ring wrapping. 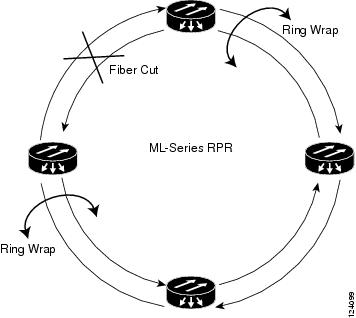 RPR also enhances VLAN support relative to STP and RSTP. In STP and RSTP, a new VLAN must configured on all POS interfaces in the ring. In RPR, the VLAN must only be added to the configuration of those interfaces that bridge or strip packets for that VLAN. The ML-Series card still has an  architectural maximum limit of 255 VLAN/bridge-group per ML-Series card. But because the ML-Series card only needs to maintain the MAC address of directly connected devices per card, this allows for a greater number of connected devices per RPR network.

A best practice is to configure SONET circuits in an east-to-west or west-to-east configuration, from Port 0 (east) to Port 1 (west) or Port 1 (east) to Port 0 (west), around the SONET ring. Do not configure Port 0 to Port 0 or Port 1 to Port 1. The east-to-west or west-to-east setup is required for the Cisco Transport Manager (CTM) network management software to recognize the ML-Series configuration as an SPR.

Do not use native VLANs for carrying traffic with RPRs.

Each of the ML-Series card's two POS ports must be assigned to the SPR interface.

To assign the POS interfaces on the ML-Series to the SPR, perform the following procedure, beginning in global configuration mode:

Figure 15-3 shows an example of an RPR Cisco IOS configuration. The associated code is provided in Examples 15-1, 15-2, and 15-3. The configuration assumes that ML-Series card POS ports are already linked by point-to-point SONET circuits configured through CTC. 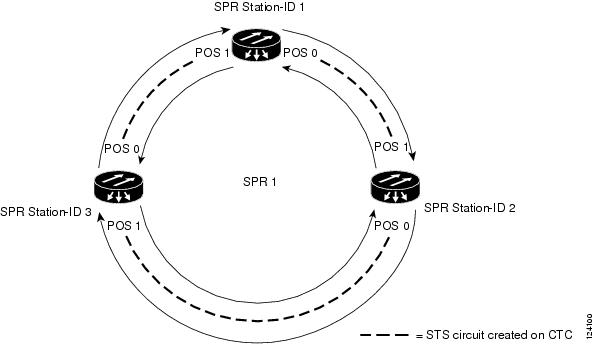 After RPR is configured, you can monitor its status using the show interface spr1 or show run interface spr command (Example 15-4).