Table 11-1 shows the SDH rings that can be created on each ONS 15454 SDH node using redundant TCC2 cards.

The ONS 15454 SDH can support five concurrent MS-SPRings in one of the following configurations:

Each MS-SPRing can have up to 32 ONS 15454 SDH nodes. Because the working and protect bandwidths must be equal, you can create only STM-4 (two-fiber only), STM-16, or STM-64 MS-SPRings. For information about MS-SPRing protection channels, see the "10.8  MS-SPRing Protection Channel Access Circuits" section on page 10-13.

For best performance, MS-SPRings should have one LAN connection for every ten nodes in the MS-SPRing.

In two-fiber MS-SPRings, each fiber is divided into working and protect bandwidths. For example, in an STM-16 MS-SPRing (Figure 11-1), VC4s 1 to 8 carry the working traffic, and VC4s 9 to 16 are reserved for protection. Working traffic (VC4s 1 to 8) travels in one direction on one fiber and in the opposite direction on the second fiber. The Cisco Transport Controller (CTC) circuit routing routines calculate the "shortest path" for circuits based on many factors, including user requirements, traffic patterns, and distance. For example, in Figure 11-1, circuits going from Node 0 to Node 1 typically travel on Fiber 1, unless that fiber is full, in which case circuits are routed on Fiber 2 through Node 3 and Node 2. Traffic from Node 0 to Node 2 (or Node 1 to Node 3), can be routed on either fiber, depending on circuit provisioning requirements and traffic loads. 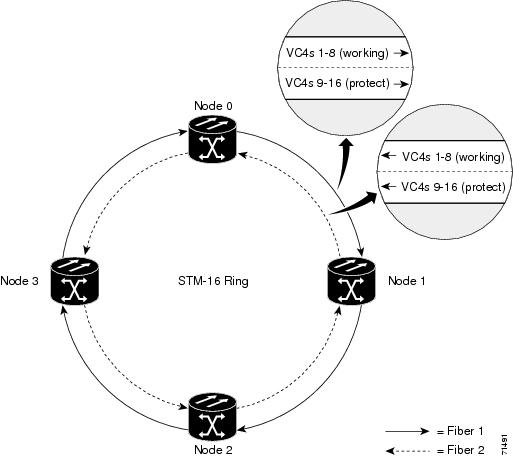 The SDH K1, K2, and K3 bytes carry the information that governs MS-SPRing protection switches. Each MS-SPRing node monitors the K bytes to determine when to switch the SDH signal to an alternate physical path. The K bytes communicate failure conditions and actions taken between nodes in the ring. 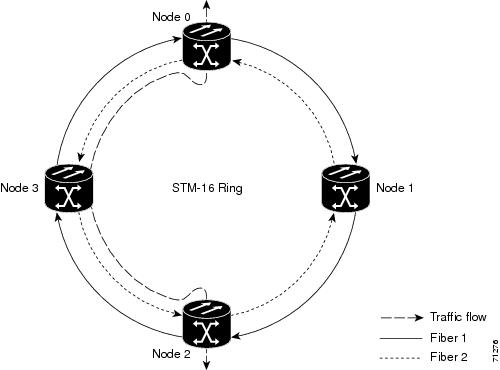 Figure 11-3 shows how traffic is rerouted after a line break between Node 0 and Node 3. 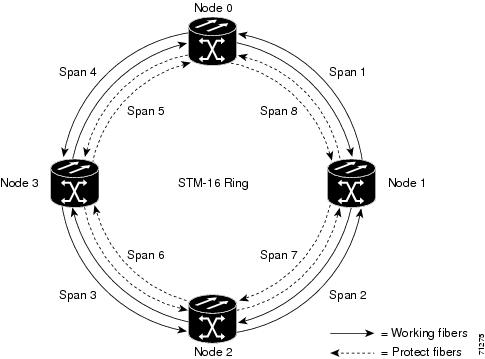 Span switching occurs when a working span fails (Figure 11-5). Traffic switches to the protect fibers between the nodes (Node 0 and Node 1 in the Figure 11-5 example) and then returns to the working fibers that did not fail. Multiple span switches can occur at the same time. 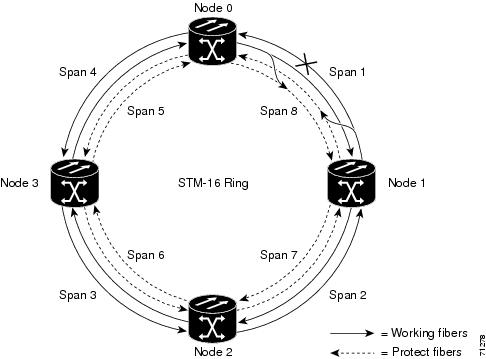 Ring switching occurs when a span switch cannot recover traffic (Figure 11-6), such as when both the working and protect fibers fail on the same span. In a ring switch, traffic is routed to the protect fibers throughout the full ring. 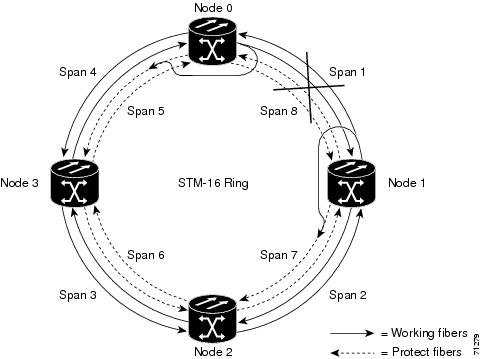 An MS-SPRing node can terminate traffic it receives from either side of the ring. Therefore, MS-SPRings are suited for distributed node-to-node traffic applications such as interoffice networks and access networks.

MS-SPRings share the ring bandwidth equally between working and protection traffic. Half of the payload bandwidth is reserved for protection in each direction, making the communication pipe half-full under normal operation.

MS-SPRings allow bandwidth to be reused around the ring and can carry more traffic than a network with traffic flowing through one central hub. MS-SPRings can also carry more traffic than an SNCP ring operating at the same STM-N rate. Table 11-2 shows the bidirectional bandwidth capacities of two-fiber MS-SPRings. The capacity is the STM-N rate divided by two, multiplied by the number of nodes in the ring and minus the number of pass-through VC4 circuits. 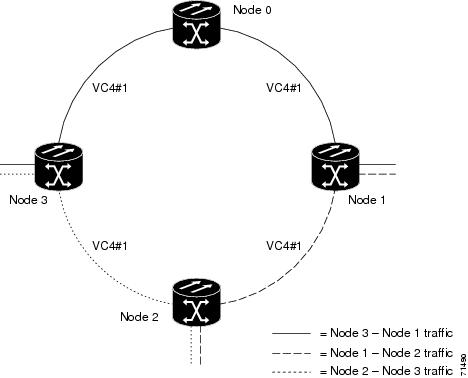 Figure 11-8 shows a sample two-fiber MS-SPRing implementation with five nodes. A regional long-distance network connects to other carriers at Node 0. Traffic is delivered to the service provider's major hubs.

Carrier 1 delivers six E-3s over two STM-1 spans to Node 0. Carrier 2 provides twelve E-3s directly. Node 0 receives the signals and delivers them around the ring to the appropriate node.

The ring also brings 14 E-1s back from each remote site to Node 0. Intermediate nodes serve these shorter regional connections.

The ONS 15454 SDH STM-1 card supports a total of four STM-1 ports so that two additional STM-1 spans can be added at little cost. 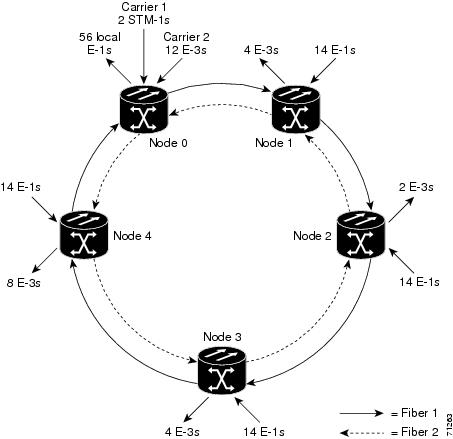 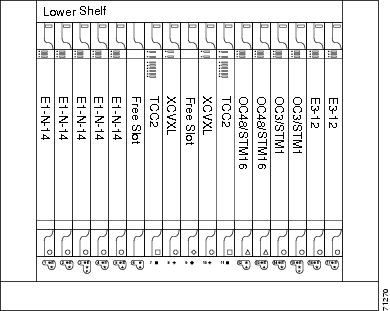 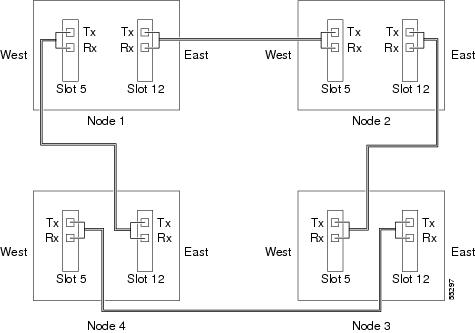 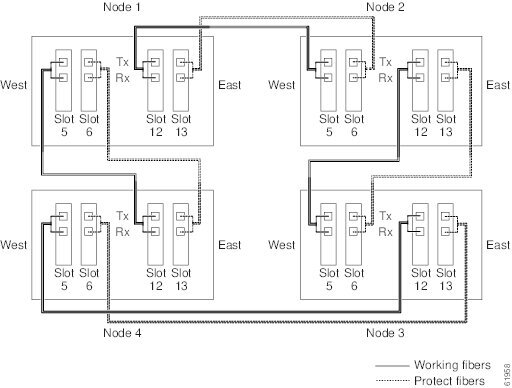 Subnetwork connection protection (SNCP) rings provide duplicate fiber paths in the network. Working traffic flows in one direction and protection traffic flows in the opposite direction. If a problem occurs in the working traffic path, the receiving node switches to the path coming from the opposite direction. With SNCP ring networks, switching occurs at the end of the path and is triggered by defects or alarms along the path.

The network can be divided into a number of interconnected subnetworks. Within each subnetwork, protection is provided at the path level and the automatic protection switching between two paths is provided at the subnetwork boundaries. The node at the end of the path and the intermediate nodes in the path select the best traffic signal. The virtual container is not terminated at the intermediate node; instead, it compares the quality of the signal on the two incoming ports and selects the better signal.

CTC automates ring configuration. SNCP ring network traffic is defined within the ONS 15454 SDH on a circuit-by-circuit basis. If an extended SNCP ring mesh network circuit is not defined within a 1+1 or MS-SPRing line protection scheme and path protection is available and specified, CTC uses an SNCP ring as the default protection mechanism. 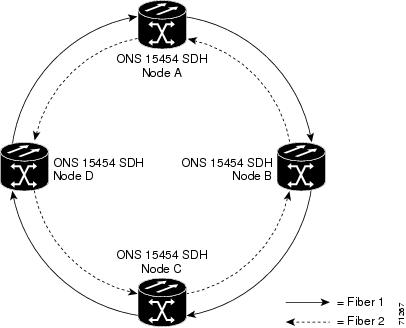 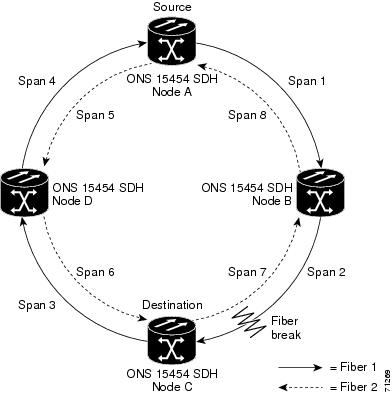 Because each traffic path is transported around the entire ring, SNCP rings are best suited for networks where traffic concentrates at one or two locations and is not widely distributed. SNCP ring capacity is equal to its bit rate. Services can originate and terminate on the same SNCP ring, or they can be passed to an adjacent access or interoffice ring for transport to the service-terminating node.

Figure 11-15 shows a common SNCP ring application. STM-1 path circuits provide remote switch connectivity to a host V5.x switch. In the example, each remote switch requires eight E-1s to return to the host switch. Figure 11-16 and Figure 11-17 show the shelf layout for each node in the example. 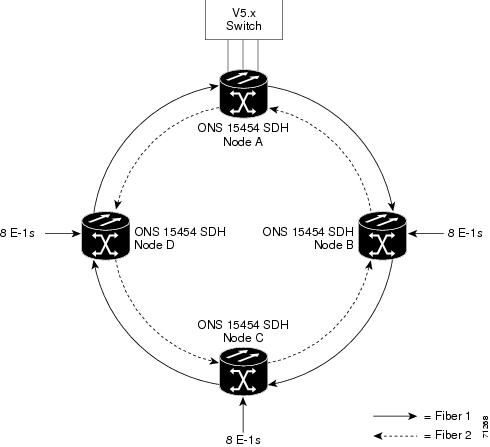 Node A has four E1-14 cards to provide 42 active E-1 ports. The other sites only require two E1-14 cards to carry the eight E-1s to and from the remote switch. You can use the other half of each ONS 15454 SDH shelf assembly to provide support for a second or third ring to other existing or planned remote sites.

In this sample STM-1 SNCP ring, Node A contains four E1-14 cards and two STM-1 cards. Six free slots are available, which you can provision with cards or leave empty.

Figure 11-16 shows the shelf setup for this sample configuration. 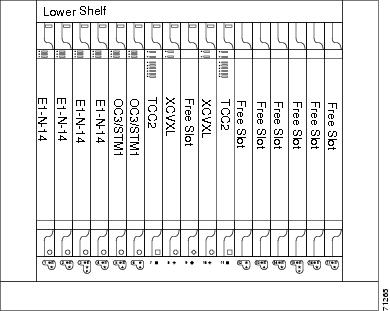 In Figure 11-15, Nodes B through D each contain two E1-14 cards and two STM-1 cards. Eight free slots are available that you can provision with other cards or leave empty. Figure 11-17 shows the shelf assembly setup for this sample configuration. 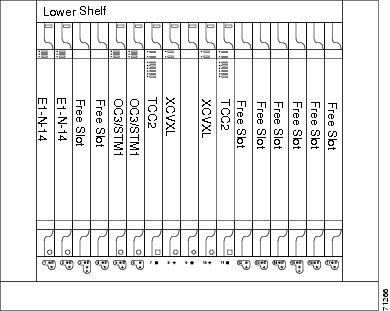 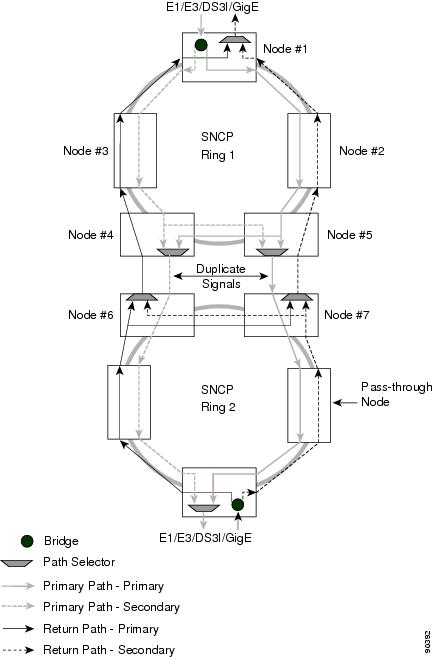 Figure 11-19 shows ONS 15454 SDHs in an integrated DRI topology. The same drop and continue traffic routing occurs at two nodes, rather than four. This is achieved by installing an additional STM-N trunk at the two interconnect nodes. 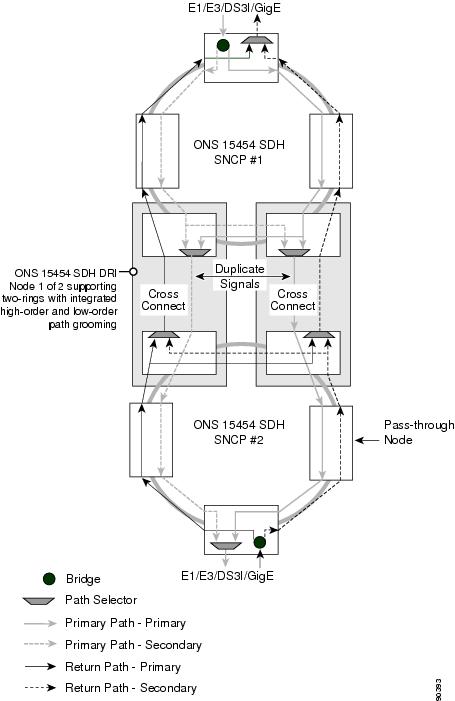 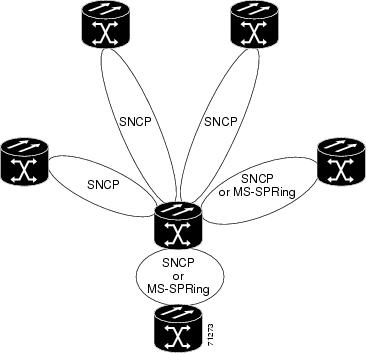 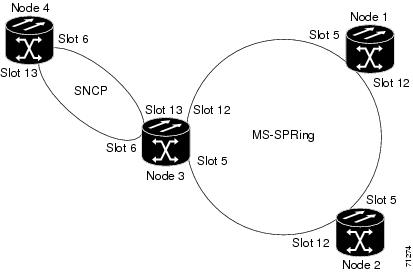 The ONS 15454 SDH can support five MS-SPRings on the same node. This allows you to deploy an ONS 15454 SDH in applications requiring SDH Digital Cross-connect Systems (DCSs) or multiple SDH add/drop multiplexers (ADMs).

Nodes in different MS-SPRings can have the same or different node IDs.

After subtending two MS-SPRings, you can route circuits from nodes in one ring to nodes in the second ring. For example, in Figure 11-22 you can route a circuit from Node 1 to Node 7. The circuit would normally travel from Node 1 to Node 4 to Node 7. If fiber breaks occur, for example between Nodes 1 and 4 and Nodes 4 and 7, traffic is rerouted around each ring: in this example, Nodes 2 and 3 in Ring 1 and Nodes 5 and 6 in Ring 2.

You can configure ONS 15454 SDHs as a line of add/drop multiplexers (ADMs) by configuring one set of STM-N cards as the working path and a second set as the protect path. Unlike rings, linear (point-to-point) ADMs require that the STM-N cards at each node be in 1+1 protection to ensure that a break to the working line is automatically routed to the protect line.

In an extended SNCP ring, circuits travel diverse paths through a network of single or multiple meshed rings. When you create circuits, you can provision CTC to automatically route circuits across the Extended SNCP ring, or you can manually route them. You can also choose levels of circuit protection. For example, if you choose full protection, CTC creates an alternate route for the circuit in addition to the main route. The second route follows a unique path through the network between the source and destination and sets up a second set of cross-connections.

For example, in Figure 11-24, a circuit is created from Node 3 to Node 9. CTC determines that the shortest route between the two nodes passes through Node 8 and Node 7, shown by the dotted line, and automatically creates cross-connections at Nodes, 3, 8, 7, and 9 to provide the primary circuit path. 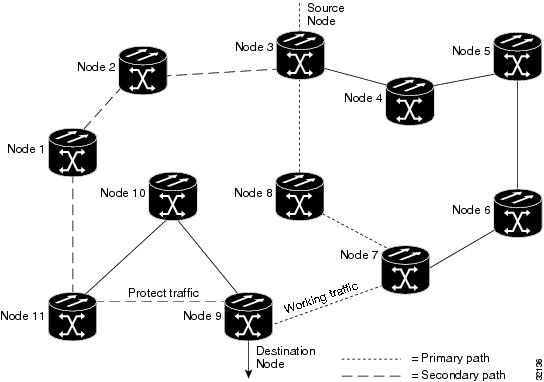 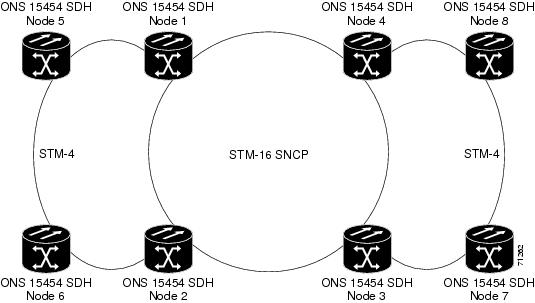 You can link multiple ONS 15454 SDHs using their STM-N cards (that is, create a fiber-optic bus) to accommodate more access traffic than a single ONS 15454 SDH can support. Refer to the Cisco ONS 15454 SDH Procedure Guide for more information. You can link nodes with STM-4 or STM-16 fiber spans as you would link any other two network nodes. The nodes can be grouped in one facility to aggregate more local traffic. Each shelf assembly is recognized as a separate node in the ONS 15454 SDH software interface and traffic is mapped using CTC cross-connect options.

A span is the optical fiber connection between two ONS 15454 SDH nodes. In a span (optical speed) upgrade, the transmission rate of a span is upgraded from a lower to a higher STM-N signal but all other span configuration attributes remain unchanged. With multiple nodes, a span upgrade is a coordinated series of upgrades on all nodes in the ring or protection group. You can perform in-service span upgrades for the following ONS 15454 SDH cards:

You can also perform in-service card upgrades for the following ONS15454 cards:

When performing span upgrades on a large number of nodes, we recommend that you upgrade all spans in a ring consecutively and in the same maintenance window. Until all spans are upgraded, mismatched card types are present.

We recommend using the Span Upgrade Wizard to perform span upgrades. Although you can also use the manual span upgrade procedures, the manual procedures are mainly provided as error recovery for the wizard. The Span Upgrade Wizard and the Manual Span Upgrade procedures require at least two technicians (one at each end of the span) who can communicate with each other during the upgrade. Upgrading a span is non-service affecting and causes no more than three switches, each of which is less than 50 ms in duration.

Span upgrades do not upgrade SDH topologies, for example, a 1+1 group to a two-fiber MS-SPRing. Refer to the Cisco ONS 15454 SDH Procedure Guide for topology upgrade procedures.

The Span Upgrade Wizard automates all steps in the manual span upgrade procedure (MS-SPRing, SNCP ring, and 1+1). The wizard can upgrade both lines on one side of a four-fiber MS-SPRing or both lines of a 1+1 group; the wizard upgrades SNCP rings and two-fiber MS-SPRings one line at a time. The Span Upgrade Wizard requires that spans have DCCs enabled.

Manual Span Upgrades are mainly provided as error recovery for the Span Upgrade Wizard, but they can be used to perform span upgrades. Downgrading can be performed to back out of a span upgrade. The procedure for downgrading is the same as upgrading except that you choose a lower-rate card type. You cannot downgrade if circuits exist on the VCs that will be removed (the higher VCs).

Upgrade on an SNCP ring

Upgrade on a 1+1 protection group

Upgrade on an unprotected span