Each demand has a specified amount of traffic. There are several methods for putting this traffic into the demands, including the Demand Deduction tool, which calculates a realistic amount of per-demand traffic based on measured traffic.

This chapter describes demands, including how they are created and how their traffic can be estimated.

Each demand is comprised of unique properties (keys) that define it, other properties, and traffic. The following list summarizes these, though for a complete list of properties, refer to the available columns in the Demands table.

Selected demand paths are blue. An “A” labels the source, and a “Z” labels the destination.

If multiple interfaces are attached to a node and if a demand is sourced to or destined for that node, the traffic splits across one or more of those interfaces, depending on other properties, such as IGP metrics or BGP policies (on a peering circuit). You can, however, specify just one of those interfaces. Figure 1 shows an example of this difference between using nodes and interfaces. In this example, the interface destination is one of three interfaces going into the er1.atl node.

Demand meshes are a time-efficient way of creating numerous demands for all or part of the network. By default, WAE Design creates a source-destination mesh among nodes, interfaces, external ASes, and external endpoints. There are also advanced options, such as the ability to use a different set of destinations to create the demand meshes.

Alternatively, you can import an existing <DemandMesh> table that contains estimated traffic. WAE Design uses these estimations to calculate a full mesh of demands.

Each demand can have a latency bound, which is a policy that sets the maximum permissible latency on a demand under normal operation. These can then be used to guide the route selection of the traffic engineering tools. The Simulation Analysis tool can use these values to determine if latency bounds are violated when worse-case failures occur.

The Demands table has several Latency columns. Key ones are as follows:

To view demand paths in the network plot, select them in the Demands table. Their path highlight is blue. An “A” labels the source, and a “Z” labels the destination. If sites are nested, these “A” and “Z” labels appear in all relevant child sites.

When you select demands in the Demands table, their associated L1 circuit paths are highlighted in the network plot.

Demands are most commonly used to show how traffic reroutes around failures. A dashed line shows the rerouted demand.

Demand routes can be complex because they can go through multiple sites that could hide the details of the path. For example, the network plot might not show the individual nodes traversed by the demand, as in Figure 1. The demand plot offers an easier way to view end-to-end demands, letting you view the hops that the demands take without having to individually select sites to view them. For example, Figure 2 shows the demand plot view of the same selected demand as in Figure 1.

Plan files contain traffic measurements on the discovered network. Traffic can be measured on interfaces, interface queues, and RSVP LSPs, as well as on general traffic flows, such as from LDP LSPs. You can use Demand Deduction to estimate demand traffic based on any of these measurements.

The accuracy and usefulness of the results depend on many factors, including how much measured traffic is available, and of what type. For example, interface measurements are most often available, but LSP measurements might provide more information. The results also depend on the accuracy of the demand mesh and the routing model.

Typically, you only have interface traffic measurements. In this case, the individual demands estimated by Demand Deduction are not necessarily accurate. However, aggregates of demands can be highly accurate. For example, predicting the overall utilization after a failure, a topology change, or a metric change, can be very accurate even if the underlying demands individually are not reliable.

Note that you can also use Demand Deduction to set Traffic Balance (%) values for external endpoint members that are set to a Deduce Traffic type. See Advanced Routing with External Endpoints.

This example demonstrates results when using the Demand Deduction tool on a simple network. Figure 1 shows the routes of two demands in a network. These demands split between the two parallel core circuits due to an ECMP, and they have a common routing until the last hop. The Traffic column in the Demands table shows 0 because these demands do not yet contain traffic. Figure 2 shows the Measured Traffic view and the five interfaces associated with the two demands, three of which have measured traffic.

Upon running Demand Deduction with its default options, the Simulated Traffic view appears. Other than the measured interface traffic, there is no other information about the demand traffic. So Demand Deduction first splits the difference between the measured 470 Mbps of traffic (Edge1 to Core1) and the measured traffic of 460 Mbps (Core1 to Core2) to get an estimated total demand traffic of 465 Mbps. In the absence of any other information, it divides this 465 equally to give 232.5 Mbps of traffic to each demand (Figure 3). In the Interfaces table, the Traff Sim column now has values and the network plot shows simulated traffic percentages on all five interfaces associated with the demands.

In this same example, if the Core2 to Edge2 interface had 50 Mbps traffic, the results would have been different. Because this interface is used only by the one demand, the measured 50 Mbps of traffic would be used as an estimate only for that one demand. Using the same logic as before, the demands should total to 465 Mbps, so the other demand is set to the difference, which is 415 Mbps.

Differences in Measured and Simulated Traffic

Demand Deduction relies on accurate topologies, demand meshes, and traffic measurements. These can affect the results of the traffic simulated in the demands and cause simulated traffic to differ from the measured traffic, thus affecting the accuracy of WAE Design simulations. You can see how close these values are by showing the Abs Meas Diff and Meas Diff/Cap (%) columns in the Interfaces column.

Meas Diff/Cap (%)—The absolute measured difference expressed as a percentage of capacity.

If these columns show large values, one of the following situations likely exists:

Demand Deduction estimates demands that predict interface utilizations under incremental changes to the topology, for example failures, metric changes, or design changes, such as adding a new express route. If interface measurements alone are available, you might choose to fine-tune the Demand Deduction calculations to get better results, such as for site-to-site traffic. To enhance the accuracy of Demand Deduction results, consider the following suggestions:

All selections and entries are optional except for identifying the source and destination.

You can set demand latency bounds to fixed values or to the following relative values (Table 1). All values are in ms (milliseconds).

The options available can significantly affect the calculations. For information on improving accuracy of results, see Minimizing Differences Between Measured and Simulated Traffic. For information on setting up external endpoint members to be included in Demand Deduction calculations, see Advanced Routing with External Endpoints. 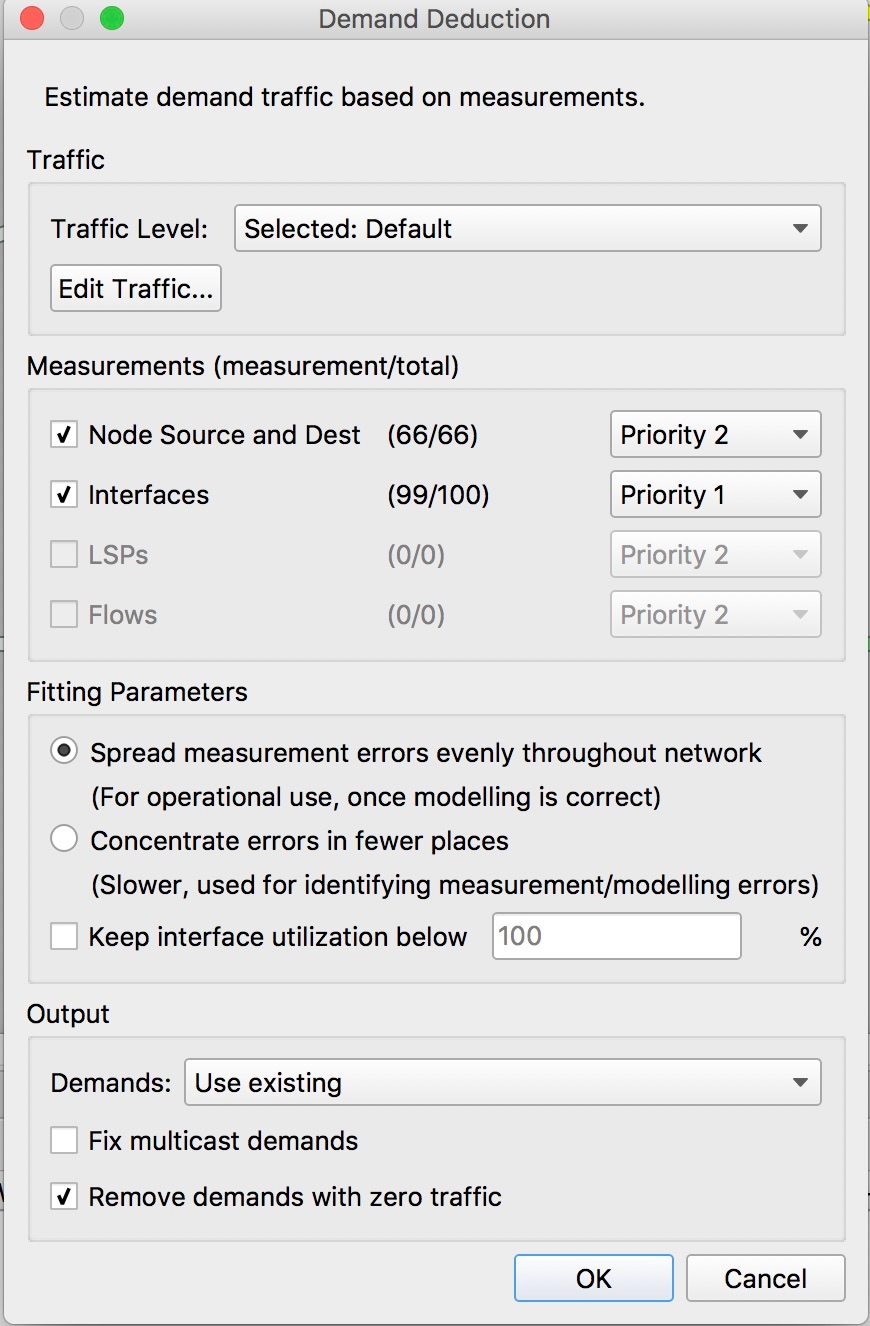 When a live network cannot be measured, you can estimate the demand traffic by editing the demand mesh. This is a simple way to create traffic in a mesh of demands by specifying the total source and destination traffic per node using one of the following algorithms. For traffic mesh options used in more sophisticated growth estimates, see Traffic Forecasting.

After you manually enter total traffic data in the dialog box, you can export it to a file for later use.

You have numerous options for modifying demand traffic, all from the same dialog box. The changes that you make apply to the selected demands for the current traffic level.

You can modify demand traffic to either fixed values or to the following relative values.