The following table describes changes to this guide.

The WAN Automation Engine (WAE) platform is an open, programmable framework that interconnects software modules, communicates with the network, and provides REST and Thrift APIs to interface with external applications.

WAE Planning software provides the tools to create and maintain a model of the current network through the continual monitoring and analysis of the network and the traffic demands being placed on it. This network model contains all relevant information about a network at a given time, including topology, configuration, traffic, and routing information. You can use this information as a basis for analyzing the impact on the network due to changes in traffic demands, paths, node and link failures, network optimizations, and other possible changes to the network. With WAE Automation software, you can then deploy the results of the analyses and optimizations into the network for improved network performance or, for example, for temporary changes during network maintenance.WAE Automation uses open APIs and standardized protocols to provide interaction between applications and the network.

The WAE APIs enable you to develop applications that communicate using any language that supports REST or Thrift APIs. REST APIs are HTTP-based and are often used in the development of web-based services. Thrift is an open-source interface definition language that is used to define and create services for numerous languages.

The WAE platform has numerous use cases, including the following.

This guide is for single-system environments only and does not contain configurations for all modules. For further configurations, such as configuring distributed environments where there is more than one instance of the WAE platform, contact your support representative.

The platform workflow (Figure 1-1) consists of ongoing data collection, network analysis and optimizations, and deployment of the resulting requirements onto the network infrastructure.

An application could use the output from the Calendaring Module to run as input to the simulations run by the Optimization and Prediction Module.

Once satisfied with the optimizations and changes, you can choose to send this new model to the Network Modeler Module.

Note that the Collector Module uses a Collector server and a WAE Network Interface (NI) server, while the remaining modules use the WAE Core server. 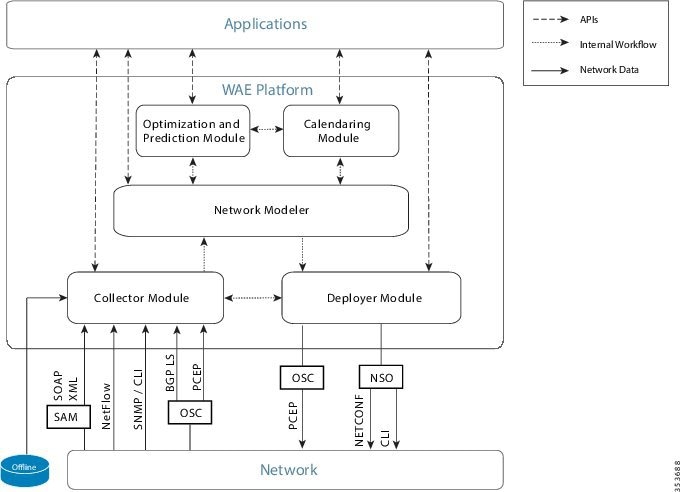 This guide describes the following configurations.