Health reports enable you to monitor and remedy network health by finding network objects that exhibit problematic behavior over time. For example, you can report on specific nodes that surpass 90% CPU utilization.

Each health report uniquely identifies ways in which an object might be considered unhealthy or in the case of LAGs, which LAGs are imbalanced. For instance, if you ran an interface health report on utilization over 80%, the resulting report would tell you the percentage of time each interface had over 80% utilization within the given time range, as well as the number of times the operating status changed. Another example is determining the number of times (Count) that a specific event occurs, such as LSP path changes.

Once the report is generated, you can then graph the properties over the report time range. These graphs allow you to drill down to the specific times at which the event occurred. These graphs could indicate when a specific threshold was violated or they could narrow the threshold violations to a single event.

An interface health report gives the percentage of time that incoming and outgoing traffic surpassed a user-defined threshold. Additionally, it identifies the number of times the operational status changed.

Example: Figure 9-1 shows an example health report output for an interface that was above an 80% utilization threshold 70.28% of the time, during which time there were 3 operating status changes. The graph visually shows that one of the peaks in utilization occurred on October 6. Moving the cursor over that point gives the exact date and utilization values.

A link aggregation group (LAG) is a group of physical interfaces that are bundled into a single logical interface. When traffic is not spread evenly across the members, congestion and dropped packets can occur even though the LAG itself is not congested.

A LAG Imbalance report enables you to determine which LAGs are imbalanced and at risk of dropping packets or incurring congestion. The basis for determining whether a LAG is included in the report is whether any of its members surpass a user-specified Util Out threshold. This helps you target potentially problematic LAGs, avoiding those that do not have sufficient traffic to give accurate results.

The LAG Imbalance report is based on two key parameters.

The LAG Imbalance/Risk graph shows the imbalance and risk compared to the high- and medium-risk thresholds, as well as whether and when the LAG passes these thresholds. The difference between risk and imbalance measurements is that risk calculations consider only positive differences, whereas imbalance calculations consider both negative and positive differences. For instance, Figure 9-2 shows that a LAG’s utilization was significantly imbalanced for several days, while it was only minimally at risk. 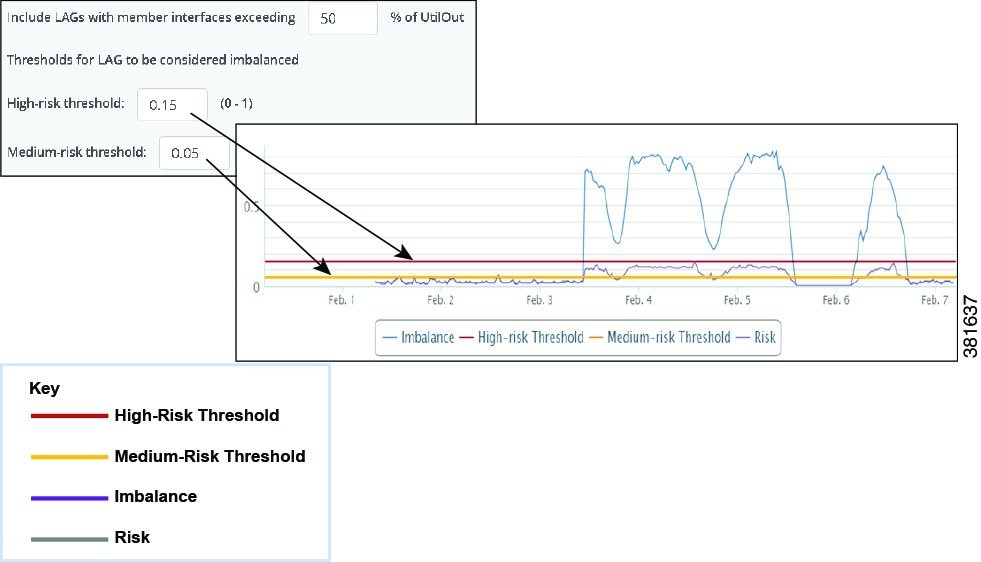 The Util Out graph shows the Util Out percentage of all of the LAG’s members over the report period (Figure 9-3). If you see that a LAG is imbalanced or at risk, this graph is helpful in determining which of the members is causing these effects.

In addition to these graphs, the report output includes the following utilization, imbalance, and risk values.

This example compares two scenarios to demonstrate how you could interpret the data.

While LAG A is imbalanced, it does not appear to be at high risk. Traffic coming into this LAG will likely not pose a problem since the data suggests that even if one member fails, the other nine members can handle the traffic.

LAG B is imbalanced and likely at high risk. One particular member is receiving much more traffic than the other members. If this happens when traffic is coming into LAG B and if that traffic is assigned to the member with 90% utilization, there might not be sufficient bandwidth left to handle the traffic, resulting in dropped packets.

High- and Medium-risk threshold—Specify the thresholds used to determine whether a LAG is imbalanced or at risk. The value must be between 0 and 1.

An LSP health report identifies the percentage of time that the LSP traffic surpasses the user-specified threshold of setup bandwidth (set in the Setup BW Threshold tab). Additionally, it gives the following information.

A node health report identifies the percentage of time that the CPU and memory surpass a threshold that you set in the CPU Threshold and Memory Threshold tabs, respectively.