Ad hoc reports offer a flexible means of customizing reports to meet specific requirements, making them useful for a variety of use cases. For example, you can average the sum of traffic exiting grouped nodes, or determine how many times an LSP left its shortest TE path.

The basic ad hoc report creates a table of data in which each table value is the result of the time aggregation operation applied to the property over the entire report time range. Each row is an object. Each column is defined by a combination of properties and time aggregations (both of which are selected in the Data Columns fields).

Time aggregation operations vary, depending on the selected object as follows.

Example: Figure 11-1 shows the output for aggregating P95 Traffic In for interfaces connected to the EU_LON_BB1 node. Interface Bundle-Ether2 (row 1) has 14,249.25 Mb of P95 traffic for the last three months. 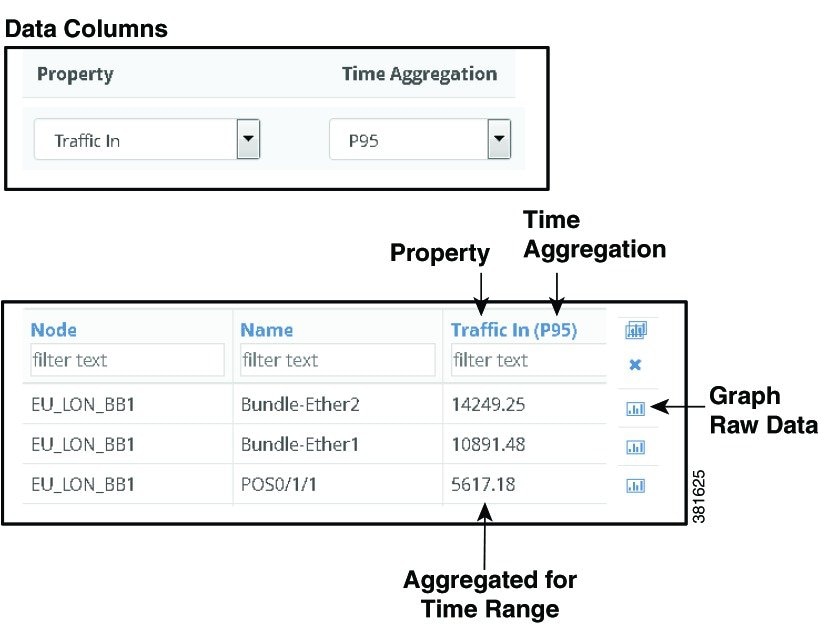 Each combination of property and time aggregation value can be aggregated by time intervals ranging from hours to years. This broadens the possibilities for how you view the data. For example, you can report on the average number of dropped packets for the last six months (Time Range), and aggregate those averages on a weekly basis (Time Interval). Sorting the Dropped Packets Out column would then show the most problematic interfaces. Another example would be to create yearly reports on a quarterly basis.

Example: Figure 11-2 extends the report created in Figure 11-1. Here, each property and time aggregation is further aggregated into a one-week time interval. The difference is that the graph now shows the P95 aggregation applied to one-week increments across three months. By looking at these increments you can see that while the raw data fluctuations, the traffic is very steady on a per-week basis. 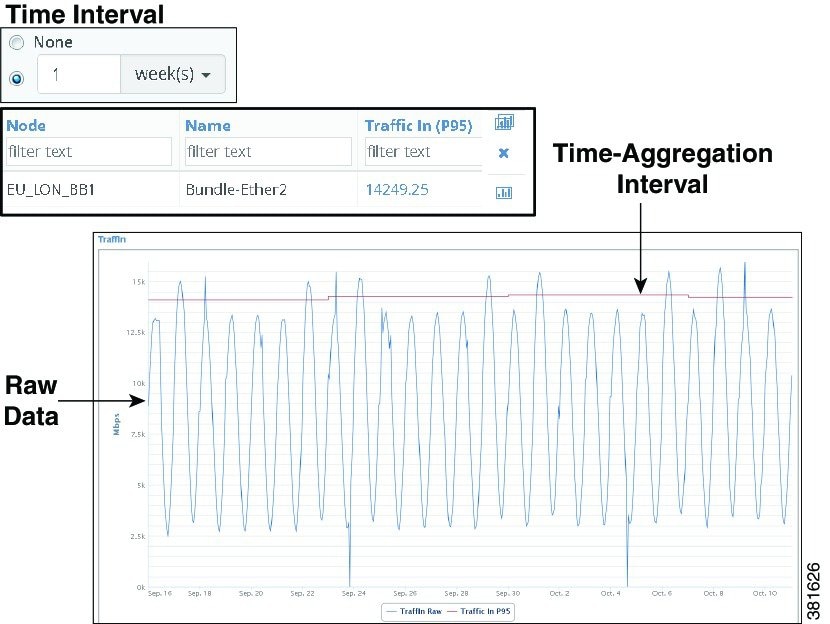 Ad hoc reports enable you to determine and graph the percentage of growth for any high-frequency property over a specified time range. The resulting data is based on time aggregations of the raw traffic data (for example, average traffic per day). The report tables provide additional information, such as the number of aggregated objects on which the trending is computed. They also list the percentage at which the traffic is growing or shrinking.

One potential use for the percentage growth time aggregation would be to identify how fast your traffic is growing so you can plan for increasing capacity in the future, or whether it is declining, which could be an indication of a diminishing market or service.

Example: Figure 11-3 shows the output of an ad hoc report that was grouped by node and then by capacity. The time range was 6 months, and the growth computation was based on the daily maximum traffic. Sorting on Traffic In (Percent Growth) shows that the EU_LON_BB3 node with 10,000 Mbps capacity had the largest percentage growth in the last 6 months at 223.08 percent.

Add or delete properties, as needed.

– To delete a property, click the Trash Can icon.

Time aggregation operations vary, depending on the selected object as follows.

WAE Live first calculates the trend at which the property value is moving (its direction and frequency), and then uses this trend to determine the percentage of growth. Set the following parameters to determine how this percentage is calculated.

Example: If you select Traffic as an LSP property in the Data Columns section and P95 as the Time Aggregation operation, and if you select 1 week as the Time Interval, the resulting graph shows P95 traffic aggregated on a weekly basis (one data point per week, which is the P95 value of Traffic over that week).

Figure 11-4 shows an example ad hoc report generated to determine the aggregated weekly maximum outgoing traffic per node over the past year. It also includes a calculation for the percentage of growth The totals in the resulting report are for three months, and the graphs show the traffic aggregated in weekly increments. Clicking the number in the Count column shows the names of the interfaces.

The table is filtered by EU nodes and sorted on the Traffic Out (Maximum) column to show which European nodes have the highest outbound traffic using the given aggregation. For the European nodes with the highest traffic, the table also shows that these nodes have little fluctuation in their growth, but that all but one has decreasing traffic. The node showing the greatest percentage of loss is EU_MAD_BB2 at -23.25 percent loss over the last three months. Yet, you can also determine that while it is showing a percentage growth loss over time, the node has traffic spikes. 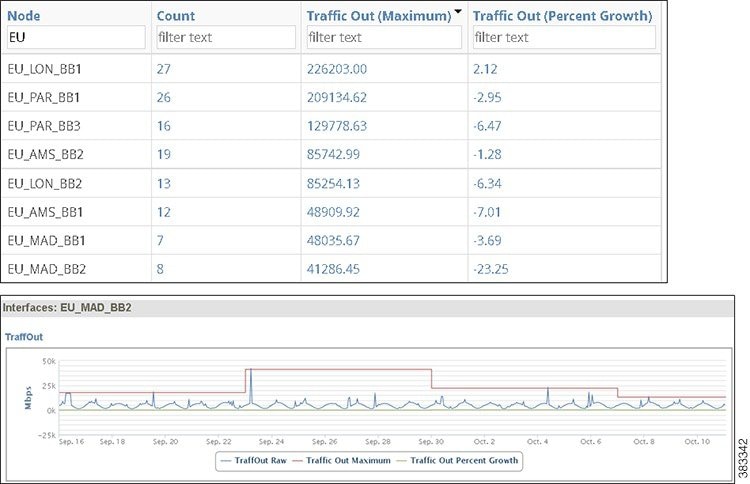