WAE Design enables you to generate reports that compare IP/MPLS topology and configuration information, demand routings, LSP routings, or traffic between two plan files. You can also generate a complete plan comparison. Following are a few examples of how these reports could be used.

Upon comparing plan files, a report of the results automatically opens. You can access this report later by selecting the Window->Reports menu.

For information on creating table interactions with reports, see the WAE Design Integration and Development Guide. 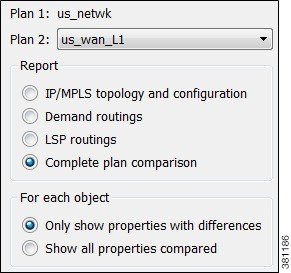 You can run four types of plan comparison reports, as follows.

The Plan Comparison report displays three other types of columns. Table 24-1 , Table 24-2 , and Table 24-3 list the properties reported upon and their associated column type.

Differences are based on the current state of the open plan files. For instance, if a circuit is currently failed, the demand routings change to route around the failure.

For easy reference, the following tables list columns in the order of type first: Key, Info, Diff, and Summ Diff. Properties within each column type are alphabetical.

Open the two plan files you want to compare.

In either of these two plan files, select the Tools->Reports->Compare Plans menu. A Compare Plans dialog box appears.

Select the plan file to which you are comparing the open plan.

Select the type of comparisons you want to generate.

Traffic Comparison reports compare traffic values within a single plan or between two plan files. You can compare traffic on one object at a time (nodes, interfaces, circuits, demands, LSPs, multicast flows, and flows). Each object has a different set of comparisons from which to choose. For example, interface traffic and capacity can be compared, and LSP traffic and setup bandwidth can be compared. Another example would be to compare the simulated interface traffic in a plan file before a failure to the measured interface traffic of a plan file in which a failure has occurred. Such a comparison would enable you to determine which interfaces show the greatest differences.

The opening section, Summary, gives a high-level summary of what is being compared. Additionally, a section of the difference on the selected object and traffic columns is generated and named accordingly. If comparing traffic from the open plan file to another, open the other plan file. In each plan file, select the travel levels and select either the service class or queue traffic you want to compare.

Select the object type on which you want to compare traffic: interfaces, nodes, LSPs, demands, multicast flows, or flows.

Select the traffic column in the current plan that you want to compare (Plan 1).

Select the traffic column being compared for Plan 2.

Upon generating a report, it automatically opens in a window. From there you can select the various sections of the report from the left navigation pane.

To view a report after having closed it, select the Window->Reports menu. All reports generated on that plan file appear and are selectable from one report window.

If you want to save these reports for later use, you must save the plan file. However, running the report again overwrites the report. To preserve the information, you can export the data by report section. Right-click any of the sections from the left navigation pane, and select Export Tables.