Traffic reports enable you to trend interface traffic, LSP traffic, and demands over a specified time range. These trends are based on time aggregations of the raw traffic data (for example, P95 traffic per week). The resulting report tables provide additional information, such as the number of aggregated objects on which the trending is computed. They also list the percentage at which the traffic is growing or shrinking.

Additional options are available, as follows.

Carry these historical trends into the future to determine at what date the traffic would be projected to surpass a given threshold.

Determine the state of traffic at a specific date.

Grouping objects is useful for aggregating traffic that can then be imported into WAE Design for use in creating growth plans. For more information, see the WAE Design Integration and Development Guide.

Example: This basic LSP traffic report shows the LSP traffic aggregated on a daily P95 basis. The trend values, growth, and trend line are all fairly even, and the traffic is spiking upwards with some regularity. 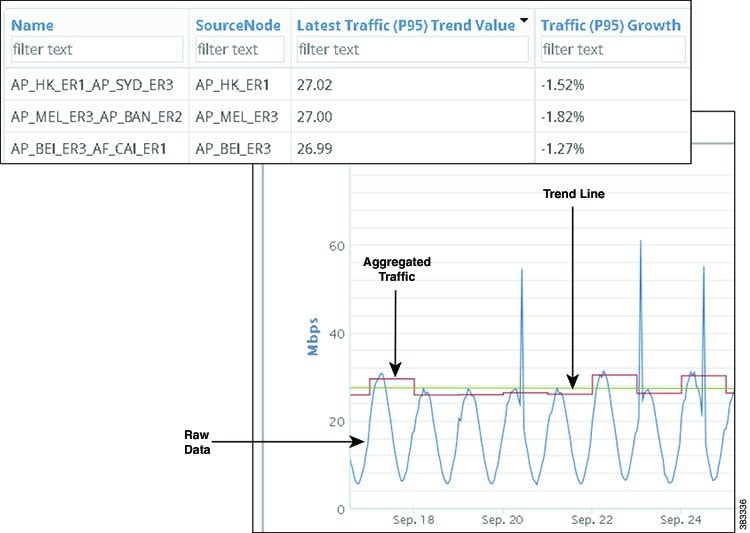 One projection option is to project which objects will exceed a specified utilization in a specified future time range. Once the report is generated, you can graph the historical and projected trend on a per-object or per-group basis over any period of time. These graphs allow you to visualize the trends and underlying data. They can show a pattern of when thresholds are surpassed, and they can show threshold violations narrowed to a single event. For instance, if you set 50% for 2 years using a maximum monthly trend, the resulting projected threshold tells you when aggregated monthly maximum traffic is expected to exceed 50% of the interface capacity over the next two years.

Example: If you set 50% for 2 years using a maximum monthly trend, the resulting projected threshold tells you when aggregated monthly maximum traffic is expected to exceed 50% of the interface capacity over the next two years.

Example: Figure 8-1 shows an example traffic report generated to determine which interfaces will exceed 80% of their outbound traffic utilization in the next 5 weeks based on last month’s traffic trend. The trend is based on aggregating daily P95 Traffic Out. Sorting on Traffic Out (P95) Growth shows that the TenGigE0/0/0 interface on the AP_TOK_ER8 node has the highest percentage of traffic utilization growth.

One projection option is to project the amount of traffic for a specified date. This is useful for planning purposes, such as determining when you might need to configure more LSPs or add more capacity.

Example: Figure 8-2 shows an example report output when projecting traffic by date to January 1, 2014. The report shows that the projected traffic on January 1 will be 16,096.92 Mbps for the same interface shown in Figure 8-1.

If one plan file exists per day, and if the month has 28 days, then each interface in the datastore has 28 Traffic Out values for that month. If you run a traffic report on an interface and specify that you want to trend the weekly P95 of Traffic Out over this month, each week raw data would be aggregated into a single P95 value. So the first weekly value is an aggregation of seven P95 values. The remaining weekly values are an aggregation of the seven P95 values for their respective weeks. The result is a time-series aggregation with four data points on which the report is trended. These trends are viewable as graphs. For information on how raw data is collected, see the Objects, Properties, and Data chapter.

WAE Live first calculates the trend at which the property value is moving (its direction and frequency), and then uses this trend to determine the projected traffic. Set the following parameters to determine how this percentage is calculated.

Example: If you select interfaces as the object and group by nodes, the resulting report includes a row for each node. The data in that row is for all interfaces connected to that node. To see the names of interfaces on that node, click the number in the Count column.

Find <Object> Over ___ % or Mbps—Project the traffic trend into the future based on the computed trend. WAE Live determines and graphs when the trend will exceed this threshold. See the Project Traffic to Cross Thresholds section.

To Date—Project the traffic amount on a specified date. See the Projecting Traffic by Date section.