This chapter describes what is required to install Prime Optical, the components that come with Prime Optical, and how to calculate the total number of Oracle Named User Plus licenses required for your Prime Optical server and client installations. It contains the following topics:

Although Cisco makes every attempt to ensure the availability of third-party hardware and software platforms specified for Prime Optical, Cisco reserves the right to change or modify system requirements due to third-party vendor product availability or changes that are beyond Cisco’s control.

The Prime Optical server runs on any of the platforms listed in Table 2-1 .

The following tables show recommended hardware specifications for installing the Prime Optical server, and the resulting maximum number of Network Elements (NEs) the server manages for each configuration.

If the Prime Optical server and Oracle database are installed on separate workstations, both workstations must meet the hardware requirements shown in the following tables. Table 2-3 lists the minimum processor requirements.

It is possible to use and configure disk arrays for database storage with any type of Redundant Array of Inexpensive Disks (RAID) layout. You can do so only if the disk throughput is equal to or higher than the throughput calculated for internal disks.

Cisco tests the simulated network configurations listed in Table 2-4. Your setup and performance might vary depending on the size of your network and the usage pattern of management tasks.

The following list describes the server configuration parameters and the effect of changes in each parameter on the maximum number of NEs the server can manage:

For large and high-end networks, if you do not follow the preceding disk striping recommendations, the I/O might create a critical bottleneck and cause an unexpected Prime Optical shutdown.

The ctm_backup directory is a repository used by the oracle user to back up the following categories of information:

The oracle user must have read/write permissions to avoid a database backup failure. The database could block if ARCHIVELOG files are not moved to the /ctm_backup directory.

The final /ctm_backup size is also related to the ARCHIVELOG files.

Prime Optical can run on a virtual machine (VM) on VMware vSphere version 5.5 or 6.0. VM RAM, disk and partitioning requirements must comply with the same requirements for a nonvirtualized setup based on system size.

Note VM performance can be affected if there are multiple VMs running on the same host. Consult your system administrator on the VMware configuration and requirements needed for your Prime Optical installation. Depending on the load, it may require a dedicated server or a virtualized one. See the VMware vSphere documentation for performance guidelines.

When installing Prime Optical on a virtual machine, do the following:

As a general guideline, we suggest you configure two vCPUs for every 500 nodes. This is based on a UCS C210 M2 machine, with a dual-socket, multicore 2.93GHz processor in a medium network Prime Optical setup during Cisco internal validation.

Confirm that the /etc/hosts file exists inside the guest OS of the VM and that the hostname (with and without a domain) is associated to the proper IP address and not to the loopback IP 127.0.0.0.

Example of a correct entry in the /etc/hosts file:

Example of an incorrect entry in the /etc/hosts file:

The file can be wrong if the VM OS was installed without network connectivity.

Figure 2-1 illustrates the classification of communication ports and protocols used in Prime Optical. 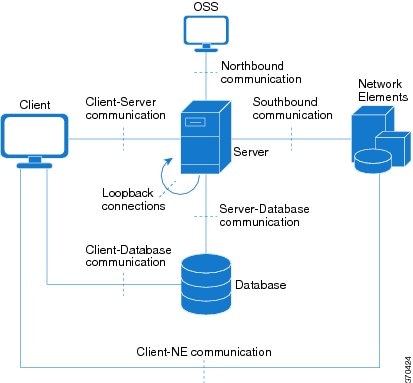 See Table 2-10 for a description of each type of communication port and protocol.

The Prime Optical client can launch Cisco Transport Controller (CTC) and Cisco Edge Craft (CEC) as external applications. The ports and protocols used by these application are detailed in their end-user documentation.

Figure 2-3 shows the port and protocol communication between the OSS CORBA Client and Prime Optical server.

Table 2-13 lists the ports and protocols used for communication between the Prime Optical server workstation and the OSS CORBA client workstation.

Table 2-14 lists the ports and protocols used for communication between the Prime Optical server and database.

The Prime Optical server establishes the internal connections listed in the following table. Although operating system commands (for example, netstat) show services listening on these ports, they do not need to be opened on a firewall because there is no incoming connection on these ports from other hosts.

The following table lists the ports and protocols used for loopback connections.

The following tables list the ports that the Prime Optical server uses to communicate with NEs (Figure 2-5).

The ports and protocols listed in Table 2-17 are used in addition to the ones listed in the previous table.

Table 2-21 lists the TCP ports to use in a sockets network proxy protocol (SOCKS) server configuration. This information is helpful when setting up a firewall routing table.

To launch the Prime Optical client, you must have a Linux or Windows PC. Memory, CPU, and disk requirements are reported in Table 2-22 .

The delta RAM and delta CPU must be counted for each additional launched client.

Java Runtime Engine (JRE) 1.7.0_45 or 10.7.0_51 must be installed on the client machine. If the client does not start, check that the JNLP files (Java Web Start) are associated with the correct javaws executable in the browser.

Client launch and operation are supported by the following remote application software:

The hardware requirements for the remote application depend on the number of clients that the system must export, calculated with the following formula:

The following figure shows the environment for a remote Citrix Presentation Server or Windows Server 2003 Terminal Server. In this example, the GUI application server and the presentation server reside on the same workstation. 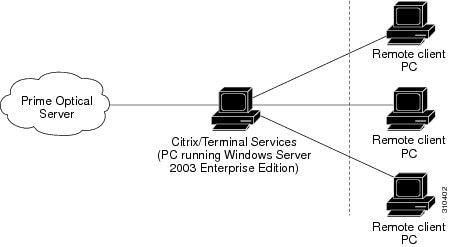 In this example, the hardware requirements for 10 clients are:

Note For the base RAM and base CPU requirements, refer to the documentation for:

This section explains how to calculate the total number of Oracle Named User Plus licenses required for your Prime Optical server and client installations. This section describes with examples the Oracle Enterprise Edition database edition.

See the Oracle website for detailed information about Oracle licensing definitions and requirements.

Oracle’s technology products, including the Oracle database required for use with Prime Optical, are licensed using one of two possible metrics: Processor and Named User Plus. Which metric to use normally depends on which will result in a lower price for the database. If for some reason the number of database users cannot be counted, the Processor metric must be used. However, in a Prime Optical environment, database users normally can be counted.

Oracle Enterprise Edition requires a minimum of 25 Named User Plus licenses per processor or the total number of actual users, whichever number is higher.

The following figure shows an example Prime Optical environment to illustrate identifying the human and automated database users that must be counted. 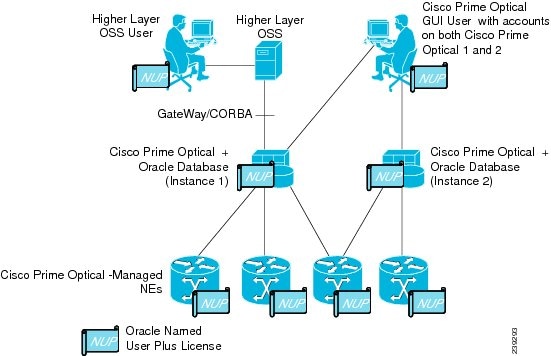 *Because of the self-monitor feature of Prime Optical, a Prime Optical server itself is considered an automated user of the database and is therefore counted.

This example explains how to count the named users, but the number of named users required is the larger of either 1) the actual count or 2) the required minimum.

If the processors are UltraSPARC IV and IV+ (dual core), the calculation for processor licensing is:

As a result of adding the OSS and related users, the total number of named users increases from 901 to 916.