The most basic ACS deployment consists of two servers; see Figure 1. One is the primary server that provides all of the configuration, authentication, and policy requirements for the network. 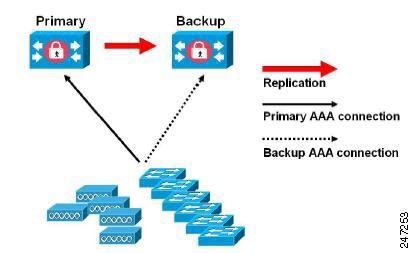 As the number of users and AAA clients increases in an organization, Cisco recommends changing the deployment ACS from the basic design and using split ACS deployment design; see Figure 2.

With two ACS systems now processing authentication requests and collecting accounting data from AAA clients, Cisco recommends using one of the systems as a log collector. Figure 2 shows the secondary ACS server as the log collector.

Another advantage of this design is that it also allows for growth as shown in Figure 3.

As the local network grows, you need to add more ACS servers to the system. In this scenario, you should consider promoting the primary server to perform configuration services and using the secondary servers for AAA functions. When the amount of log traffic increases, you should use one of the secondary servers as a centralized dedicated log collector server. ACS 5.8.1 supports one additional ACS instance in a deployment. The ACS 5.8.1 medium deployment supports 14 ACS instances. You can designate this additional ACS instance as a dedicated instance that can be promoted to a primary instance when the actual primary instance goes down. In a large ACS deployment, as shown in Figure 4, centralized logging is highly recommended. ACS 5.8.1 supports one additional ACS instance in a deployment. The ACS 5.8.1 large deployment supports 22 ACS instances. You can designate this additional ACS instance as a dedicated instance that can be promoted to a primary instance when the actual primary instance goes down. Cisco recommends a dedicated logging server (Monitoring and Report server) because of the potentially high syslog traffic that a busy network can generate. Because ACS generates syslog messages for outbound log traffic, any RFC-3164-compliant syslog server will work to collect outbound logging traffic.

This type of server enables you to use the reports and alerts features that are available in ACS for all ACS servers. This requires special licensing, which is discussed in the User Guide for Cisco Secure Access Control System 5.8.1. See Installing the ACS Server, for more information on installing the ACS server.

Note: ACS 5.8.1 does not support large deployments with more than 22 ACS instances.

To optimize AAA performance, each of these remote campuses should have its own AAA infrastructure. See Figure 5. The centralized management model should still be used to maintain a consistent, synchronized AAA policy. 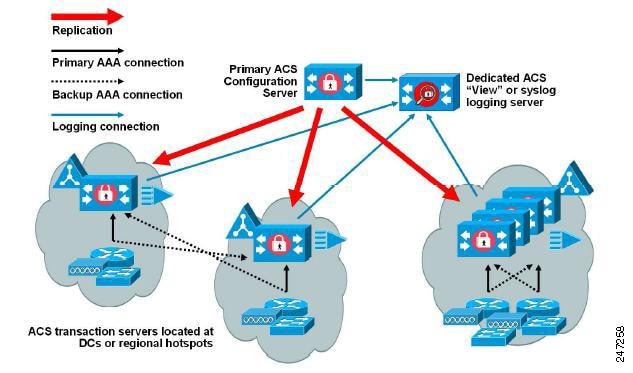 Check whether there is a central or external database (Microsoft Active Directory [AD] or Lightweight Directory Access Protocol [LDAP]) in use. For the purposes of optimization, each remote site should have a synchronized instance of the external database available for ACS to access.

The location of the AAA clients is also a major consideration. You should place your ACS servers as close as possible to the AAA clients to reduce the effects of network latency and the possibility of loss of access caused by WAN failure.

ACS has console access for some functions, such as backup. Consider using a terminal at each site. This allows for secure console access outside of network access to each server.

If small, remote sites are in close proximity and have reliable WAN connectivity to other sites, you may consider using an ACS server in a nearby site as a backup server for the local site for redundant configuration.

DNS should be properly configured on all ACS nodes to ensure access to the external databases.

This section briefly describes the roles of various ACS servers and how to configure them. For more information on assigning a role to a server and configuring it, see the User Guide for Cisco Secure Access Control System 5.8.1.

License—Install a unique base license for each of the ACS secondary servers in the deployment.