AAA clients and RADIUS proxy servers are defined and organized under the Network Resources drawer.

The following components are configured under Network Resources:

A single device can be a member of multiple groups—Network Device Group hierarchies.

Device group is not a container for AAA server definitions.

When you plan to migrate the network device to ACS 5.7, we recommend that you plan the device grouping before importing or configuring the devices. This will allow the assignment of groups to devices while they are being created in ACS 5.7.

ACS 3.x and 4.x has a flat device grouping model where a single device can belong to only one device group. This model causes a proliferation of groups when you are trying to group devices in multiple ways. Grouping locations hierarchically is very common.

For example, group by continent, region and country. The following example shows groups in ACS 3.x and 4.x:

Devices are often grouped by type. Extending the above example to incorporate type grouping would result in the following groups:

The number of groups increase when other parameters, such as device types, vendors, and so on are added.

You can assign any device to a node in each of the hierarchies. Figure 4 shows a Cisco switch device that is located in Botswana. 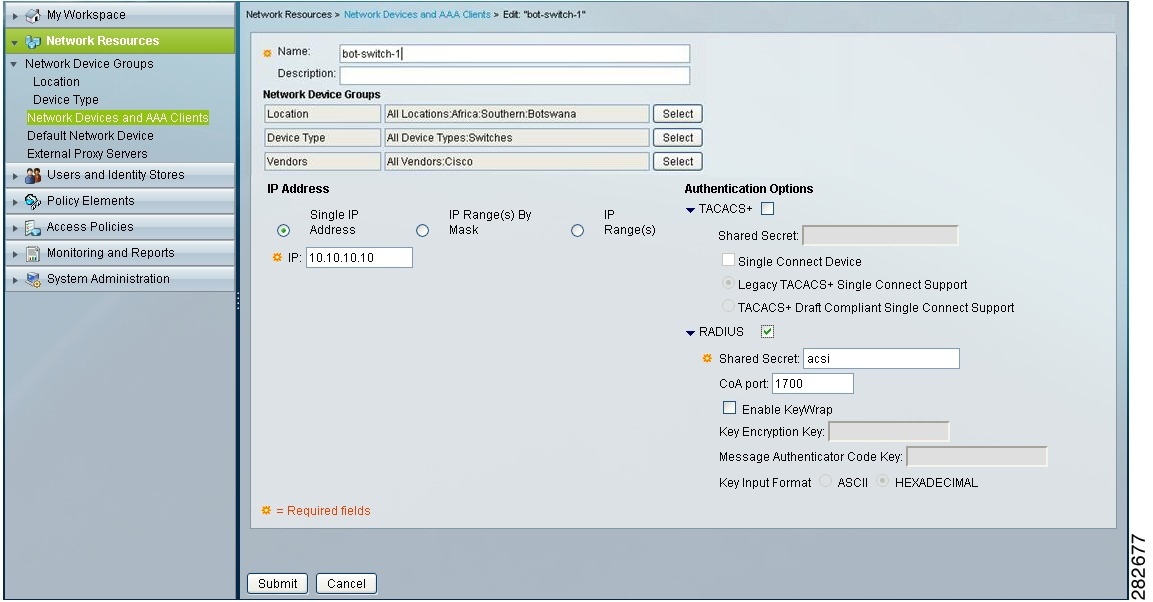 The following table shows an example of a rule that includes a condition that applies to Cisco firewalls in Namibia:

Plan your device grouping approach to make use of the more natural hierarchical grouping in ACS 5.7.

ACS 5.7 does not support per device group shared secrets that are available in ACS 3.x and 4.x. ACS 5.7 requires a shared secret to be defined for each device definition.

Single device definition for a AAA client supporting both TACACS+ and RADIUS—Separate definitions are no longer needed.

A default device definition for both TACACS+ and RADIUS. 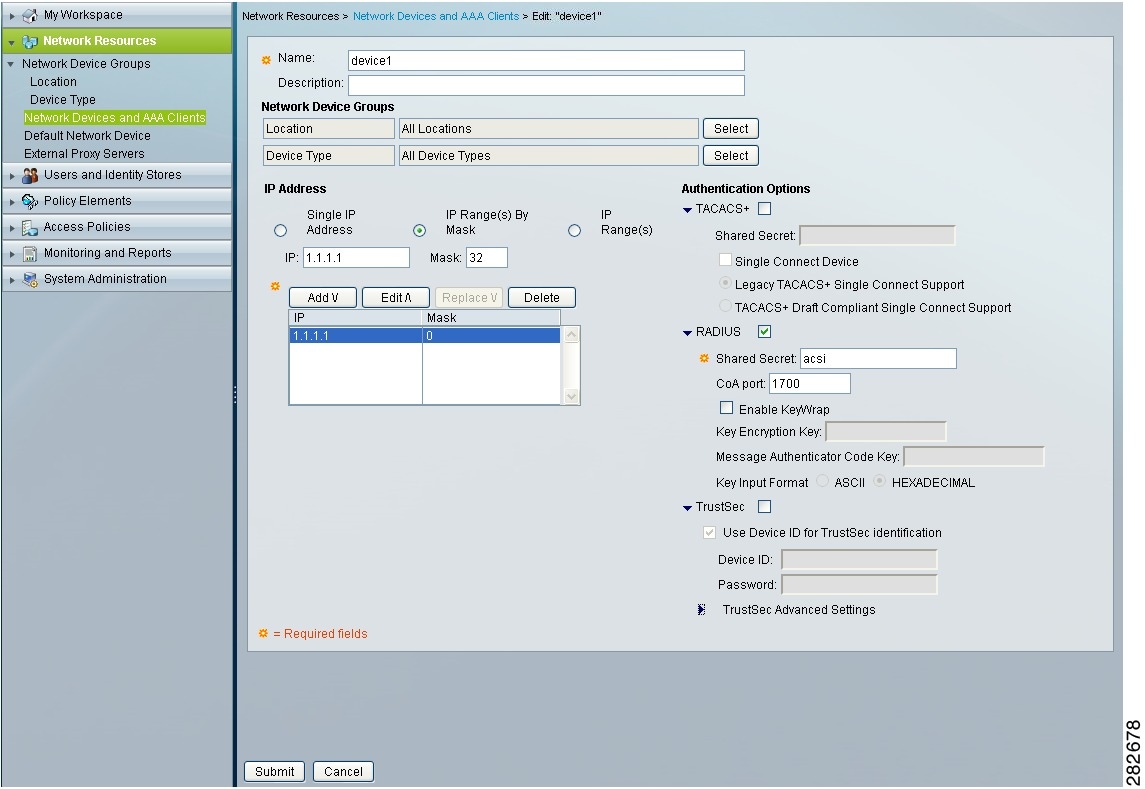 Figure 5 shows a device definition representing any client from subnets 10.10.20.0 and 10.10.30.0. These clients can send TACACS+ or RADIUS requests as both are enabled in the device configuration. 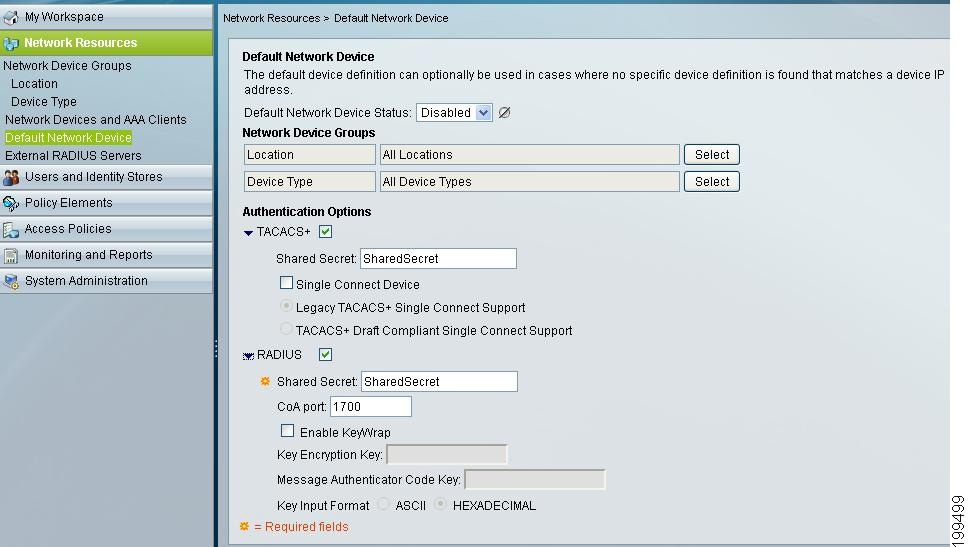 The default network device replaces the default TACACS+ device, 0.0.0.0, in ACS 3.x and 4.x. It can also act as a default device for RADIUS requests.

Consolidate double device definitions for TACACS+ and RADIUS in ACS 3.x and 4.x to a single device in ACS 5.7.

The default network device is a useful tool to enable faster migration to ACS 5.7. It allows ACS 5.7 to start receiving AAA requests while more specific device definitions are being created. 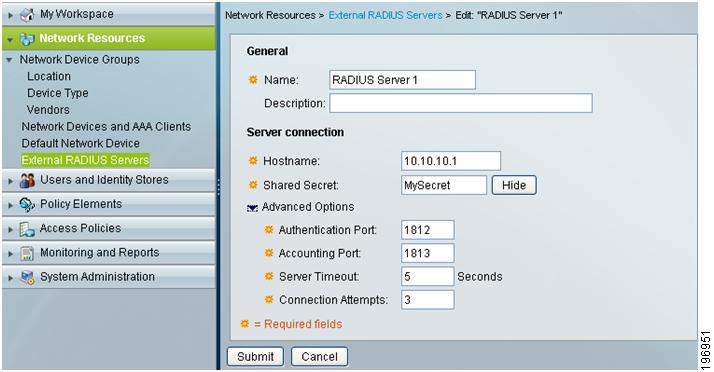 In ACS 5.7, there is no proxy distribution table to direct authentication requests to other AAA servers.

The following components are configured under Users and Identity Stores:

The ACS 5.7 identity group does not contain access policy permissions, similar to the ACS 3.x and 4.x user group.

Users need not be associated to an ACS group.

External groups need not be mapped to an ACS group. 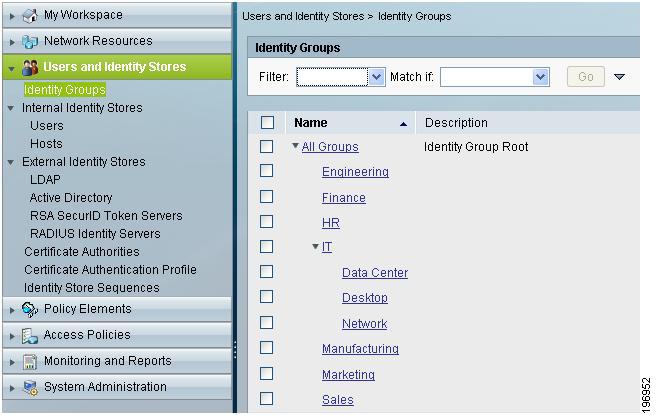 Access services contain rules made up of conditions that govern the policy that will be applied to a user. The user’s group membership is one of many attributes that can be used to compose these conditions. As policy is not applied through a group, ACS 5.7 does not require the group association.

In ACS 3.x and 4.x, when external identity stores such as Active Directory or LDAP directories are used for user authentication, and when the users’ directory group membership is relevant to their network access, a group mapping is required to map users’ external group membership to an ACS group. This is to apply the appropriate network access policy.

In ACS 5.7, external group memberships are attributes that can be used directly when you create the network access policy. Hence, you do not have to use group mapping.

Take advantage of the hierarchical nature of identity groups.

ACS 3.x and 4.x authorizations that are part of the user group are configured in the Policy Elements and Access Services drawers.

Instead of creating combination groups that represent users who belong to multiple groups, consider specifying these different groups by extending the internal identity store schema.

Figure 9 shows an example of a user Fred in the IT group, who is also classified by location and whether he can access switches, firewalls, and routers. 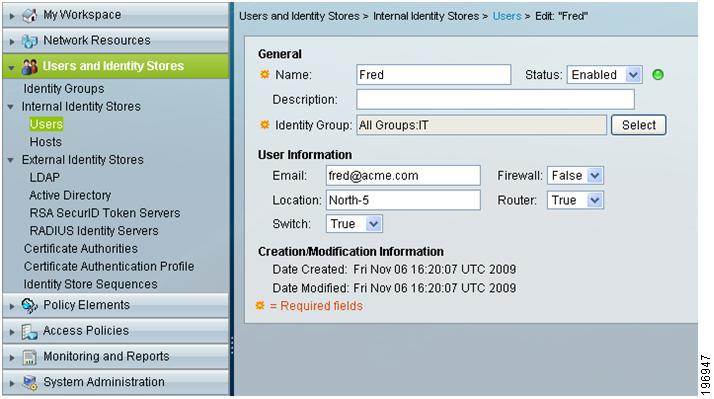 In addition to a user store, ACS 5.7 has a host store for host MAC addresses.

User schema can be customized to add extra user fields.

Custom user fields can store user-specific values that can be leveraged in access policies.

These fields can also become attributes that can be used in access policy. For example, it is possible to use the user's location as a condition, or an IP address value as a RADIUS return value.

ACS 5.7 provides a separate hosts store to maintain a MAC address database for agentless host scenarios (MAC authentication bypass). Similar to the user store, custom fields can be added to host records for use in access policy.

Use identity store sequences in combination with access service identity policy to implement the ACS 3.x/4x ability to select the password authentication method from the user record.

ACS 5.7 joins Active Directory (AD) directly and does not rely on a domain-joined Windows Server. ACS Remote Agent is not required.

ODBC databases are not supported in ACS 5.7, but other identity stores are supported, including LDAP directories and one-time password servers.

ACS 5.7 adds the ability for AD and LDAP user attributes to be used, in addition to user group membership, in access policy.

Identity store lists, provided by the unknown user policy in ACS 3.x and 4.x, are configured using identity store sequences in ACS 5.7. There is no concept of a dynamic user in ACS 5.7.

The External Identity Store configuration is similar to the External User Databases in ACS 3.x and 4.x. In ACS 5.7, external identity stores are configured and ACS communicates with them for authentication and authorization.

For Active Directory, ACS 5.7 joins an AD domain, rather than leveraging the underlying Windows operating system, similar to ACS 3.x and 4.x. ACS 5.7 relies on trust relationships between its domain and other domains to perform cross-domain authentication, as in ACS 3.x and 4.x.

You must enter the username and password credentials in the ACS 5.7 configuration for ACS to join and communicate with the AD domain. The credentials must have sufficient permissions to create a computer object. If a user’s AD group membership and attribute information are required for access policy, they must first be selected in the AD configuration.

Root CA certificates must be imported.

Trusted certificate authorities are defined under the certificate configuration options in Users and Identity Stores. Here, the authentication characteristics of different certificate profiles are also specified.

The certificate field that should be used as the principal username.

Whether a binary comparison of the certificate should be performed.

PEM- or DER-formatted X.509 certificates can be imported to create a list of trusted CAs.

ACS 5.7 does not check whether the certificate owner exists in a directory, but you can check the existence of a user attribute in an access service authorization policy.

For example, for one-time password users, where a user must be authenticated against a one-time password server, but additional authorization information such as their group memberships, are only available in a directory.

Use identity store sequences to replace the functionality provided by the unknown user policy in ACS 3.x and 4.x.

The primary components of access policy are identity and authorization policies. Both these policies are represented in separate rule tables in the ACS 5.7 access service. Each rule in a rule table is composed of conditions and results.

In the Policy Elements configuration area, you can create conditions and customize them. Authorization results are created in this area.

Network conditions that were formerly known as Network Access Restrictions (NARs) are defined in this configuration area.

The attributes available to create access service rule conditions include:

You can define the following additional conditions under session conditions:

Date and Time condition allows you to define date and time ranges.

Access policy conditions configured in the ACS 3.x and 4.x user, user group, or shared profile components, should be configured under session conditions.

The various types of network authorizations include:

Access policy authorizations that were formerly configured in the ACS 3.x and 4.x user, user group, or shared profile components, should be configured under Authorizations and Permissions.

Modify the identity policy to use another identity store, such as one-time passwords, if the default setting of internal users is not appropriate. 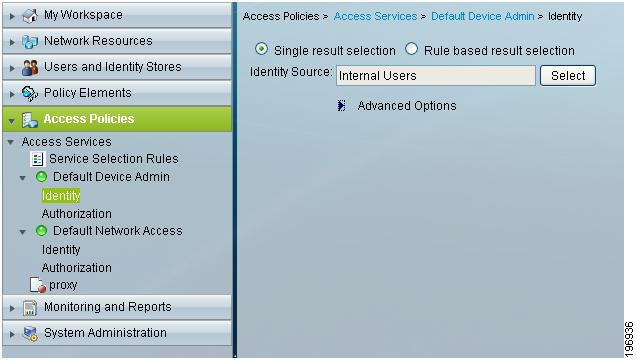 Utilize the new user and network device groupings to create authorization policy, as shown in Figure 11.

Convert the server specific configuration in ACS 3.x and 4.x, to server-based policy in ACS 5. Figure 16 shows how to use the system condition, and ACS host name to direct requests to different LDAP directories.

The key changes in ACS 5.7 are that ACS 5.7 provides the following configuration areas for system administration tasks:

The key changes in ACS 5.7 are that ACS administrators can be assigned up to ten predefined roles that govern an administrator's permissions.

Ability to assign ACS server roles to the primary or secondary servers.

Ability to assign an ACS server as a log collector for ACS View.

ACS 5.7 provides a migration tool to help migrate some parts of ACS 4.2 configuration.

A web services interface to build a password-change application for ACS internal users.

The configuration area contains links to download the ACS 5.7 Migration Utility and web services files to build a change-password application.