This document describes the Multiprotocol Label Switching (MPLS) enhancements to the existing Interfaces MIB (RFC 2233) to support an MPLS layer. This layer provides counters and statistics specifically for MPLS.

Configuration Examples for the MPLS Enhancements to Interfaces MIB

MPLS must be enabled on the LSRs

Write capability using the SNMP SET command is not supported for the MPLS layer in this release.

Some counters, including discard and multicast, increment on the underlying physical layer; therefore, they equal 0 because they never reach the MPLS layer.

The following MIB objects are affected:

After the counter increases to more than 232, the counters are different; the 64-bit value is computed by the following formula:

X is the number of times the 32-bit counter has rolled.

Y is the residual value of the counter after the roll occurred. The Y value equals the 32-bit value.

The inconsistent values can occur if traffic is constantly flowing over an interface and a MIB walk is performed. The 32-bit value is correct at that moment. The 64-bit value lags slightly, because of the polling computations needed to generate it. Once traffic stops flowing over the interface, and a polling period has passed, the two counters are identical and correct.

The lag time depends on the following factors:

The size of the Interfaces MIB. A large MIB takes a long time to walk and might affect the values found at that instant.

The number of computations needed to generate the 64-bit value. The number of MPLS-enabled interfaces increases the number of 64-bit counter values that need to be computed.

To configure the MPLS Enhancements to Interfaces MIB, you need to understand the following concepts:

The Interfaces MIB (IF MIB) provides an SNMP-based method for managing interfaces. Each entry in the IF MIB establishes indexing, statistics, and stacking relationships among underlying physical interfaces, subinterfaces, and Layer 2 protocols that exist within Cisco IOS software.

The enhancements add an MPLS layer to the IF MIB as a Layer 2 protocol to provide statistics for traffic encapsulated as MPLS on an interface. In this structure, MPLS-specific data such as MPLS-encapsulated traffic counters and the MPLS maximum transmission unit (MTU) resides on top of the underlying physical or virtual interface to allow separation from non-MPLS data.

The enhancements also allow you to display indexing, statistics, and stacking relationships using the ifStackTable. MPLS layer interfaces are stacked above the underlying physical or virtual interface that is actually forwarding the MPLS traffic. MPLS traffic engineering tunnels are then stacked above those MPLS layers.

The IF MIB supports several types of interfaces. A virtual interface that provides protocol statistics for MPLS-encapsulated traffic has been added. This interface is stacked above real Cisco IOS interfaces or subinterfaces, such as Ethernet (et0) or ATM (at1/1.1).

Cisco IOS software creates a corresponding MPLS layer above each interface capable of supporting MPLS when the MPLS encapsulation is enabled by issuing the mpls ip interface configuration command.

You can also create the interface layer if you enable MPLS TE by using the mpls traffic-eng tunnels command in interface configuration mode.

You must also issue these commands in global configuration mode for MPLS IP or MPLS TE to be enabled.

An IF MIB entry is created when you enable either MPLS IP or MPLS TE tunnels on an interface; the entry is removed when you disable both MPLS IP and MPLS TE.

Entries for the MPLS layer do not appear in the ifRcvAddressTable.

The IF MIB supports the following scalar objects:

ifTableLastChange—The value of sysUpTime at the time of the last creation or deletion of an entry in the ifTable. If the number of entries has been unchanged since the last reinitialization of the local network management subsystem, then this object contains a zero value.

The ifStackTable within the IF MIB provides a conceptual stacking relationship between the interfaces and subinterfaces represented as entries in the ifTable. 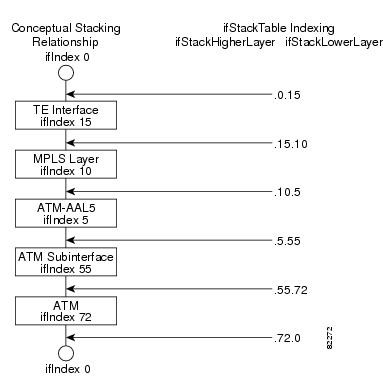 Table 3 describes the indexing of the ifStackTable for the layer relationships shown in Figure 1.

The order of the entries in Table 3 may not be the same as that seen in the MIB walk, which has to follow SNMP ordering rules.

MPLS TE tunnels are represented in Cisco IOS software and the IF MIB as virtual interfaces. When properly signaled, TE tunnels pass traffic through MPLS over a physical interface. This process dictates that a TE tunnel is to be stacked on an MPLS layer that is stacked on an underlying interface.

TE tunnels can also change paths in response to different error or network conditions. These changes are instigated by using the RSVP-TE signaling protocol. When a change occurs, a tunnel can switch to a different MPLS interface. If no signaling path exists, no paths will be chosen and thus no MPLS interface will be used.

Figure 2 shows a TE tunnel before (left) and after (right) being rerouted and the effect on the ifStackTable. When ifIndex 2 fails, the TE tunnel is rerouted through ifIndex1, the 15.2 entry is removed from the ifStackTable, and the 15.1 entry is added. 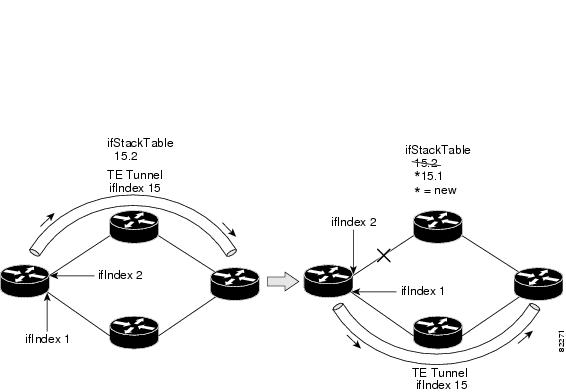 
The following objects from the mplsInterfaceConfTable are affected:

For TE tunnel interfaces, the stacking relationship reflects the current underlying MPLS interface that is in use and dynamically changes as TE tunnels reoptimize and reroute.

The MPLS layer shows MPLS-specific information including the following:

If MPLS is enabled

Configuration Examples for the MPLS Enhancements to Interfaces MIB (optional)

Perform the following task to enable the SNMP agent.


Configuration Examples for the MPLS Enhancements to Interfaces MIB

The following example shows how to enable an SNMP agent:

In the following example, SNMPv1 and SNMPv2C are enabled. The configuration permits any SNMP manager to access all objects with read-only permissions using the community string public.

ATM—Asynchronous Transfer Mode. The international standard for cell relay in which multiple service types (such as voice, video, or data) are conveyed in fixed-length (53-byte) cells. Fixed-length cells allow cell processing to occur in hardware, thereby reducing transit delays. ATM is designed to take advantage of high-speed transmission media, such as E3, SONET, and T3.

ATM-AAL5—ATM adaptation layer 5. One of four AALs recommended by the ITU-T. AAL5 supports connection-oriented variable bit rate (VBR) services and is used predominantly for the transfer of classical IP over ATM and LAN emulation (LANE) traffic. AAL5 uses simple and efficient AAL (SEAL) and is the least complex of the current AAL recommendations. It offers low bandwidth overhead and simpler processing requirements in exchange for reduced bandwidth capacity and error-recovery capability.

encapsulation—Wrapping of data in a particular protocol header. For example, Ethernet data is wrapped in a specific Ethernet header before network transit. Also, when bridging dissimilar networks, the entire frame from one network is simply placed in the header used by the data link layer protocol of the other network.

IETF—Internet Engineering Task Force. A task force (consisting of more than 80 working groups) that is developing standards for the Internet and the IP suite of protocols.

interface—The boundary between adjacent layers of the ISO model.

label—A short, fixed-length identifier that is used to determine the forwarding of a packet.

LSR—label switching router. A device that forwards MPLS packets based on the value of a fixed-length label encapsulated in each packet.

MPLS—Multiprotocol Label Switching. A method for forwarding packets (frames) through a network. It enables routers at the edge of a network to apply labels to packets (frames). ATM switches or existing routers in the network core can switch packets according to the labels with minimal lookup overhead.

NMS—network management system. System responsible for managing at least part of a network. An NMS is generally a reasonably powerful and well-equipped computer, such as an engineering workstation. NMSs communicate with agents to help keep track of network statistics and resources.

OID—object identifier. Values are defined in specific MIB modules. The Event MIB allows you or an NMS to watch over specified objects and to set event triggers based on existence, threshold, and Boolean tests. An event occurs when a trigger is fired; this means that a specified test on an object returns a value of true. To create a trigger, you or an NMS configures a trigger entry in the mteTriggerTable of the Event MIB. This trigger entry specifies the OID of the object to be watched. For each trigger entry type, corresponding tables (existence, threshold, and Boolean tables) are populated with the information required for carrying out the test. The MIB can be configured so that when triggers are activated (fired) either an SNMP Set is performed, a notification is sent out to the interested host, or both.

trap—A message sent by an SNMP agent to a network management station, console, or terminal, indicating that a significant event occurred. Traps are less reliable than notification requests, because the receiver does not send an acknowledgment when it receives a trap. The sender cannot determine if the trap was received.

tunnel—A secure communication path between two peers, such as routers.