The Dynamic Layer 3 VPNs with Multipoint GRE Tunnels feature provides a Layer 3 (L3) transport mechanism based on an enhanced multipoint generic routing encapsulation (mGRE) tunneling technology for use in IP networks. The dynamic Layer 3 tunneling transport can also be used within IP networks to transport Virtual Private Network (VPN) traffic across service provider and enterprise networks, and to provide interoperability for packet transport between IP and Multiprotocol Label Switching (MPLS) VPNs. This feature provides support for RFC 2547, which defines the outsourcing of IP backbone services for enterprise networks.

Your software release may not support all the features documented in this module. For the latest feature information and caveats, see the release notes for your platform and software release. To find information about the features documented in this module, and to see a list of the releases in which each feature is supported, see the "Feature Information for Dynamic L3 VPNs with mGRE Tunnels" section.

Before you configure the Dynamic Layer 3 VPNs with Multipoint GRE Tunnels feature, ensure that your MPLS VPN is configured and working properly. See the "Configuring MPLS Layer 3 VPNs" module for information about setting up MPLS VPNs.

The deployment of a MPLS VPN using both IP/GRE and MPLS encapsulation within a single network is not supported.

Each provider edge (PE) router supports one tunnel configuration only.

You can configure mGRE tunnels to create a multipoint tunnel network that overlays an IP backbone. This overlay connects PE routers to transport VPN traffic. To deploy L3 VPN mGRE tunnels, you create a VRF instance, create the mGRE tunnel, redirect the VPN IP traffic to the tunnel, and set up the BGP VPNv4 exchange so that updates are filtered through a route map and interesting prefixes are resolved in the VRF table.

In addition, when MPLS VPNs are configured over mGRE, you can deploy L3 PE-based VPN services using a standards-based IP core. This allows you to provision the VPN services without using the overlay method. When an MPLS VPN over mGRE is configured, the system uses IPv4-based mGRE tunnels to encapsulate VPN-labeled IPv4 and IPv6 packets between PEs.

By configuring mGRE tunnels, you create a multipoint tunnel network as an overlay to the IP backbone. This overlay interconnects the PE routers to transport VPN traffic through the backbone. This multipoint tunnel network uses Border Gateway Protocol (BGP) to distribute VPNv4 routing information between PE routers, maintaining the peer relationship between the service provider or enterprise network and customer sites. The advertised next hop in BGP VPNv4 triggers tunnel endpoint discovery. This feature provides the ability for multiple service providers to cooperate and offer a joint VPN service with traffic tunneled directly from the ingress PE router at one service provider directly to the egress PE router at a different service provider site.

In addition to providing the VPN transport capability, the mGRE tunnels create a full-mesh topology and reduce the administrative and operational overhead previously associated with a full mesh of point-to-point tunnels used to interconnect multiple customer sites. The configuration requirements are greatly reduced and enable the network to grow with minimal additional configuration.

Dynamic L3 tunnels provide for better scaling when creating partial-mesh or full-mesh VPNs. Adding new remote VPN peers is simplified because only the new router needs to be configured. The new address is learned dynamically and propagated to the nodes in the network. The dynamic routing capability dramatically reduces the size of configuration needed on all routers in the VPN, such that with the use of multipoint tunnels, only one tunnel interface needs to be configured on a PE that services many VPNs. The L3 mGRE tunnels need to be configured only on the PE router. Features available with GRE are still available with mGRE, including dynamic IP routing and IP multicast and Cisco Express Forwarding (CEF) switching of mGRE/Next Hop Routing Protocol (NHRP) tunnel traffic.

The following sections describe how the mGRE tunnels are used: 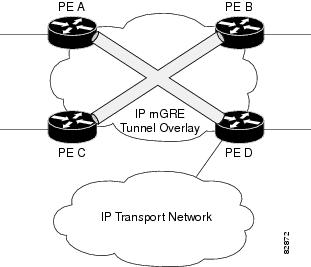 The multiaccess tunnel overlay network provides full connectivity between PE routers. The PE routers exchange VPN routes by using BGP as defined in RFC 2547. IP traffic is redirected through the multipoint tunnel overlay network using distinct IP address spaces for the overlay and transport networks and by changing the address space instead of changing the numerical value of the address. For the packet transport to occur between the IP and MPLS network, the MPLS VPN label is mapped to the GRE key. The mapping takes place on the router where both mGRE and MPLS are configured. In Figure 2 the mapping of the label to the key occurs on Router M, which sits on the MPLS network.

BGP performs the BGP path selection, or next hop verification, at the PE. For a BGP path to a network to be considered in the path selection process, the next hop for the path must be reachable in the Interior Gateway Protocol (IGP). When an IP prefix is received and advertised as the next hop IP address, the IP traffic is tunneled from the source to the destination by switching the address space of the next hop.

Creating the VRF and mGRE Tunnel

The tunnel that transports the VPN traffic across the service provider network resides in its own address space. A special VRF instance must be created called Resolve in VRF (RiV). This section describes how to create the VRF and GRE tunnel.

Tunnel mode IPSec is not supported on MPLS over GRE Tunnel.

The configuration task described in this section sets up the BGP VPNv4 exchange so that the updates are filtered through a route map and interesting prefixes are resolved in the VRF table.

This section describes how to define the VRF, enable MPLS VPN over mGRE, and configure an L3VPN encapsulation profile.

Transport protocols such as IPv6, MPLS, IP, and Layer 2 Tunneling Protocol version 3 (L2TPv3) can also be used in this configuration.

To enable and configure MPLS VPN over mGRE, you must first define the VRF for tunnel encapsulation and enable L3VPN encapsulation in the system.

This section describes how to define the address space and specify the address resolution for MPLS VPNs over mGRE. The following steps also enable you to link the route map to the application template and set up the BGP VPNv4 and VPNv6 exchange so that updates are filtered through the route map.


What to Do Next

You can perform the following to make sure that the configuration is working properly.

Verify that the specified VRF prefix has been received by BGP. The BGP table entry should show that the route map has worked and that the next hop is showing in the RiV. Use the show ip bgp vpnv4 command as shown in this example.

Confirm that the same information has been propagated to the routing table:

You can also verify that CEF switching is working as expected:

Note that in this example display the tunnel endpoint has been created correctly:

Confirm that the corresponding adjacency has been created.

You can use the show l3vpn encapsulation profile-name command to get information on the basic state of the application. The output of this command provides you details on the references to the tunnel and VRF.

This example shows the configuration sequence for creating mGRE tunnels. It includes the definition of the special VRF instance.

This example shows the configuration to link a route map to the application:

Table 1 lists the features in this module and provides links to specific configuration information. Only features that were introduced or modified in Cisco IOS Release 12.0(23)S or a later release appear in the table.