The Bisync-to-IP Conversion for Automated Teller Machines feature enables customers to attach a binary synchronous communication (bisync) automated teller machine to a serial interface on a Cisco router running bisync-to-IP (BIP) protocol translation, and then to route the data over a TCP/IP network directly to an IP-based application host.

This feature works by removing the bisync protocol headers enclosing the application data, creating a TCP/IP connection with the application host, and delivering the data directly to the TCP/IP application running on that host.

At the router, application data from the attached bisync device is encapsulated in IP. At the host site, traffic is delivered directly to the application host computer through use of a new command provided with this feature, bstun route (BIP). The bstun route (BIP) command is used to specify BIP peer tunneling as the method to be used to encapsulate data from a Block Serial Tunnel (BSTUN) interface to a bisync device to a remote host over an IP network. For more information about this command, see the "Command Reference" section of this document.

Figure 1 shows how you can configure the bisync link between two devices so that converted traffic is delivered to a host using BIP. 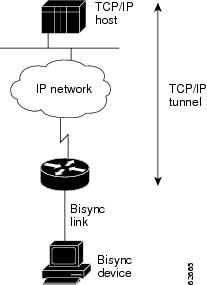 Figure 2 shows how you can configure the bisync link between multiple routers and multiple bisync devices so that converted traffic is delivered to a host using BIP. 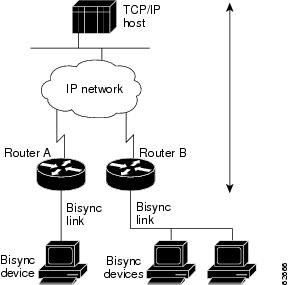 This feature is closely associated with BSTUN and the procedures for configuring them. To configure this feature, you will use many of the same procedures and commands required for configuring BSTUN, without the previous requirement of terminating the connection on a peer Cisco router and recreating the bisync serial protocol at the peer. For this feature, rather than one end of the tunnel terminating on another router, the tunnel terminates on a non-Cisco host computer. This feature is designed to address the specific requirements of automated teller machines only, and requires that the host application accommodate this specific method. This restriction is necessary because the Bisync-to-IP Conversion for Automated Teller Machines feature provides conversion for a single device within a 3270 control unit.

For more information, see the "Prerequisites" section and the "Configuration Tasks" section later in this document.

As of Cisco IOS Release 12.2(13)T you can use the bstun peer-map-poll command in global configuration mode to map the Automated Teller Machine state to polling. The default is to not map the peer state to polling. If you configure this command, BIP activates polling when the BIP tunnel becomes active and stops polling when the tunnel connection is terminated. When the peer state-to-polling is not mapped, BIP waits for the host to issue an "active" status message across the BIP tunnel before polling the Automated Teller Machine device and polling is stopped when an "inactive" status message is received across the tunnel or the tunnel connection is terminated.

This feature has the advantage of removing complexity from central data centers, thus reducing cost and enabling a data center to more easily use multiservice applications. At the same time, it improves system performance by removing potential points of failure and allowing for multiple paths for delivery of the application data.

This feature supports the conversion of bisync to native TCP for direct delivery to host applications enabled for TCP devices. This enhanced support eliminates the need for headend tunnel routers, and allows for network designs that provide higher availability. It allows the remote, serially attached bisync device to attach to the application host through a LAN interface instead of through a serial interface.

This feature addresses the specific requirements of automated teller machines only. It requires that the host application accommodate removing the BIP headers encapsulating the application data. This restriction is necessary because the Bisync-to-IP Conversion for Automated Teller Machines feature provides conversion for a single device within a 3270 control unit.

Cisco Feature Navigator is a web-based tool that enables you to determine which Cisco IOS software images support a specific set of features and which features are supported in a specific Cisco IOS image. You can search by feature or release. Under the release section, you can compare releases side by side to display both the features unique to each software release and the features in common.

To access Cisco Feature Navigator, you must have an account on Cisco.com. If you have forgotten or lost your account information, send a blank e-mail to cco-locksmith@cisco.com. An automatic check will verify that your e-mail address is registered with Cisco.com. If the check is successful, account details with a new random password will be e-mailed to you. Qualified users can establish an account on Cisco.com at this URL:

To find the releases and platforms associated with this feature, choose BIP from the list of available features.

Before you configure the Bisync-to-IP Conversion for Automated Teller Machines feature, BSTUN must be enabled. For more information about BSTUN, refer to the following chapters of the Cisco IOS Bridging and IBM Networking Configuration Guide, Release 12.2:

See the following sections for configuration tasks for the Bisync-to-IP Conversion for Automated Teller Machines feature. Each task in the list is identified as either required or optional.

Assigning a Serial Interface to a BSTUN Group (required)

Specifying How Frames Are Forwarded (required)

Verifying the Status of BSTUN (optional)

To enable BSTUN in IP networks, use the following command in global configuration mode:

To map the peer state to polling, us the following command in global configuration mode:

To define the protocol group, use the following command in global configuration mode:

The bsc-local-ack keyword is the only one supported by BIP.

To set the amount of time for the system to wait before trying to reconnect to a peer, use the following command in global configuration mode:

To enable detection of the loss of a peer, use the following commands in global configuration mode, as needed:

Configuring BSTUN on the Serial Interface

Configure the encapsulation bstun command on an interface before configuring any other BSTUN commands for the interface.

Assigning a Serial Interface to a BSTUN Group

To configure bisync options on a serial interface, use the following commands in interface configuration mode, as needed:

Specifying How Frames Are Forwarded

To specify how frames are forwarded when received on a BSTUN interface, use the following command in interface configuration mode:

Verifying the Status of BSTUN

To display statistics for BSTUN interfaces, protocol groups, number of packets sent and received, local acknowledgment states, and other activity information, use the following commands in privileged EXEC mode, as needed:

This section provides the following BSTUN traffic routing example. BSTUN traffic with the control unit address C5 is routed to and from the host computer specified by the IP address 192.168.60.100. The BIP form of TCP encapsulation (as indicated by the bip keyword) is used to propagate the serial frames.

The following commands are introduced or modified in the feature or features documented in this module. For information about these commands, see the Cisco IOS Bridging Command Reference at http://www.cisco.com/en/US/docs/ios/bridging/command/reference/br_book.html or the Cisco IOS IBM Networking Command Reference at http://www.cisco.com/en/US/docs/ios/ibm/command/reference/ibm_book.html. For information about all Cisco IOS commands, go to the Command Lookup Tool at http://tools.cisco.com/Support/CLILookup or to the Cisco IOS Master Commands List.