Prerequisites for MPLS VPN CSC with LDP and IGP

Restrictions for MPLS VPN CSC with LDP and IGP

The following features are not supported with this feature:

The following router platforms are supported on the edge of the MPLS VPN:

Information About MPLS VPN CSC with LDP and IGP

A backbone carrier offers Border Gateway Protocol and Multiprotocol Label Switching (BGP/MPLS) VPN services. The customer carrier can be either:

The MPLS VPN CSC network provides the following benefits to service providers who are backbone carriers and to customer carriers.

Benefits to the Backbone Carrier

Benefits to the Customer Carriers

Configuration Options for MPLS VPN CSC with LDP and IGP

The backbone carrier offers BGP and MPLS VPN services. The customer carrier can be one of the two types of service providers described in the following sections, which explain how the backbone and customer carriers distribute IPv4 routes and MPLS labels.

Customer Carrier Is an ISP

This section explains how a BGP/MPLS VPN service provider (backbone carrier) can provide a segment of its backbone network to a customer who is an ISP.

An ISP has two sites: one in California, the other in Maine. Each site is a point of presence (POP). The ISP wants to connect these sites using a VPN service provided by a backbone carrier. The figure below illustrates this situation.

Internal and external routes are differentiated this way:

Figure 2. Backbone Carrier Exchanging Routing Information with a Customer Carrier Who Is an ISP 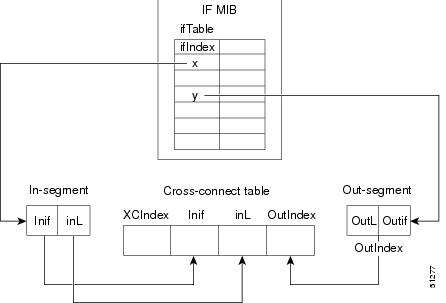 In the figure below, routes are created between the backbone carrier and the customer carrier sites. ASBR2 receives an Internet route that originated outside the network. All routers in the ISP sites have all the external routes through IBGP connections among them.

Figure 3. Establishing a Route Between a Backbone Carrier and a Customer Carrier Who Is an ISP

The table below describes the process of establishing the route, which can be divided into two distinct steps:

When a backbone carrier and the customer carrier both provide BGP/MPLS VPN services, the method of transporting data is different from when a customer carrier provides only ISP services. The following list highlights those differences:

The figure below shows how information is exchanged when MPLS VPN services reside on all customer carrier sites and on the backbone carrier.

Figure 4. Backbone Carrier Exchanging Information with a Customer Carrier Who Is an MPLS VPN Service Provider 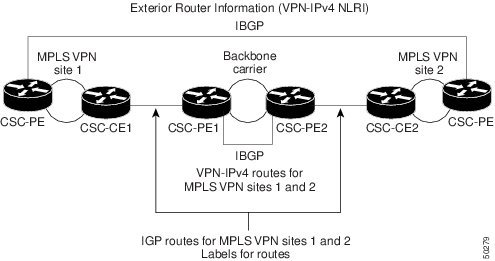 In the example shown in the figure below, routes are created between the backbone carrier and the customer carrier sites.

Figure 5. Establishing a Route Between a Backbone Carrier and a Customer Carrier Who Is an MPLS VPN Service Provider

The table below describes the process of establishing the route.

How to Configure MPLS VPN CSC with LDP and IGP

Configuring the backbone carrier core requires configuring connectivity and routing functions for the CSC core and the CSC-PE routers.

Before you configure a backbone carrier core, configure the following on the CSC core routers:

Verifying IP Connectivity and LDP Configuration in the CSC Core

You can use the ping and trace commands to verify complete MPLS connectivity in the core. You also get useful troubleshooting information from the additional show commands.

Enter a show ip vrf detail command and make sure the MPLS VPN is up and associated with the right interfaces.

Configuring Multiprotocol BGP for VPN Connectivity in the Backbone Carrier

Perform this task to configure Multiprotocol BGP (MP-BGP) connectivity in the backbone carrier.

You can enter a show ip bgp neighbor command to verify that the neighbors are up and running. If this command generates an error message, enter a debug ip bgp x.x.x.x events command, where x.x.x.x is the IP address of the neighbor.

To enable the CSC-PE and CSC-CE routers to distribute routes and MPLS labels, perform the following tasks:

MPLS LDP is required between the PE and CE routers that connect the backbone carrier to the customer carrier. You can configure LDP as the default label distribution protocol for the entire router or just for the PE-to-CE interface for VRF.

Every packet that crosses the backbone carrier must be encapsulated, so that the packet includes MPLS labels. You can enable MPLS encapsulation for the entire router or just on the interface of the PE or CE router. To enable the encapsulation of packets, perform the following task.

Configuration Examples for MPLS VPN CSC with LDP and IGP

Figure 6. Carrier Supporting Carrier Network with a Customer Carrier Who Is an ISP

The following examples show the configuration of each router in the carrier supporting carrier network. OSPF is used to connect the customer carrier to the backbone carrier.

Figure 7. Carrier Supporting Carrier Network with a Customer Carrier Who Is an MPLS VPN Provider

The following configuration examples show the configuration of each router in the carrier supporting carrier network. OSPF is the protocol used to connect the customer carrier to the backbone carrier.

The figure below shows a carrier supporting carrier network configuration that contains route reflectors. The customer carrier has two sites. 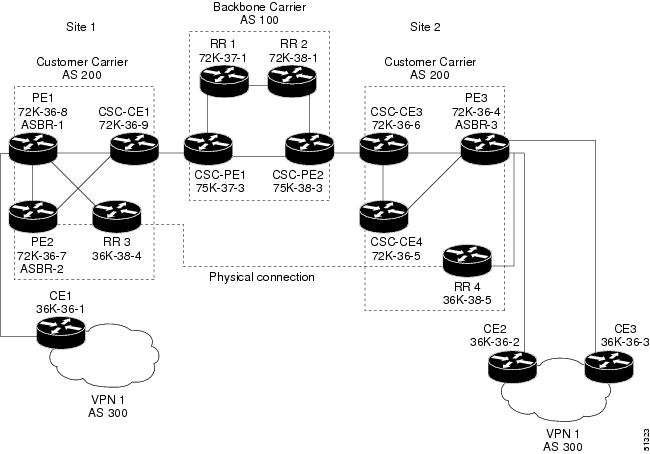 The figure below shows a carrier supporting carrier network configuration where the customer carrier has VPNs at the network edge. 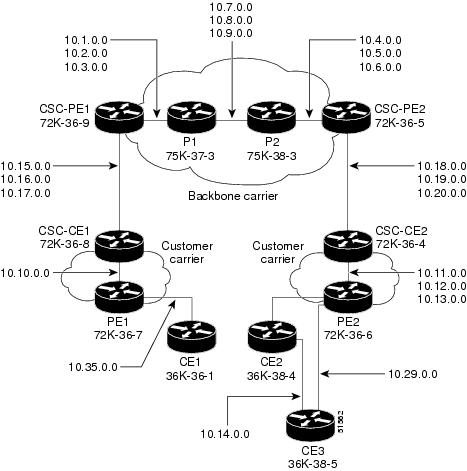 Feature Information for MPLS VPN CSC with LDP and IGP

ASBR -- Autonomous System Boundary router. A router that connects one autonomous system to another.

autonomous system --A collection of networks under a common administration sharing a common routing strategy.

BGP --Border Gateway Protocol. An interdomain routing protocol that exchanges network reachability information with other BGP systems (which may be within the same autonomous system or between multiple autonomous systems).

CE router--customer edge router. A router that is part of a customer network and that interfaces to a provider edge (PE) router. CE routers do not recognize associated MPLS VPNs.

edge router--A router that is at the edge of the network. It defines the boundary of the MPLS network. It receives and transmits packets. Also referred to as edge label switch router and label edge router.

NLRI --Network Layer Reachability Information. The BGP sends routing update messages containing NLRI to describe a route and how to get there. In this context, an NLRI is a prefix. A BGP update message carries one or more NLRI prefixes and the attributes of a route for the NLRI prefixes; the route attributes include a BGP next hop gateway address and extended community values.

PE router--provider edge router. A router that is part of a service provider’s network. It is connected to a customer edge (CE) router. All MPLS VPN processing occurs in the PE router.

QoS --quality of service. Measure of performance for a transmission system that indicates its transmission quality and service availability.

RD --route distinguisher. An 8-byte value that is concatenated with an IPv4 prefix to create a unique VPN-IPv4 prefix.

RT --route target. Extended community attribute used to identify the VRF routing table into which a prefix is imported.

VPN --Virtual Private Network. A secure MPLS-based network that shares resources on one or more physical networks (typically implemented by one or more service providers). A VPN contains geographically dispersed sites that can communicate securely over a shared backbone network.