The SNMP objects defined in the MPLS TE MIB can be displayed by any standard SNMP utility. All MPLS TE MIB objects are based on the IETF draft MIB; thus, no specific Cisco SNMP application is required to support the functions and operations pertaining to the MPLS TE MIB.

The MPLS TE facilities built into Cisco software provide a feature-rich, integrated approach to managing the large volumes of traffic that typically flow through WANs. The MPLS TE facilities are integrated into Layer 3 network services, thereby optimizing the routing of IP traffic in the face of constraints imposed by existing backbone transmission capacities and network topologies.

When MPLS TE notifications are enabled (see the snmp-server enable traps mpls command), notification messages relating to specific events within Cisco software are generated and sent to a specified NMS in the network.

For example, an mplsTunnelUp notification is sent to an NMS when an MPLS TE tunnel is configured and the tunnel transitions from an operationally "down" state to an "up" state.

Conversely, an mplsTunnelDown notification is generated and sent to an NMS when an MPLS TE tunnel transitions from an operationally "up" state to a "down" state.

An mplstunnelRerouted notification is sent to the NMS under the following conditions:

Path options are configurable parameters that you can use to specify the order of priority for establishing a new tunnel path. For example, you can create a tunnel head configuration and define any one of many path options numbered 1 through n, with "1" being the highest priority option and "n" being an unlimited number of lower priority path options. Thus, there is no limit to the number of path options that you can specify in this manner.

The SNMP agent code supporting the MPLS TE MIB follows the existing model for such code in Cisco software and is, in part, generated by the Cisco tool set, based on the MIB source code.

The SNMP agent code, which has a layered structure similar to that of the MIB support code in Cisco software, consists of four layers:

Features and Technologies Related to the MPLS Traffic Engineering MIB

The MPLS TE MIB feature is used with the following features and technologies:

Tunnel configurations exist only on the tunnel head where the tunnel interface is defined. LSPs traverse the network and involve tunnel heads, tunnel midpoints, and tunnel tails.

Pointers in the tunnel table refer to corresponding entries in other MIB tables. By using these pointers, you can find an entry in the mplsTunnelTable and follow a pointer to other tables for additional information. The pointers are the following: mplsTunnelResourcePointer, mplsTunnelHopTableIndex, mplsTunnelARHopTableIndex, and mplsTunnelCHopTableIndex.

Following is a list and description of each entry.

The tunnel resource table is indexed by address and hop number. Following the mplsTunnelResourcePointer pointer from the tunnel table is the best way to retrieve information from this table.

The actual route hop table is indexed by address and hop number. Following the mplsTunnelARHopTableIndex pointer from the tunnel table is the best way to retrieve information from this table.

The computed hop table is indexed by address and hop number. Following the mplsTunnelCHopTableIndex pointer from the tunnel table is the best way to retrieve information from this table.

If the mplsTunnelTrapEnable object is set to "FALSE," such operational status notifications are not generated. These notification functions are based on the definitions (mplsTeNotifications) contained in the IETF draft document entitled draft-ietf-mpls-te-mib-05.txt . 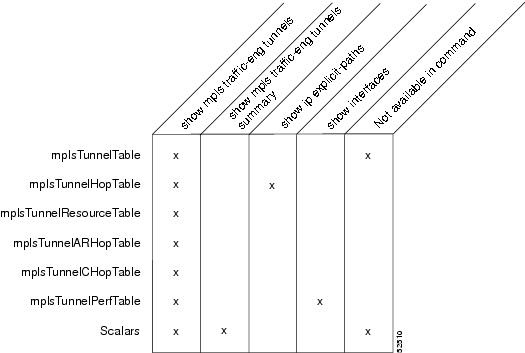 This section describes how to efficiently retrieve information about TE tunnels. Such information can be useful in large networks that contain many TE tunnels.

Because tunnels are treated as interfaces, the tunnel table column (mplsTunnelIfIndex) provides an index into the Interfaces MIB that you can use to retrieve interface-specific information about a tunnel.

How to Configure the MPLS Traffic Engineering MIB

Verifying the Status of the SNMP Agent

To verify that the SNMP agent has been enabled on a host network device, perform the following steps.

The follows example displays the running configuration on the target device and its SNMP information.

Any snmp-server statement that appears in the output and takes the form shown here verifies that SNMP has been enabled on that device.

The following example shows how to enable an SNMP agent on a host network device:

The following example shows how to enable SNMPv1 and SNMPv2C. The configuration permits any SNMP agent to access all MPLS TE MIB objects with read-only permissions using the community string public.

call admission precendence --An Multiprotocol Label Switching (MPLS) traffic engineering tunnel with a higher priority will, if necessary, preempt an MPLS traffic engineering tunnel with a lower priority. An expected use is that tunnels that are more difficult to route will have a higher priority, and can preempt tunnels that are less difficult to route, on the assumption that those lower priority tunnels can find another path.

constraint-based routing--Procedures and protocols used to determine a route across a backbone taking into account resource requirements and resource availability, instead of simply using the shortest path.

flow --A traffic load entering the backbone at one point--point of presence (POP)--and leaving it from another that must be traffic engineered across the backbone. The traffic load will be carried across one or more LSP tunnels running from the entry POP to the exit POP.

headend --The label switch router (LSR) at which the tunnel originates. The tunnel's "head" or tunnel interface will reside at this LSR as well.

LSP --label switched path. A path that is followed by a labeled packet over several hops, starting at an ingress label switch router (LSR) and ending at an egress LSR.

LSR --label switch router. A Layer 3 router that forwards a packet based on the value of a label encapsulated in the packet.

MPLS --Multiprotocol Label Switching. Switching method that forwards IP traffic using a label. This label instructs the routers and the switches in the network where to forward the packets based on preestablished IP routing information.

NMS --network management station. An NMS is a powerful, well-equipped computer (typically an engineering workstation) that is used by a network administrator to communicate with other devices in the network. An NMS is typically used to manage network resources, gather statistics, and perform a variety of network administration and configuration tasks.

notification --A message sent by a Simple Network Management Protocol (SNMP) agent to a network management station, console, or terminal to indicate that a significant event within Cisco software has occurred (see traps).

tailend --The downstream, receive end of a tunnel.

traffic engineering --Techniques and processes that cause routed traffic to travel through the network on a path other than the one that would have been chosen if standard routing methods were used.

trap --A message sent by a Simple Network Management Protocol (SNMP) agent to a network management station, console, or terminal to indicate that a significant event within Cisco software has occurred. Traps (notifications) are less reliable than inform requests, because the receiver of the trap does not send an acknowledgment of receipt; furthermore, the sender of the trap cannot determine if the trap was received (see notification).

VCC --virtual channel connection. A VCC is a logical circuit consisting of VCLs that carries data between two endpoints in an ATM network. Sometimes called a virtual circuit connection.

VCI --virtual channel identifier. A 16-bit field in the header of an ATM cell. The VCI, together with the VPI, is used to identify the next network VCL as the cell passes through a series of ATM switches on its way to its final destination.

VCL --virtual channel link. A VCL is the logical connection that exists between two adjacent switches in an ATM network.

VPI --virtual path identifier. An 8-bit field in the header of an ATM cell. The VPI, together with the VCI, is used to identify the next network VCL as the cell passes through a series of ATM switches on its way to its final destination.