The PWE3 MIBs are limited to read-only (RO) permission for MIB objects except for the cpwVcUp and cpwVcDown notification enable object, cpwVcUpDownNotifEnable, which has been extended to be writable by the SNMP agent.

The Function of a Pseudowire in the PWE3 MIBs

A pseudowire is a point-to-point connection between pairs of provider edge (PE) routers (as shown in the figure below). Its primary function is to emulate services like Ethernet over an underlying core MPLS network through encapsulation into a common MPLS format. By encapsulating services into a common MPLS format, a pseudowire allows carriers to converge their services to an MPLS network.

The PWE3 MIBs architecture shown in the figure below categorizes three groups of MIBs that, when used together, provide the complete emulated service; the native transport, which carries the service across the core network; and the relationship between the two. 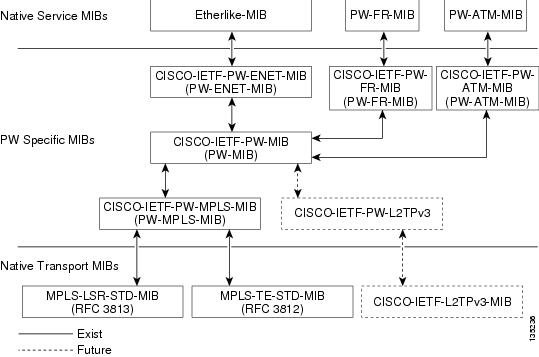 The architecture is modular in that once deployed, new emulated service MIB modules or additional transport MIB modules “plug in” to or extend the existing infrastructure rather than require a new and unique one. This allows you to build management applications without the concern of a new service requiring the deployment of a completely different management strategy. Because the architecture is a generalized association mechanism between existing service and transport MIB modules, native MIB modules work in the absence of the associated PWE3-specific MIBs. The advantage is that if a PWE3-specific MIB has not yet been deployed in Cisco software, which associates a service or transport with pseudowires, these MIB modules can still be queried. However, the only drawback is that the associations with the pseudowires are absent.

Components and Functions of the PWE3 MIBs

The PWE3 MIBs have the following components and functions:

This MIB binds the PW-MPLS-MIB and the PW-ENET-MIB together, and provides status of the pseudowire emulation and statistics and configuration information. The PW-MIB also defines the notifications for pseudowire fault and event monitoring.

This MIB contains managed objects that can be used by a network manager to monitor pseudowire emulation MPLS services, such as MPLS-traffic engineering (TE)-PSN and MPLS-non-TE-PSN.

This MIB shows the following:

This MIB contains managed objects that can be used by a network manager to monitor pseudowire emulation Ethernet services.

This MIB contains managed objects that can be used by a network manager to monitor pseudowire emulation Frame Relay services.

The PW-FR-MIB is defined at the Pseudowire Service Emulation Layer and resides on top of the generic PW-MIB as shown in the figure above. Therefore, the PW-FR-MIB is highly dependent on the existence and the service provided by the PW-MIB. In addition, an existing PW-FR connection entry must associate with an existing VC entry in the PW-MIB.

The PW-FR-MIB and the generic PW-MIB are logically tied by the PW VC Index, which is an internal index defined to support the PW-MIB. Each PW VC index uniquely maps into an existing VC entry in the PW-MIB and the PW-FR-MIB.

This MIB contains managed objects that can be used by a network manager to monitor pseudowire emulation ATM services.

The PW-ATM-MIB is defined at the Pseudowire Service Emulation Layer and resides on top of the generic PW-MIB as shown in the figure above. Therefore, the PW-ATM-MIB is highly dependent on the existence and the service provided by the PW-MIB. In addition, an existing PW-ATM connection entry must associate with an existing VC entry in the PW-MIB.

The PW-ATM-MIB and the generic PW-MIB are logically tied by the PW VC Index, which is an internal index defined to support the PW-MIB. Each PW VC index uniquely maps into an existing VC entry in the PW-MIB and the PW-ATM-MIB.

The PW-MIB consists of the following tables:

The table below lists the cpwVcTable objects and their descriptions.

The table below lists the cpwVcPerfTotalTable objects and their descriptions.

The table below lists the cpwVcIdMappingTable objects and their descriptions.

The table below lists the cpwVcPeerMappingTable objects and their descriptions.

The PW-MPLS-MIB consists of the following tables:

The table below lists the cpwVcMplsTable objects and their descriptions.

The table below lists the cpwVcMplsOutboundTable objects and their descriptions.

The table below lists the cpwVcMplsInboundTable objects and their descriptions.

The table below lists the cpwVcMplsNonTeMappingTable objects and their descriptions.

The table below lists the cpwVcMplsTeMappingTable objects and their descriptions.

The PW-ENET-MIB consists of the following table:

The table below lists the cpwVcEnetTable objects and their descriptions.

The PW-FR-MIB consists of the following table:

The table below lists the cpwVcFrTable objects and their descriptions.

The PW-ATM-MIB consists of the following tables:

The table below lists the cpwVcAtmTable objects and their descriptions.

The table below lists the cpwVcAtmPerfTable objects and their descriptions.

Objects in the PWE3 MIBs

The PWE3 MIBs represent an ASN.1 notation reflecting specific components of the pseudowire services. The MIBs enable a network management application using SNMP to get this information for display. The MIBs support the standard GETNEXT and GETBULK functionality, but do not support configuration capabilities (via SET) in the current implementation.

Scalar Objects in the PWE3 MIBs

Notifications in the PWE3 MIBs

The cpwVcUp and cpwVcDown notifications in the PW-MIB indicate when the operStatus values for a range of PW VCs have changed state.

Benefits of the PWE3 MIBs

The PWE3 MIBs provide the ability to manage pseudowire emulation edge-to-edge by providing MPLS-related information about the service and a mechanism to monitor the Ethernet, Frame Relay, or ATM access circuits.

Enabling the SNMP Agent for the PWE3 MIBs

The successful transmission of the Layer 2 frames between PE routers is due to the configuration of the PE routers. You configure the connection, called a pseudowire, between the routers.

The pseudowire-class configuration group specifies the following characteristics of the tunneling mechanism:

In the following example, the configuration permits any SNMP manager to access all objects with read-only permissions using the community string public .

There are notifications specific to the PWE3 MIBs. For detailed information on the commands used to configure them, see the "Additional References" section.

AAL —ATM adaptation layer. AAL defines the conversion of user information into cells. AAL1 and AAL2 handle isochronous traffic, such as voice and video; AAL3/4 and AAL5 pertain to data communications through the segmentation and reassembly of packets.

ATM —asynchronous transfer mode. A cell-based data transfer technique in which channel demand determines packet allocation. This is an international standard for cell relay in which multiple service types (such as voice, video, or data) are conveyed in fixed-length (53-byte) cells. Fixed-length cells allow cell processing to occur in hardware, thereby reducing transit delays. ATM is designed to take advantage of high-speed transmission media such as E3, SONET, and T3.

CE router—customer edge router. A router that is part of a customer network and that interfaces to a provider edge (PE) router.

encapsulation —Wrapping of data in a particular protocol header. For example, Ethernet data is wrapped in a specific Ethernet header before network transit. Also, when bridging occurs in dissimilar networks, the entire frame from one network is simply placed in the header used by the data link layer protocol of the other network.

EoMPLS —Ethernet over multiprotocol label switching (MPLS). A tunneling mechanism that allows a service provider to tunnel customer Layer 2 traffic through a Layer 3 MPLS network. EoMPLS is a point-to-point solution only. EoMPLS is also known as Layer 2 tunneling.

IETF —internet engineering task force. A task force (consisting of more than 80 working groups) that is developing standards for the Internet and the IP suite of protocols.

LDP —label distribution protocol. The protocol that supports MPLS hop-by-hop forwarding and the distribution of bindings between labels and network prefixes. The Cisco proprietary version of this protocol is the Tag Distribution Protocol (TDP).

LSP —label switched path. A configured connection between two label switch routers (LSRs) in which label-switching techniques are used for packet forwarding; also a specific path through an MPLS network.

LSR —label switch router. A Multiprotocol Label Switching (MPLS) node that can forward native Layer 3 packets. The LSR forwards a packet based on the value of a label attached to the packet.

MPLS—multiprotocol label switching. A switching method for the forwarding of IP traffic through the use of a label. This label instructs the routers and the switches in the network where to forward the packets based on preestablished IP routing information.

NMS—network management system. System responsible for managing at least part of a network. An NMS is generally a reasonably powerful and well-equipped computer, such as an engineering workstation. An NMS communicates with agents to help keep track of network statistics and resources.

notification —A message sent by a Simple Network Management Protocol (SNMP) agent to a network management station, console, or terminal to indicate that a significant network event has occurred. See also trap.

PE router—provider edge router. A router that is part of a service provider’s network and is connected to a customer edge (CE) router.

primary tunnel—A tunnel whose label-switched path (LSP) may be fast rerouted if there is a failure. Backup tunnels cannot be primary tunnels.

pseudowire —PW. A mechanism that carries the elements of an emulated service from one provider edge (PE) to one or more PEs over a packet switched network (PSN).

trap—A message sent by an SNMP agent to a network management station, console, or terminal, indicating that a significant event occurred. Traps are less reliable than notification requests because the receiver does not send an acknowledgment when it receives a trap. The sender cannot determine if the trap was received.

tunnel —A secure communication path between two peers, such as routers.