Cisco Open Short Shortest Path First version 3 (OSPFv3) allows you to configure a Not-So-Stubby Area (NSSA). An NSSA is similar to a stub area, except that an NSSA allows you to import autonomous system (AS) external routes within an NSSA using redistribution. This feature adds support for the OSPFv3 NSSA specification described by RFC 3101. RFC 3101 replaced and is backward compatible with RFC 1587.

Information About Configuring NSSA for OSPFv3

RFC 3101 compliance is automatically enabled on the devices. Use the compatible rfc1587 command in router configuration mode to revert to route selection that is based on RFC 1587. When you configure the device to be compatible with RFC 1587, the device performs the following actions:

Use the Not-So-Stubby Area (NSSA) for Open Shortest Path First version 3 (OSPFv3) feature to simplify administration in a network that connects a central site that uses OSPFv3 to a remote site that uses a different routing protocol.

When the NSSA feature is not implemented, the connection between the border device at the corporate site and the remote device is not established as an OSPFv3 stub area due to following reasons:

A protocol such as Routing Information Protocol (RIP) for IPv6 is run to handle the redistribution. By implementing NSSA, you can extend OSPFv3 to include the remote connection by defining the area between the border device at the corporate site and the remote device as an NSSA.

As with OSPFv3 stub areas, NSSA areas cannot be injected with distributed routes via a Type 5 Link State Advertisement (LSA). Route redistribution into an NSSA area is possible only with a Type 7 LSA. An NSSA Autonomous System Border Router (ASBR) generates the Type 7 LSA , and an NSSA Area Border Router (ABR) translates the Type 7 LSA into a Type 5 LSA. These LSAs can be flooded throughout the OSPFv3 routing domain. Route summarization and filtering are supported during the translation.

Route summarization is the consolidation of advertised addresses. This feature enables an ABR to advertise a single summary route to other areas. If the network numbers in an area are assigned in a way such that they are contiguous, you can configure the ABR to advertise a summary route that covers all the individual networks within the area that fall into the specified range.

When routes from other protocols are redistributed into an OSPFv3 area, each route is advertised individually in an external LSA. However, you can configure the Cisco IOS software to advertise a single route with a specified network address and mask for all the redistributed routes that are covered by a specified network address and mask. Thus, the size of the OSPFv3 link-state database decreases.

RFC 3101 allows you to configure an NSSA ABR device as a forced NSSA LSA translator.

The figure below shows a network diagram in which OSPFv3 Area 1 is defined as the stub area. The Enhanced Interior Gateway Routing Protocol (EIGRP) routes are not propagated into the OSPFv3 domain because routing redistribution is not allowed in the stub area. However, once OSPFv3 Area 1 is defined as an NSSA, an NSSA ASBR can include the EIGRP routes to the OSPFv3 NSSA by generating Type 7 LSAs. 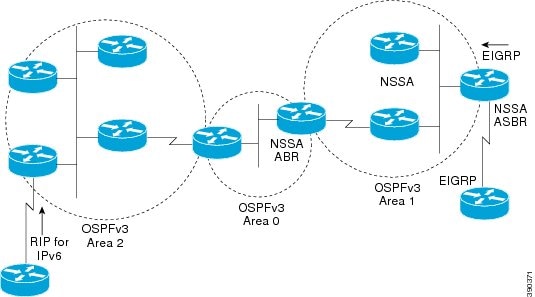 The redistributed routes from the RIP device are not allowed into OSPFv3 Area 1 because NSSA is an extension to the stub area. The stub area characteristics still exist, including the exclusion of Type 5 LSAs.

The figure below shows the OSPFv3 stub network with NSSA Area 1. The redistributed routes that Device 4 is propagating from the two RIP networks are translated into Type 7 LSAs by NSSA ASBR Device 3. Device 2, which is configured to be the NSSA ABR, translates the Type 7 LSAs back to Type 5 so that they can be flooded through the rest of the OSPFv3 stub network within OSPFv3 Area 0.

How to Configure NSSA for OSPFv3

Configuring an OSPFv3 NSSA Area and Its Parameters

6.    Enter either of the following commands:

Use the show ospfv3 command to confirm that the device is acting as an Autonomous System Border Router (ASBR) and that the Open Shortest Path First version 3 (OSPFv3) Area 1 has been configured as a Not-So-Stubby Area (NSSA) area.

The table below describes the significant show ip ospf display fields and their descriptions.

The output of the router LSA in LSDB shows Nt-Bit if it is set in the header of LSA.

The “Unconditional NSSA translator” line indicates that the status of the NSSA ASBR router is as a forced NSSA LSA translator.