Half-duplex stacking using only one GBIC slot for each switch

Stack up to nine switches to form an independent backbone that can be managed with a single IP address. This stack gives the appearance of a single large switch for network management purposes. For this kind of connectivity, see the "Example 1: Cascaded Stack Connection" section.

Support for redundant loop configurations in a GigaStack GBIC stack

For more information, see the "Minimum IOS Release for Redundant Loop Configurations" section and the "Cascaded Stack Connections with a Redundant Link" section

Figure 1-1 shows the LED locations on the GigaStack GBIC, and Table 1-1 describes the LED colors and their meanings. 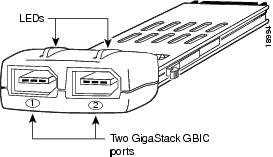 Figure 1-2 shows the GBIC module slot LED on the front of a supporting switch, and Figure 1-3 shows the GBIC LED location when the GigaStack GBIC is installed in the 1000BASE-X module.

The maximum distance for a GBIC-to-GBIC connection is 1 meter. The GigaStack GBIC requires Cisco proprietary signaling and cabling. For more information about cabling, see Appendix B, "Connectors and Cables."

The 50-cm cable comes with the GigaStack GBIC. You can order additional cables.

Do not use standard IEEE 1394 cables with the GigaStack GBIC. You must use one of the Cisco proprietary cables (CAB-GS-50CM or CAB-GS-1M). If you use any other cable, you will not have connectivity.

Do not use the GigaStack GBIC with standard IEEE 1394 equipment. You might damage the equipment or lose data.

Refer to the online GigaStack Gigabit Interface Converter Switch Compatibility Matrix listed with the GBIC documentation on www.cisco.com for the most current list of products supporting the GBIC.

Installing the GBIC in or connecting it to an unauthorized device might cause damage to the GBIC, the other device, or both.

Table 1-4 lists the switches and the module supporting the GigaStack GBIC.

To ensure support for redundant loop configurations when using the GigaStack GBIC in a cascaded stack configuration, make sure that every switch in the stack is running at least the minimum IOS Release listed in Table 1-5.

For more information, see the "Cascaded Stack Connections with a Redundant Link" section. For switch software upgrade information, refer to the release notes for your switch.

This section contains examples that use the GigaStack GBIC as a Gigabit uplink to aggregate traffic in a switched and shared network. 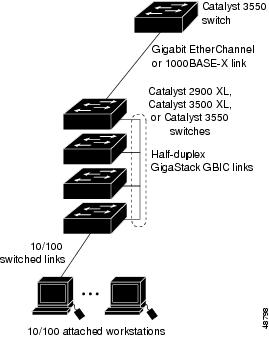