Virtual Machine Layout in Your Network

For additional information on systems with HA, see Redundancy in HA or MDC Deployments.

Different Types of Network Topology for Your System

This section describes the network topology when all the virtual machines in your system, including the Internet Reverse Proxy (IRP) virtual machine, are in the same internal network.

This configuration permits users to sign in and join meetings securely from the Internet without a VPN connection.

If you are using automatic deployment, then the ESXi hosts for all your virtual machines (including the IRP) must be managed from the same VMware vCenter. This vCenter information is required during an automatic system deployment.

This is a diagram of an all-internal IRP network topology.

Advantages of an All Internal IRP Network Topology

Compared with the non-split-horizon network topology, there are no virtual machines in the DMZ, and the network traffic for internal users is not connected through the DMZ to host or attend meetings.

Disadvantages of an All Internal IRP Network Topology

Public access (allowing external users to access the system) requires opening inbound ports (80 and 443) directly from the Internet to the internal network.

For more information about IRP, see Network Considerations for the Internet Reverse Proxy.

This section describes the network topology when you have a non-split-horizon DNS. The internal virtual machines (Admin, and if applicable, Media and Web) are in the internal network, and the Internet Reverse Proxy is in the DMZ network.

This is a schematic diagram of a non-split-horizon network topology.

Advantages of a Non-Split-Horizon Network Topology

Disadvantages of a Non-Split-Horizon Topology

This section describes the network topology when all the virtual machines in your system are in the same internal network. There is no public access; only internal and VPN users can host or join meetings.

You will define the Administration URL, the Webex Site URL and the private VIP address during the deployment of your system. For more information about these terms, and when you provide them, see the Installation section of the Cisco Webex Meetings Server Administration Guide.

This is a schematic diagram of an all internal network topology.

Advantages of an All Internal Network Topology

Disadvantages of an All Internal Network Topology

This section describes the network topology when you have a split-horizon DNS. The internal virtual machines (Admin, and if applicable, Media and Web) are in the internal network, and the Internet Reverse Proxy (IRP) is in the DMZ network.

This is a schematic diagram of a split-horizon network topology.

Split-horizon DNS with Public VIP NAT on the External Firewall

If you have public virtual IP (VIP) NAT configured on the external firewall, you need three DNS servers to deploy split-horizon DNS:

Advantages of a Split-Horizon Network Topology

Disadvantages of a Split-Horizon Topology

Redundancy in HA or MDC Deployments

The conditions for redundancy are:

In an HA system, the Public and Private VIP addresses are shared with primary system. When one virtual machine is down, the other virtual machine uses the same VIP addresses. Because of this behavior, a virtual machine failure is transparent to users. Meetings continue without placing unusual demands on the DNS infrastructure. However, a shared VIP address can only be implemented on a single network segment or VLAN. Splitting a VLAN across two data centers is not supported.

We require that connectivity between the primary and HA internal virtual machines be within the same data center. This requirement makes it easier to distinguish between a virtual machine failure and a network failure. A split network can cause split meeting connections and conflicting database updates.

In a MDC system, there are two sets of Public and Private VIP addresses. Data replicates across data centers (except for the License Manager). Therefore if a data center goes down or network connectivity is lost, the surviving data center continues to serve users independent of geographic location.

The best way to build a fault tolerant system is when most system components operate as “all active.” However, certain key components, notably the database service, are “active/standby." (Web servers and media components in the HA system are dependent on the primary system components.) Any latency or interruption on the connections results in delays for users, particularly when joining meetings. Latency between media service components increases audio and video latency for some users during meetings. For Cisco Webex Meetings Server, 4 ms of network latency is acceptable between the internal virtual machines.

The Internet Reverse Proxy virtual machine always connects to a single external VLAN regardless of the number or NICs you use. If you use multiple physical NICs, and they are connected to different switches or routers, the NICs must still be connected to the same VLAN.

Latency Between Internal Virtual Machines and the Internet Reverse Proxy

The maximum acceptable round-trip latency on the path between the NIC on the Internet Reverse Proxy and the NIC on any of the internal virtual machines should be established at less than 4 ms. Excess latency on this path will limit the bandwidth usable by end users for audio, video, and desktop sharing. If the latency increases from 4 ms to 8 ms, for instance, the usable bandwidth will drop by half, with the experience progressively degrading as the latency increases.

You may set up network traffic isolation between the Internet and your internal network by using a DMZ Ethernet switch. The following procedure and diagram illustrate one example:

Here is a diagram of a sample network topology: 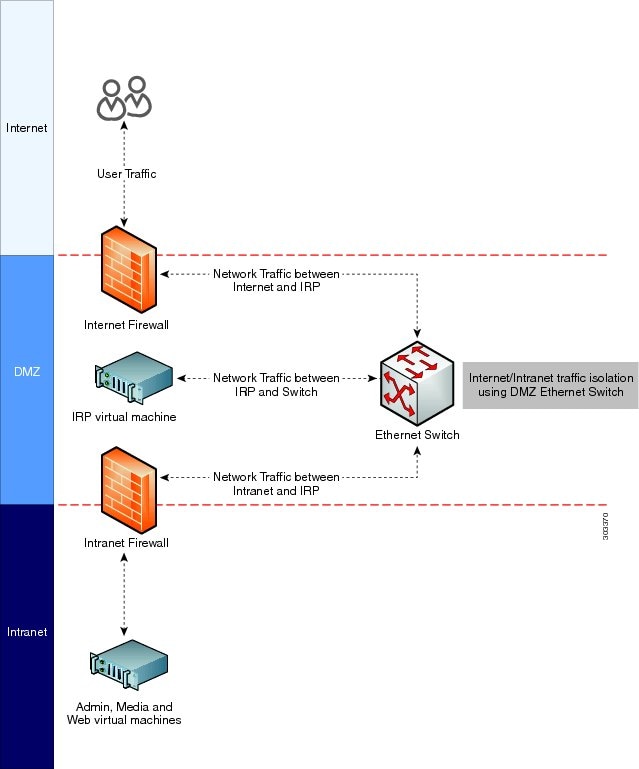 This section describes the bandwidth requirements for 50, 250, 800 and 2000 user systems. Meeting the bandwidth requirements outlined in the section will provide a quality end user experience for your users who host and attend Webex meetings, and helps ensure that your network can support the traffic demands from the web sharing, audio, and video.

The information in the following table shows the expected bandwidth for video, audio and web sharing.

If you refer to the Webex Network Bandwidth White Paper, you will notice that the bandwidth values in the preceding table are based on worst-case traffic conditions. Average bandwidth utilization is much smaller, but Cisco recommends using worst case numbers for the following reasons:

Use the following process to determine the necessary bandwidth on various network paths.

For direct interfaces between your switching architecture and your system, we recommend provisioning your interface NICs to the maximum speeds shown in the following table. These speeds apply to the connectivity between the Cisco UCS Servers and ports on head-end switches in your local switching infrastructure only. These are the recommended speeds needed to support worst-case traffic requirements.

See the next section, "Bandwidth Considerations for Split-Horizon DNS Deployments," for more information about using 1 Gb/s NICs and Ethernet switches for a split-horizon DNS deployment.

For example, if a company has 100 users who want to access a 2000 port user system from the Internet concurrently, you would need a bandwidth of 150 Mb/s (1.5 Mb/s aggregate user session bandwidth * 100 users = 150 Mb/s). This implies that a network infrastructure from the DMZ network to the Internet Reverse Proxy can be 1 Gb/s Ethernet switches, and the Ethernet NIC interface on the Internet Reverse Proxy can be 1 Gb/s, as opposed to the stated 10 Gb/s interface requirement. Even when you factor in that the Internet Reverse Proxy sees double the traffic (meaning its NIC would have to handle 300 Mb/s of user traffic), applying the 60 percent rule (explained in the "Bandwidth on Cisco Webex Meetings Server Network Interfaces" section) translates to 500 Mb/s. A 1 Gb/s link is still sufficient, but it would not be sufficient if we assumed 250 users instead of 100 users.

For non-split-horizon DNS deployments, you must deploy 10 Gb/s Ethernet switches and Ethernet NIC interfaces on the Internet Reverse Proxy.

Requirements for a network link between two data centers:

For example, a worst case a 2000 user system (maximum number of 1000 meetings are cascaded. Half of them can have Video, and half are without:

Additional information can be found at http://www.cisco.com/c/en/us/products/conferencing/webex-meeting-center/white-paper-listing.html.

Configuring NIC Teaming on your UCS Servers that contain the ESXi host with the internal virtual machines provides two advantages: NIC Teaming load balances the network traffic between physical and virtual networks, and provides failover in the event of a hardware failure or a network outage. In addition, for deployments where 10 Gb/s infrastructure is not available, it may be possible for you to team multiple 1 Gb/s NICs to achieve an equivalent result.

Assuming the use of traditional network interfaces and Ethernet switches, you can provide redundancy by using NIC teaming and duplicate switches, as outlined in the following process:

Load balancing is always done on CWMS no matter what type of traffic is being handled and it is not configurable.

The system attempts to balance the load equally on all web nodes. When the deployment is a system without High Availability (HA), connections are balanced among all web nodes on that system. In the case of a HA deployment, the system uses the web nodes on both the primary system and the HA system for load balancing. In the event of a failure of one, but not all web nodes, the system remains active, but capacity is reduced.

The Internet Reverse Proxy (IRP) node is an entry point and most load balancing decisions are made there. Only one IRP node is active on a system. A system without HA deployment has only one IRP node. A system with HA deployment has two IRP nodes, one IRP is active while the other is inactive. Depending on the DNS configuration, IRP serves all external traffic (and all internal traffic in case of non-split DNS).

If there is a failure involving multiple hosts, functionality and capacity might be affected.