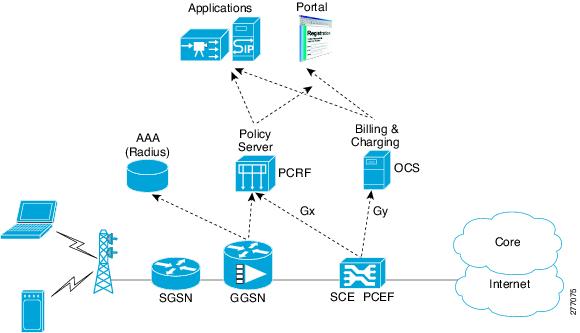 The Gx interface is used to connect between the Policy and Charging Rules Function (PCRF) server and the Service Control Engine (SCE). Subscriber parameters, both SCE-specific (for example, package ID), and non-SCE-specific parameters, known as RADIUS Vendor Specific Attributes (VSAs), can be configured to the SCE through the Gx interface. The subscriber parameter update can be triggered both by SCE events, such as login and logout, and by PCRF external events.

For example, consider a base station to VIP mapping. Radio Frequency (RF) planning assesses the capacity of each base station in terms of coverage, capacity, and bandwidth. The base station characteristics are derived from the geographical area type (urban, suburban, rural), available spectrum, interferences, link budget, and so on. In this example, several types of base stations are mapped to VIPs using an index for uplink and downlink traffic control. The VIP traffic control rules are defined in terms of Peak Information Rate (PIR) for uplink and downlink traffic. Table 1-1 lists the VIP index and PIR for each base station type.

You can use templates to define VIP control rules for base stations with similar capacity, as well as change PIR values during peak hour.s

Similarly, Cisco Service Control enables you to define different service plans for subscribers corresponding to bandwidth allowance (such as 2 Mbps down and 512 kbps up), time/volume allowance, and applications allowance (VoIP, VoD, P2P). You can also associate traffic control rules to these service plans, which are enforced on a per user basis.

The mapping of subscriber to IP address and to VIP can be easily achieved. Because, the base station identification is signaled over the control plane towards the Access Gateway (ASN-GW, GGSN), subscriber management entities (AAA, Policy Manager), and Service Control element. You can also be change this mapping dynamically using a policy control layer based on a defined trigger (such as mobility or time of the day). 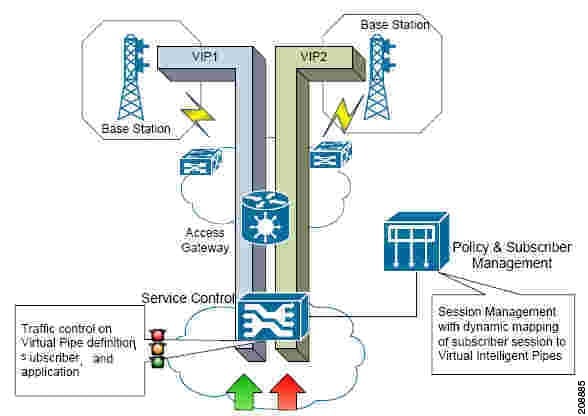 Subscriber traffic data is captured by Cisco SCE and appended to the RDRs which is used to generate cell-aware reports.

The following information is sent to the Cisco Service Control Collection Manager in RDRs and used to generate cell congestion reports: