When using the CLI there are two important concepts that you must understand to navigate:

Authorization Level—Indicates the level of commands you can execute. A user with a simple authorization level can only view some information in the system, while a higher level administrator can actually make changes to configuration.

Command Hierarchy Level—Provides you with a context for initiating commands. Commands are broken down into categories and you can only execute each command within the context of its category. For example, to configure parameters related to the Line Card, you need to be within the Linecard Interface Configuration Mode. CLI Command Mode Hierarchy

The following sections describe the available Authorization and Command Hierarchy Levels and how to maneuver within them.

The on-screen prompt indicates both your authorization level and your command hierarchy level, as well as the assigned host name.

Throughout the manual, SCE is used as the sample host name.

The following CLI commands are related to authorization levels:

Each authorization level has a value (number) corresponding to it. When using the CLI commands, use the values, not the name of the level, as shown in Table 2-1.

The set of all CLI commands is grouped in hierarchical order, according to the type of the commands. The first two levels in the hierarchy are the User Exec and Privileged Exec modes. These are non-configuration modes in which the set of available commands enables the monitoring of the SCE platform, file system operations, and other operations that cannot alter the configuration of the SCE platform.

The list of available commands in each mode can be viewed using the question mark `?' at the end of the prompt.

Figure 2-1 illustrates the hierarchical structure of the CLI modes, and the CLI commands used to enter and exit a mode. 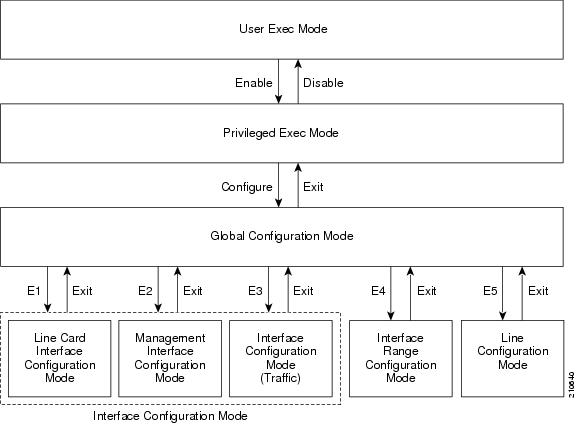 The following commands are used to enter the different configure interface modes and the Line Configuration Mode:

Although the system supports up to five concurrent Telnet connections, you cannot configure them separately. This means that any number you enter in the line vty command (0, 1, 2, 3 or 4 ) will act as a 0 and configure all five connections together.

This example illustrates moving into and out of configuration modes as follows:

Configure the speed of the management interface

The on-screen prompt indicates your authorization level, your command hierarchy level, and the assigned host name. The structure of the prompt is:

Authorization levels are indicated as shown in Table 2-3.


Command hierarchy levels are indicated as shown in Table 2-4.

The prompt SCE1(config if)# indicates:

The name of the SCE platform is SCE1

The user has Admin authorization level

From this command mode, the following Interface Command Modes can be accessed:

Table 2-5 summarizes how to navigate the CLI command hierarchy.

The following commands are used to configure the management port:

The "do" Command: Executing Commands Without Exiting

When you are in either the global configuration mode or any of the interface configuration modes, it is possible to execute an EXEC mode command (such as a show command) or a privileged EXEC (such as show running-config) without exiting to the relevant command mode. Use the do command for this purpose.

The specified command executes without exiting to the appropriate exec command mode.

To obtain a list of commands that begin with a particular character string, enter the abbreviated command entry immediately followed by a question mark (?). This form of help is called partial help, because it lists only the keywords or arguments that begin with the abbreviation you entered.

The following example illustrates how typing c? displays all available arguments that start with the letter c.

To obtain a list of keywords or parameters associated with a command, type a question mark (?) in place of a keyword or parameter on the command line.

Note that if <Enter> is acceptable input, the symbol <cr> represents the Enter key.

The following example illustrates how to get a list of all arguments or keywords expected after the command snmp-server.

When asking for help on particular parameter, the system informs you of the type of data that is an accepted legal value. The types of parameters supported are:

The following example illustrates the use of ? to get help on commands syntax. In this example, you can enter either the word running-config, or any name of a file, after the word copy.

CLI maintains a history buffer of the most recent commands you used in the current CLI session for quick retrieval. Using the keyboard, you can navigate through your last commands, one by one, or all commands that start with a given prefix. By default, the system saves the last 30 commands you typed. You can change the number of commands remembered using the history size command.

To use the history functions, use the keys shown in Table 2-7.

You can get a display the keyboard shortcuts at any time by typing help bindings.

The CLI interface features tab completion. When you type in the first letters of a command and press <Tab>, the system automatically fills in the rest of the command or keyword. This feature works only when there is one command that could be possible using the starting letters.

The letters snm followed by <Tab> will be completed to the command snmp-server.

If you press <Enter> instead of <Tab>, and there is no ambiguity, the system actually carries out the command that is the result of the auto-completion.

The following example displays how the system completes a partial (unique) command for the enable command. The system carries out the command using the default authorization level (10) when you press <Enter>.

The following example illustrates how to use the completion feature with a non-default value for the argument. In this example, the enable command is completed using the specified value (15) for the authorization level.

CLI enables saving FTP user name and password to be used in FTP operations—download and upload, per session.

These settings are effective during the current CLI session.

The following example illustrates how to set FTP password and user name and the use in these settings for getting a file named config.tmp from a remote station using FTP protocol.

Redirecting Command Output to a File

Some commands, such as many show commands, may have many lines of output. There are several ways of managing the command output:

Scrolling options—When the command output is too large to be displayed all at once, you can control whether the display scrolls line by line or refreshes the entire screen.

Filtering options—You can filter the output so that output lines are displayed only if they include or exclude a specified expression.

Redirecting to a file—You can send the output to a specified file.

Note that by default, the show commands act the same as the more commands; that is, the output is displayed interactively a single screen at a time. Use the no more command to disable this feature so that show commands display the complete output all at one time.

The output of some show and dir commands is quite lengthy and cannot all be displayed on the screen at one time. Commands with many lines of output are displayed in chunks of 24 lines. You can choose to scroll the display line by line or refresh the entire screen. At the prompt after any line, you can type one of the following keys for the desired action:

Any other key—Quit showing the file

You can filter the output of certain commands, such as show, more, and dir, so that output lines are displayed only if they include or exclude a specified expression. The filtering options are as follows:

include — Shows all lines that include the specified text.

exclude — Does not show any lines that include the specified text.

begin — Finds the first line that includes the specified text, and shows all lines starting from that line. All previous lines are excluded.

The syntax of filtered commands is as follows:

Following is an example of how to filter the show version command to display only the last part of the output, beginning with the version information.

Redirecting Command Output to a File

You can redirect the output of commands, such as show, more, and dir, to a file. When writing the output of these commands to a file, you can specify either of the following options:

redirect—The new output of the command will overwrite the existing contents of the file.

append—The new output of the command will be appended to the existing contents of the file.

The syntax of redirection commands is as follows:

This example illustrates how to do the following:

Filter the more command to display only the gold package subscribers from a csv subscriber file.

Redirect that output to a file named current_gold_subscribers. The output should not overwrite existing entries in the file, but should be appended to the end of the file.

The CLI scripts feature allows you to record several CLI commands together as a script and play it back. This is useful for saving repeatable sequence of commands, such as software upgrade. For example, if you are configuring a group of SCE platforms and you want to run the same configuration commands on each platform, you could create a script on one platform and run it on all the other SCE platforms. The available script commands are:

Perform the actions you want to be included in the script.

The system saves the script.

The following is an example of recording a script for upgrading software.