This module describes topics that are related to using the Subscriber Manager (SM) together with clusters and redundancy.

As the Subscriber Manager plays a critical role in the Cisco Service Control Application for Broadband (SCA BB) solution that is deployed in tier-one service provider environments, it also supports, starting with SM version 2.2, a fail-over operational mode. This feature minimizes system downtime that is caused by SM failure (as further discussed in Information About Subscriber Manager Fail-Over).

This section introduces various concepts that are related to using a cluster of two SM nodes in a fail-over operational mode.

For the purposes of this section, it is assumed that the reader is familiar with the Veritas Cluster technology.

The fail-over scheme that is implemented in the SM is based on the Veritas cluster technology. The cluster includes two machines, each of them running SM TimesTen and Veritas software. The Veritas Cluster Server (VCS) software consolidates the SMs and exposes a single entity by providing a single virtual IP address for the entire cluster.

When a fail-over occurs, the login event generators (LEGs) lose their connection with the failed SM, and reconnect to the activated (backup) SM and retransmit their uncommitted messages. The activated SM connects to the service control engine (SCE) platforms and performs an SCE resynchronization.

The TimesTen database replication agent constantly replicates the SM database from the active node to the standby node. This enables a fast fail-over from one SM to another, since the subscriber data in the activated machine is always valid. The two SM nodes do not communicate except for passing the subscriber data.

The VCS uses software components called "cluster agents" to monitor and control the state of resources such as Network Interface Cards (NICs), disks, IP addresses, and processes. Cisco supplies cluster agents to monitor the SM and the TimesTen database daemon and replication agent.

The following sections describe these concepts in further detail.

During the normal operation of the cluster, the active node (selected by the cluster):

Performs all SM functionality of a non-cluster environment

Periodically replicates its subscriber database to the standby node

On the standby node, both the SM and the TimesTen software are running:

The SM connects to the TimesTen database, but does not connect to the LEG and the SCE devices.

The following figure depicts an SM cluster configuration in a topology with a redundant AAA server and two SCE 2000 platforms that are cascaded for redundancy. 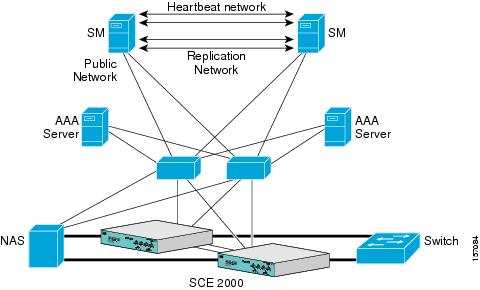 Heartbeat network—Used by the Veritas Cluster Server to perform cluster monitoring and control.

Replication network—Used by the replication process to pass the subscriber records.

The two nodes should be located in the same site, where the heartbeat network is implemented using back-to-back connectivity between the two nodes or via redundant switches. Each node in the cluster has redundant network paths (NICs) connecting it to all of the external entities with which the SM communicates (AAA, LEG, SCE).

Each node in the cluster has a minimum of six Ethernet NICs, where:

Two NICs are used for the (private) heartbeat network

Two NICs are used for the (private) replication network

Two NICs are used for the public network (connectivity to SCEs and LEGs, and management of the SM)

The following diagram illustrates the usage of the regular and virtual IP addresses used in cluster configuration:

The cluster IP address for external clients over the public network uses VIP1.

During normal operation, the Veritas Cluster Server mechanism automatically selects one of the SM servers to be active and the other to be standby.

The active SM server performs all the normal SM functionality. The two servers maintain the heartbeat mechanism between them, and the active server continuously replicates the subscriber database to the standby server's database.

The standby SM server acts as a hot-standby machine, so it is completely ready for taking over (becoming activated) in a minimal fail-over time.

The following types of failures trigger the fail-over mechanism:

SM application failure, including failure of the TimesTen database.

SUN server failure, due to failure of one of the resources of the server; for example, failure of both of the public network NICs.

Communication failure does not cause a fail-over if there is a redundant NIC. Therefore, because each SUN machine has two NICs for connecting to external devices, a failure of one of the NICs merely causes switching to the redundant NIC, without activating the fail-over mechanism.

After detecting a failure, the standby SM becomes activated, and the following occurs:

The activated SM takes over the IP resources of the virtual IP mechanism.

The LEGs reconnect to the activated SM.

The activated SM creates IP connections with the SCEs and resynchronizes with them.

The activated SM starts processing information that is sent from the different LEGs and forwards it to the SCEs.

Different types of failures require different triggering for the recovery procedure. Some failures may recover automatically such as intra-node ports link-failure, which recovers automatically when the link revives, while others may need manual intervention.

The failed SM server is recovered manually or automatically, according to the type of failure that occurred. The recovery procedures, and when they are used, are described in the following sections.

Recovering from a machine reboot is a fully automatic recovery process, where the failed SM server reboots, and after establishing a connection with the other server and synchronizing the databases, the cluster of the two SM servers is ready again for fail-over operation.

The steps in this procedure are automatic.

The reboot process is run on the node.

The TimesTen database replication process is started from the point before the reboot.

The SM in the recovered server is ready after the database recovery process is running and the SM moves from Init state to Standby state.

Replacing the server is necessary when the machine has an unrecoverable physical failure. A new machine that is installed with fresh SM, TimesTen, and VCS installations replaces the server.

Replacing the server is a manual recovery, where the failed SM server is physically replaced. After connecting the new SM server to the network, configuring it and synchronizing the two databases, the cluster of the two SM servers is ready again for fail-over operation.

Connect a new server to the inter-node ports and intra-node ports (but leave the network ports disconnected).

Copy the configuration files from the active node.

Use the following CLU command if you need to copy only the p3sm.cfg file:

Start the VCS operation on the recovered node.

The SM in the recovered server is ready after the database recovery process is completed and the SM moves from Init state to Standby state.

Stop the cluster server (VCS) monitoring of the resources.

Use the VCS CLU hastop -local command to stop the VCS.

Stop the SM, so it will not be affected by clearing the database.

Use the CLU command p3sm --stop.

Duplicate the remote database to the local machine.

Use the CLU command p3db --duplicate.

Start the cluster server monitoring of the resources.

Use the VCS CLU hastart command, which will automatically start the replication process and the SM.

The two SM servers are configured using Command-Line Utilities and a configuration file (see Configuration and Management and How to Configure a Subscriber Management Solution). The actual configuration is performed for the active SM and then manually replicated for the standby SM.

Establish an FTP connection between the active and standby machines.

Manually copy the database-related configuration files to the required location.

If you have made changes in the database-related configuration files, copy the files to /etc/system (for Solaris) or to /etc/sysctl.conf (for Linux), and /var/TimesTen/sys.odbc.ini from the active node to the standby node.

If you perform this step, a reboot of the standby node is required.

If the database is located in different directories in the two nodes, then the files sys.odbc.ini in both nodes are not identical and the actual parameter changed in the file must be copied.