The Cisco uBR7200 series universal broadband routers contains some or all of the following:

A midplane that serves as the interconnect between the cable interface line cards and the other components of the system. See the "Subchassis and Midplane" section.

The Cisco uBR7225VXR universal broadband router may be installed on a tabletop or rack-mounted. A rack-mount kit ships with each router. The rack-mount kit includes the hardware needed to mount the router in a standard 19-inch equipment rack or telco-type rack.

Online insertion and removal (OIR), allowing key system components to be added or removed without powering off the chassis.

The NPE does not support OIR. You must power down the chassis before removing the NPE.

For specific instructions to install, remove, or replace system components, refer to the documentation at the following URL:

The Cisco uBR7225VXR router chassis has:

One slot for a network processing engine

The rear of the Cisco uBR7225VXR provides access to the network processing engine and up to two power supplies. See Figure 1-2.

A fully configured Cisco uBR7225VXR router can operate with only one installed power supply; however, a second, optional power supply of the same type provides hot-swappable, load-sharing, and redundant power. In a chassis using two power supplies, if one power supply fails or is removed, the redundant power supply immediately takes over the router's power requirements and maintains normal operation without interruption.

The power supply has the router's main power switch and an AC-input power receptacle. Mounting holes for a ground lug are located on the far right side on the rear of the chassis, to provide a chassis ground connection for ESD-preventive equipment. See Figure 3-13.

If you are using two power supplies, make sure that each one is plugged into a separate branch circuit.

In the Cisco uBR7200 series universal broadband routers, the slot number is the chassis slot in which a cable interface card is installed.

All LAN interfaces (ports) require unique MAC-layer addresses, also known as hardware addresses. Typically, the MAC address of an interface is stored on a memory component that resides directly on the interface circuitry; however, the OIR feature requires a different method. For a description of OIR, refer to the "Online Insertion and Removal" section.

The MAC addresses are assigned to the slots in sequence. This address scheme allows you to remove cable interface cards and insert them into other universal broadband routers without causing the MAC addresses to move around the network or be assigned to multiple devices.

Storing the MAC addresses for every slot in one central location means that the addresses stay with the memory device on which they are stored.

For information on the commands used to configure your Cisco uBR7225VXR router, refer to the Cisco IOS Configuration Fundamentals Configuration Guide at the following URL:

The Cisco uBR7200 series universal broadband routers is installed at a cable television headend or a distribution hub. Related networking and RF equipment, servers, and other host computers are installed, along with the Cisco uBR7225VXR router, to support digital data transmission.

To deliver data and VoIP services over the cable television system, TV channels are allocated to carry digital data. Data is modulated downstream on:

6-MHz channels in the 88 to 860 MHz range, using North American channel plans through Cisco cable interface line cards installed in the chassis. For bidirectional cable plants, a portion of the 5 to 42 MHz range is used for upstream data transmission. For one-way cable plants or cable segments yet to be upgraded, DOCSIS-based cable interfaces configured for telco return are also supported.

8-MHz channels in the 108 to 862 MHz range using PAL/SECAM channel plans through Cisco cable interface line cards installed in the chassis. For bidirectional cable plants, a portion of the spectrum in the 5 to 65 MHz range is used for upstream data transmission.

6-MHz channels in the 70 to 860 MHz range, using J-DOCSIS channel operation (extensions for Japan and select regions) through Cisco cable interface line cards installed in the chassis. For bidirectional cable plants, a portion of the 5 to 55 MHz range is used for upstream data transmission.

The following sections illustrate the supported configurations including:

Receivers, scramblers, and descramblers process the television signals to encode or decode signals as needed for broadcast. Modulators format the analog television and digital signals while upconverters change the carrier frequency of a modulated signal to a specified frequency. The analog TV channels and digitally modulated carriers then pass through the RF combiner.

The signals are broadcast from the headend through optical transmitters typically to fiber nodes in the network. Amplifiers, coaxial cable, and taps carry the signals to the subscriber premises. Signals are processed as follows:

Two-way cable interfaces transmit RF signals back through amplifiers to optical fiber receivers at the headend. These receivers pass the upstream signal to the upstream ports on the Cisco uBR7225VXR router for processing.

Telco return cable interfaces transmit over the PSTN. Dial-up servers and other equipment handle the upstream traffic and pass appropriate data to the Cisco uBR7225VXR routers. For telco return specifics, refer to the "Telco Return" section. 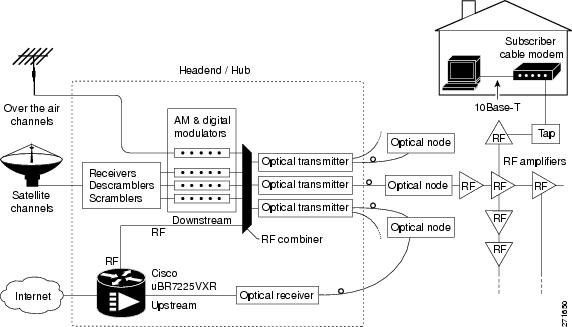 For more information on CSRC and CNR involvement in the cable network, refer to the CSRC and CNR documentation.

The Cisco uBR7225VXR router supports VPN services. Figure 1-5 shows a typical VPN architecture. VPNs can be initiated at a cable modem residing at a subscriber site or can be initiated by the CMTS at the headend or distribution hub depending upon your particular Cisco IOS software image. 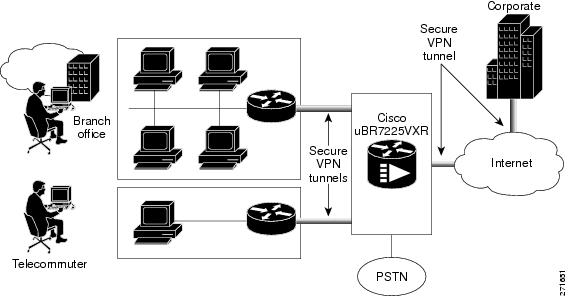 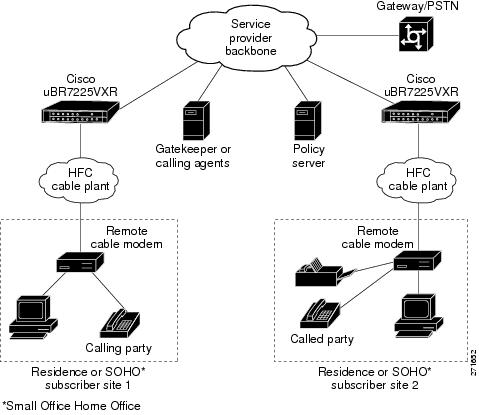 In telco return configurations, the Cisco uBR7225VXR universal broadband router provides downstream data flow from cable interface line cards connected to the cable system and accepts upstream traffic via a combination of the local PSTN and IP network path that terminates at the Cisco uBR7225VXR router. Upstream data transmission takes place over a telephone modem (external or internal to a cable interface, as well as a cable interface line card in a PC, based on the third-party cable interface vendor) connected to an analog telephone line. Figure 1-7 illustrates a telco return configuration. 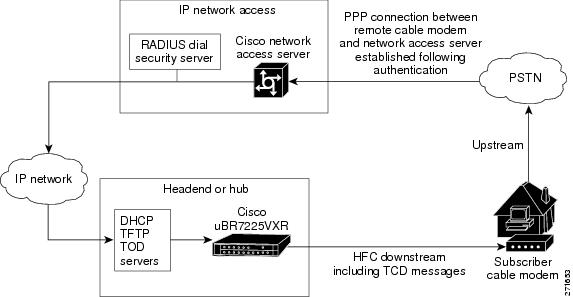 FRU documentation (instructions on installing, removing, and replacing) is located at the following URL:

The following components are described:

Accounting and switching of data traffic

Refer to Network Processing Engine and Network Services Engine Installation and Configuration, for specifications, and removal and replacement instructions for these components. View the document online at the following URL:

To prevent system errors and problems, use the CPU reset button only at the direction of your service representative.

Cisco uBR7200-NPE-G2—SDRAM: 1 GB (default) and 2 GB. There are two DRAM memory slots, so 1 GB of memory consists of two 512-MB memory SODIMMs, and 2 GB consists of two 1 GB memory SODIMMs. It is necessary to have the same size SODIMM in each memory bank on an NPE-G2. The type of DRAM memory being used on the NPE-G2 is double data-rate (DDR) memory. DDR memory provides high-performance memory access rates.

Two environmental sensors for monitoring the cooling air as it leaves the chassis.


For memory replacement instructions, refer to the Memory Replacement Instructions for the Network Processing Engine or Network Services Engine and Input/Output Controller document at the following URL:

The Cisco uBR7225VXR router is equipped with one of the following power supplies:

Ensure that you do not use a combination of these power supplies in the Cisco uBR7225VXR router.

This document is available on Cisco.com at the following URL: 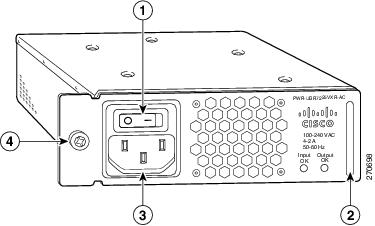 The fan tray for the Cisco uBR7225VXR router, shown in Figure 1-9, consisting of three fans that are attached to a metal tray, is located on the left side of the chassis (when viewing the router from the front) and receives 12 VDC through a DC power harness that connects directly to the router midplane.

The Cisco uBR7225VXR router fan tray is not a field-replaceable unit.

The left and right sides of the chassis must remain unobstructed to ensure adequate airflow and prevent overheating inside the chassis; we recommend at least 3 inches of clearance. (See the "Site Requirements" section.) 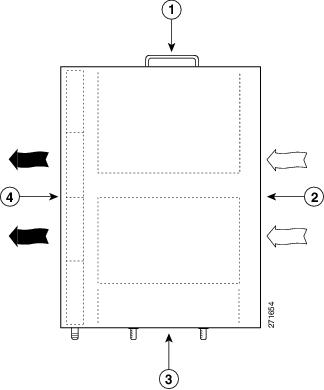 The front of the chassis has two slots for cable interface line cards and one bay for the subchassis. See Figure 1-11. 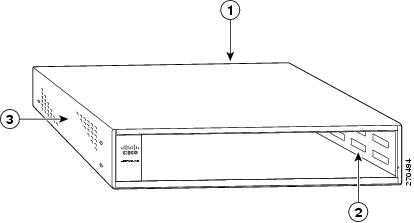 The subchassis and midplane provide these functions for the Cisco uBR7225VXR router:

Distributes power from the power supply.

Arbitrates traffic across the PCI buses.

The subchassis (the rear of the router) has two bays for power supplies and one slot for a network processing engine. (See Figure 1-12.) The cable interface card side of the Cisco uBR7225VXR router midplane has two connectors for cable interface line cards.

The power supply side of the midplane has two connectors for power supplies and one connector for a network processing engine. The midplane supplies DC power to the router's internal components. 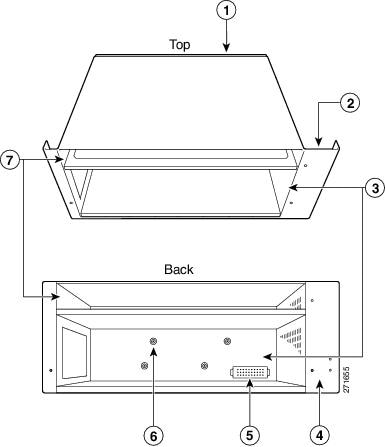 The Cisco uBR7225VXR universal broadband router has one CompactFlash Disk slot that uses CompactFlash Disks. The device in this slot is always addressed as disk2: when using Cisco IOS command-line interface (CLI) commands.

The CompactFlash Disk has controller circuitry that allows it to emulate a hard disk and automatically maps out bad blocks and performs automatic block erasure. The CompactFlash Disk also provides the capability to allocate noncontiguous sectors, which eliminates the need for the squeeze command (which was required with older-style linear flash memory cards to recover the space used by deleted files).

The CompactFlash Disk also supports the Cisco IOS File System feature, which provides a single interface to all of the router's file systems, including the Flash Disks and flash memory, as well as network file systems such as File Transfer Protocol (FTP) and Trivial FTP (TFTP) servers.