It includes the following topics:

Be sure that the following requirements are met before you upgrade your server:

Your current CIMC/BIOS firmware version is a minimum of 1.4(2).

You have installed Cisco StadiumVision Director Release 3.0 on your Platform 2 servers.

A monitor and keyboard are connected to the Cisco StadiumVision Director server.

You can log into the server with a SNETAC account at the console or over the network with SSH.

Installing the Hard Drives Into the Server Chassis (required)

Installing the Hard Drives Into the Server Chassis

To install the hard drives into the server chassis, complete the following steps:

Log into the Cisco StadiumVision Director server with the "installer" credentials either directly at the console or over the network using SSH.

Unless the values have been changeed, the default userid is "installer" with password "cisco!123."

When the StadiumVision Director Configuration menu for the Text Utility Interface (TUI) appears, type m and press Enter to shut down the server.

Amessage appears asking you to confirm the shutdown.

The server begins to shut down and a series of messages are displayed:

If the server reboots instead of powers down it is probably running an older firmware. For more information, see the "Upgrading the CIMC and BIOS Firmware on a Cisco StadiumVision Director Platform 2 Server".

Install the new 300 GB hard drives into Slot 2 and Slot 3 of the server chassis.

For information about physically installing the hard drives on the Platform 2 server, see the "Maintaining the Server" chapter of the Cisco UCS C200 Installation and Service Guide.

This task creates another RAID 1 logical volume composed of the two new drives.

For more information about RAID on the Cisco StadiumVision Director Platform 2 server, such as the meaning of the beep codes, see the "RAID Controller Considerations" chapter of the Cisco UCS C200 Installation and Service Guide.

It is recommended that you have a mouse or other similar device attached to the sever so that you can perform the installation steps more easily.

Power on the Cisco StadiumVision Director server where you physically installed the two new hard drives.

Press Ctrl-H to open the LSI MegaRAID utility when prompted.

Be sure to press Ctrl-H when prompted by the LSI MegaRAID utility. If you miss the prompt or reach the boot menu before seeing it, press Ctrl-Alt-Del to reboot the server and try again.

Create a new logical volume with the two new drives in a RAID 1 configuration by completing the following steps:

Only drives in "Unconfigured Good" state are available for RAID configuration. New drives must show up as unconfigured before you proceed.

Select Automatic configuration with the Redundancy when possible option. Click Next.

The Logical View screen shows the 4 hard drives online, including the two new drives in Slot 2 and Slot 3.

Extending the Original RAID Volume to Create a Single Group

Be sure that the following requirements are met before you can login to the server with an authenticated account:

A Cisco representative has obtained a secure token from an internal credential server for the Cisco StadiumVision Director server to be upgraded.

If the token is being copied and saved for later use in authenticating with the Cisco StadiumVision Server, it must be saved exactly as given in plain text. Anything that adds invisible characters, such as RTF format, will make the copied token invalid for use.

The authentication token must be pasted into Cisco StadiumVision Director when the Cisco representative logs in with the SNE TAC account and establishes a new temporary user account with privileges to perform system tasks. The account will be usable for 90 days.

To extend the original RAID volume to create a single group, complete the following steps:

Mount the new volume using the following command, where "sdb" is where the Linux system references the new RAID disks if you used the standard server configuration steps:

Display the Free PE / Size on the volume:

The Free PE value will be used to extend the volume size in the next step. 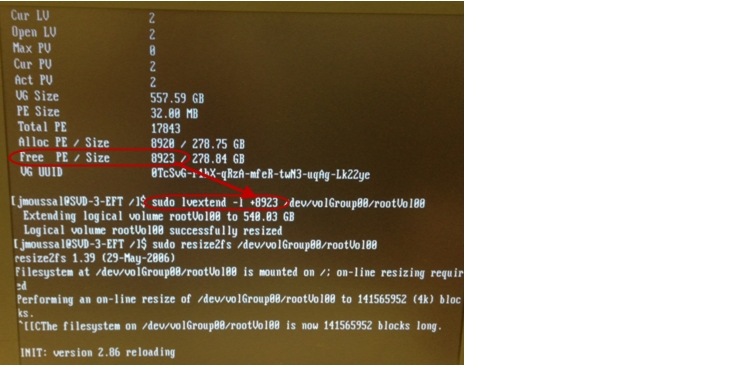 Extend the existing volume by the amount of the Free PE size value seen in the output of the vgdisplay command. In this example, the value is "8923":

This step will take some time to complete.

After completion, verify that the extra "free PE / Size" is now available to the filesystem using the following command: