This document explains how to configure the History and the History table in RMON on SFE/SGE Managed Switches. 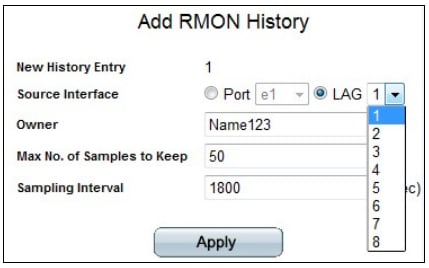 Step 4. Click the desired type of interface radio button from where the history samples are to be taken and choose the interface from the drop-down list:

• Port — Choose the desired ethernet or gigabit ports. In this option statistics for a single port are received.

Step 5. Enter the RMON station device user that requested the RMON information in the Owner field.

Step 6. Enter the number of samples to store in the Max No. of Samples to Keep field. The default value is 50.

Step 7. Enter the time in seconds that samples are collected from the ports in the Sampling Interval field. The range is 1-3600 seconds.

Step 8. Click Apply to save. The entry is added to the History Control Table on the History page and the running configuration file is updated.

The following fields are displayed:

• Sample No. —  Statistics which were taken from this sample.

• Drop Events — The dropped packets due to lack of network resources during the sampling interval.

• Broadcast Packets — The good broadcast packets received. This number does not include Multicast packets.

• CRC Align Errors — The CRC and Align errors that have occurred.

• Fragments — The fragments (packets with less than 64 octets) received, excluding framing bits, but including FCS octets.

• Jabbers — this field displays the total number of received packets that were longer than 2000 octets. This number excludes frame bits, but included FCS octets that had either a bad Frame Check Sequence (FCS) with an integral number of octets (FCS Error) or a bad FCS with a non-integral octet (Alignment Error) number.

• Collisions — The collisions received on the interface.

• Utilization —The percentage of current interface traffic compared to maximum traffic that the interface can handle.