QoS queue in the network device enables the device to handle outgoing traffic from its interface effectively. The switch supports four queues for each interface. Queue number four is the highest priority queue whereas queue number one is the lowest priority queue. Strict Priority and Weighted Round Robin (WRR) are selected from the respective queues to enable both of the scheduling methods.

Step 1. Log in to the web configuration utility to choose Quality Of Service > General > Queue. The Queue page opens: 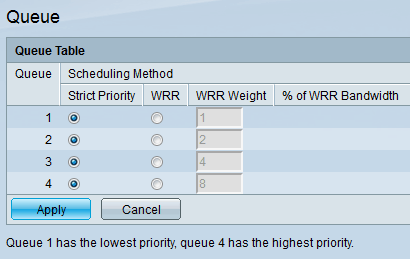 The below are the parameters and the explanations:

• Queue — Each interface on this switch has four Queues. Queues range from 1 to 4.

• Scheduling Methods — Strict Priority and WRR are the two methods by which traffic in the queue can be scheduled. 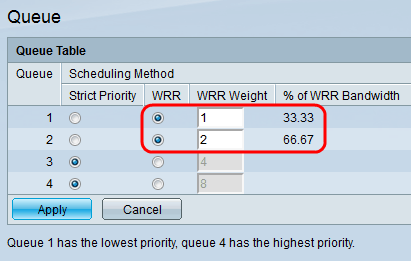 Step 2. For each queue, click a particular scheduling method. The possible options are:

• WRR — In this case traffic from the queues is to be sent in proportion to the weight of the queue. This means that more packets are sent from a queue with a higher weight. Queues are serviced until their quota has been used up and then another queue is serviced.

– % of WRR Bandwidth — The amount of bandwidth available to each queue is displayed in percentage.