This document provides the configuration and troubleshooting steps applicable to the creation of Layer 3 interfaces. VLANs divide broadcast domains in a LAN environment. Whenever hosts in one VLAN need to communicate with hosts in another VLAN, the traffic must be routed between them. This is known as inter-VLAN routing. On Catalyst switches it is accomplished by the creation of Layer 3 interfaces (switch virtual interfaces (SVIs) ).

Catalyst switch models 3560, 3750, Catalyst 4500/4000 Series with Sup II+ or later, or Catalyst 6500/6000 Series that run Cisco IOS system software support basic InterVLAN routing features in all their supported software versions. Before you attempt this configuration on a 3550 series switch, ensure that you meet these prerequisites:

The information in this document is based on a Catalyst 3550-48 that runs Cisco IOS Software Release 12.2(44)SE6 EMI.

This logical diagram explains a simple interVLAN routing scenario. The scenario can be expanded to include a multi-switch environment if you first configure and test inter-switch connectivity across the network before you configure the routing capability. For such a scenario that uses a Catalyst 3550, refer to Configuring InterVLAN Routing with Catalyst 3550 Series Switches. 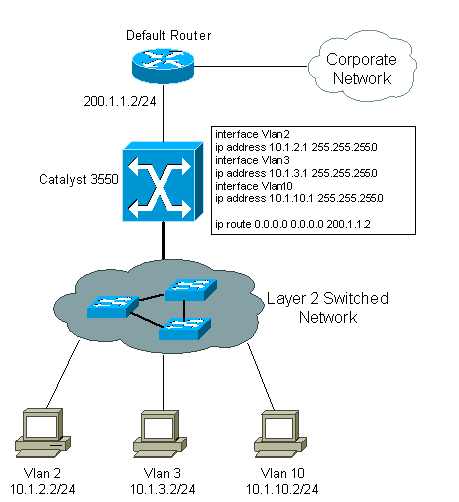 Complete these steps in order to configure a switch to perform interVLAN routing.

This video on the Cisco Support Community demonstrates how to configure the InterVLAN routing on Catalyst 3550 Series Switch:

VIDEO: How To Configure InterVLAN Routing On Layer 3 Switches

This section provides information in order to confirm that your configuration works properly.

This section provides the information used in order to troubleshoot your configuration.

There is no set recommended value of bandwidth on a VLAN interface (SVI). The default is BW 1000000 Kbit (1 Gigabit), because the route processor internal inband is only 1 Gigabit by design. The bandwidth parameter on the show interface vlan output is not fixed bandwidth used by SVI as traffic is routed on the switch backplane. The bandwidth number can be used in order to manipulate routing metrics, calculate interface load statistics, and so forth.

The Catalyst 6500 switch platform mostly forwards traffic in hardware with the exception of control/special traffic, for example, SNMP, Telnet, SSH, Routing protocols, and ARP, which has to be processed by the Supervisor, which is done in the software.