The power of Cisco DNA Center in industrial automation networks

Industrial automation systems have fully adopted standard networking technologies and rely on them for the bulk of their communications. These networks must have the scale, flexibility, performance, and resiliency needed for these critical systems. This connectivity is the foundation for the industrial IoT and Industry 4.0 evolution – connecting sensors, actuators, and control systems to the machine-learning, digitization innovations in the cloud. IT/OT convergence in networking and security technology is not just established but critical to a wave of optimizations and improvements in the ecosystem.

Oddly, the network management and tools are still far from converged. Operational Technology (OT) personnel do not have the same access to, and benefit of the network and security management tools used by IT. Yet they still need to rely on the network to operate the production environment, often without tools that tell them how the network is performing and the ability to maintain that network. If a link fails or a device connects improperly, it takes a sleuth to identify and resolve the problem. Key challenges facing OT personnel include:

●      Lack of visibility into network status and events that impact production

●      No effective means to update network infrastructure after initial deployment

Meanwhile, in the IT ecosystem, network management is going through a “software-defined” evolution to help IT organizations operate and maintain networks with less operational effort, more automation, and the benefit of machine learning to give assurance that the network is doing its job. Cisco DNA Center is a software-defined network controller for enterprise networks. The solution described here applies Cisco DNA Center to industrial automation networks and, alongside IT, gives OT a curated view and set of functions to perform key network maintenance tasks, consistently and scalably. It’s a first step in the evolution to a fully software-defined network such as Cisco Software-Defined Access. Key benefits of integrating Cisco DNA Center into production networks include:

●      Lowered costs: Automate and scale time-consuming activities such as configuration and updates to network infrastructure

●      Increased security: Enhance the visibility of assets and interactions; segment the network by defining and applying access policies

●      Simplified management: Operate the industrial network (wired and wireless) with views and functions for both IT and OT roles

●      Transformed network: Benefit from cloud-based AI/ML to optimize network operations and as a platform for extensibility

The following sections provide an overview of the key Cisco DNA Center features—Assurance and Automation—and review an Industrial Automation Reference Architecture, concluding with a summary of the solution benefits for customers, system implementers, and partners in the industrial automation ecosystem.

●      Simplifying network management for IT and OT

Outages and downtime in production environments result in significant loss, whether caused by network failures, human error, or equipment failure. Bringing production back online quickly reduces the impact. The Cisco DNA Center Assurance suite of features and functions helps IT and OT quickly identify network outages or performance issues and resolve them rapidly. The key use cases this solution incorporates include:

●      Identifying and profiling end devices connected to the network and their connectivity status, including Industrial Automated Control System (IACS) devices such as sensors, actuators, and controllers, as identified by Cisco® Cyber Vision and communicated via Cisco Identity Services Engine (ISE)

●      Having visibility into applications operating on the industrial networks1

●      Proactively identifying issues in the network that impact production systems

From the start of this transition to standard networking for industrial networks, the operational teams have lacked the skills and expertise typically found in IT networking organizations. The Industrial Ethernet infrastructure is often installed and maintained by personnel with minimal networking background. The result is often network configurations that are consistent when first brought into operational mode but that drift with time, as network infrastructure is rarely if ever maintained or improved. This results in inconsistent configurations, uneven network device software images, and erratic security settings, all of which affect system performance.

With the increase in cybersecurity risks, the increased need to provide end-to-end connectivity while maintaining the highest levels of availability results in a critical need to consistently deploy more sophisticated configurations and maintain them throughout the network’s useful life. Industrial automation systems rely on the consistent, repeatable, and maintainable deployment and operation of sensors, controllers, and other equipment. Why should this not apply to the network infrastructure?

●      Checking for inconsistent configurations and deploying updates scalably and consistently

●      Deploying network software images and patches automatically and at scale

●      Providing OT with functions relevant to their responsibility

●      Maintaining an audit log for all network changes for accountability

1 This feature may require specific models or software versions in the portfolio.

●      Segment communications within the industrial zone and industrial DMZ

●      Contain malware and other attacks

Toward zero-trust security for industrial operations

The rapid digitization of operations has resulted in connected control systems, growth in the use of IoT devices, and the need to collect operational data to derive insights. Operations can no longer be secured only by firewalls in the industrial DMZ that were primarily designed to keep IT and operational networks separate. Innovative approaches are needed that leverage security models developed by IT, such as zero trust, which relies on deeper visibility into connected endpoints, their role in operations, and their interaction with other endpoints, enabling access policies to be developed and the network segmented.

Cisco DNA Center, with integration with Cyber Vision and ISE, can help secure your operations in the following ways:

●      Allowing the use of other Cisco security applications such as Cisco Umbrella®, Secure Network Analytics (Stealthwatch), and Cisco SecureX™ for further enterprise security integrations

For details on how to secure your manufacturing operations, please refer to the Securing Industrial Networks Solution Brief.

●      Visibility into IACS devices and communications

●      Plant and Cell-area zone segmentation for protection of critical operations

●      Availability of IACS devices and data for IoT applications

The Industrial Automation Reference Architecture describes the core network and security features and functions overlaid on an industry model for IACS. The integration of Cisco DNA Center into the industrial automation solution is depicted below. This is a key first step toward a fully software-defined network represented by Cisco’s Software-Defined Access model. 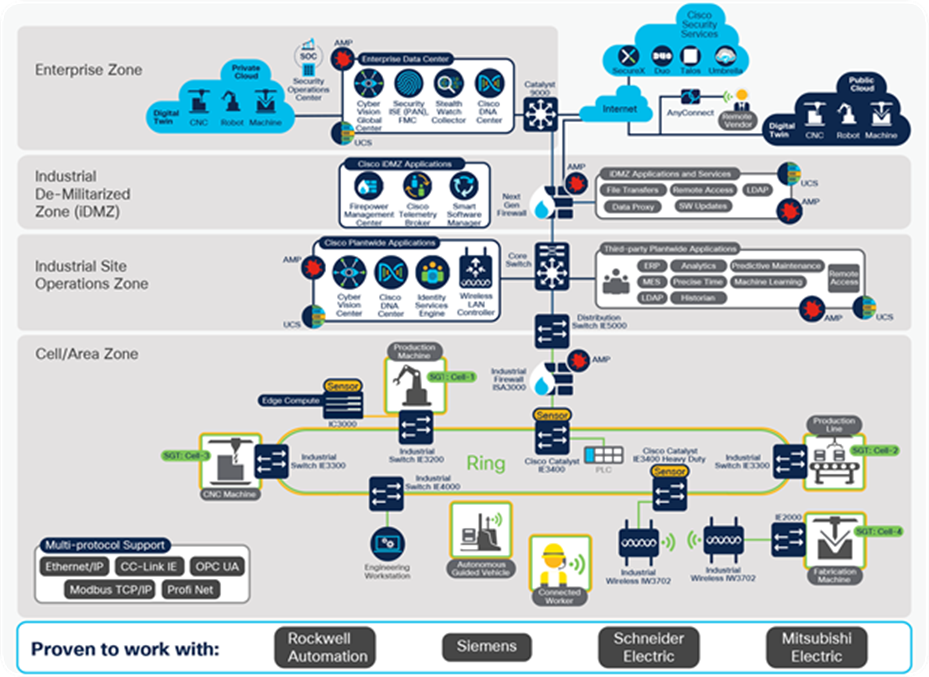 Providing automation and assurance to the industrial networks that form the basis of industry IoT initiatives greatly simplifies these initiatives, thereby accelerating the significant business benefits of digitization. On their own, these capabilities alleviate key problems associated with managing and operating these networks: a lack of visibility into network and end device connectivity status and a need for a consistent, scaled means to deploy and maintain these networks, reducing effort and making network management capabilities more widely available. Our solution helps customers and partners achieve these benefits by integrating Cisco DNA Center into our Industrial Automation CVDs.

For more on the industrial automation solution, please visit the Industry CVD page.