Best practices for I/O connectivity in today's data centers configure each server with redundant connections to each of two networks: two or more Ethernet network interfaces connect to IP networks, and two or more Fibre Channel Interfaces connect to storage networks. This approach has created a proliferation of cabling that imposes significant costs (Figure 1). Each network requires a dedicated set of switches, interfaces, transceivers, cabling, and the ongoing expense of managing, servicing, powering, and cooling the equipment needed to support them. There are hidden costs as well. To have sufficient expansion slot capacity to support all these interfaces, IT departments often must upgrade to larger, more expensive servers solely for their I/O capacity, expending capital and consuming valuable data center rack space.

Figure 1. Today's Data Center Best Practices Equip Each Server with a Redundant Pair of Ethernet and Fibre Channel Adapters, Resulting in a Proliferation of Access-Layer Cabling and Switching 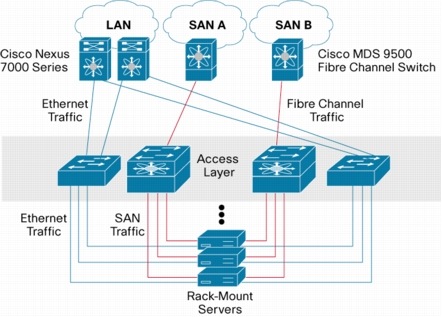 Cisco Nexus™ 5000 Series Switches change this situation by delivering a unified network fabric that supports Ethernet, Fibre Channel, and even interprocess communication (IPC) networks over a single 10 Gigabit Ethernet/Fibre Channel over Ethernet (FCoE) link (Figure 2). Servers can be configured with a single pair of converged network adapters (CNAs), sometimes called multifunction adapters, that interface with both the LAN and storage stacks in the operating system. This new type of adapter does not require any change to LAN or SAN behavioral models. FCoE is compatible with Fibre Channel management models, configuration methods, and tools, making the transition to FCoE a quick and easy proposition. 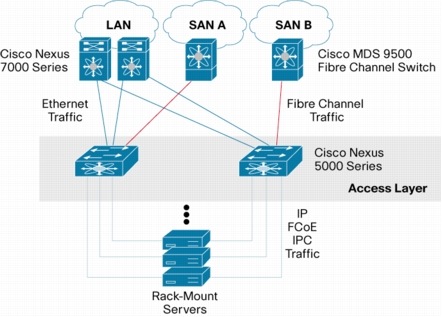 The benefits of this rack-level I/O consolidation include the following:

• Multiple NICs and HBAs can be consolidated into one CNA and use up to the 10-Gbps bandwidth limit per port. Reducing the number of adapters simplifies server configuration and conserves expansion slots. Total cost of ownership (TCO) savings can be significant; for more information, please see Cisco Nexus 5000 Series Switches: Decrease Data Center Costs with Consolidated I/O.

This document explores the benefits of I/O consolidation in two deployment scenarios: high-density racks of two-rack-unit (2RU) servers, and racks of blade servers as they begin to support 10 Gigabit Ethernet.

The Cisco Nexus 5020 Switch has the port density and the I/O consolidation capability to dramatically reduce the number of cables and switches needed to support racks filled with 2RU servers. Figure 3 illustrates one possible scenario: a pod composed of two racks, each with 20 2RU servers and a single Cisco Nexus 5020. An IT department can consolidate I/O in this way using a number of different methods:

• For servers already configured with compatible 10 Gigabit Ethernet NICs, a driver can be used to implement both IP and Fibre Channel stacks and pass both traffic streams over the same link to the access-layer switch.

• In organizations rolling out new servers, the cost of deploying multiple 10 Gigabit Ethernet NICs and multiple Fibre Channel HBAs can be avoided by configuring servers from the start with CNAs to support redundant, consolidated I/O.

Regardless of the route by which I/O consolidation is achieved, the benefits are numerous:

• All in-rack I/O connections can be supported by low-cost, low-latency, and low-power SFP+ direct-attach 10 Gigabit copper cabling between servers and the top-of-rack switch. The need for more expensive fiber connections is limited to LAN connections to the aggregation layer, or Fibre Channel connections to the SAN core.

• The number of in-rack cables is reduced by two or more per server, which also reduces the number of adapters and transceivers along with their power draw and the load they place on the data center cooling infrastructure.

A growing number of options exist for 10 Gigabit Ethernet connectivity to blade servers. Today, some blade systems support internal switches that provide 10 Gigabit Ethernet connectivity to each blade and a small number of uplinks from the chassis. This situation is likely to change rapidly, with 10 Gigabit Ethernet appearing on blade server motherboards, and consolidated network adapters appearing in mezzanine-board form factors. The alternative approach is for network pass-through connections to deliver each blade's network interfaces to the chassis and then extended directly to the access-layer switch.
Network pass-through configurations are preferred over built-in switches because they allow all traffic to be managed by a uniform data center network infrastructure, eliminating the need for another, inconsistent layer of management in the data center network. Blade switches force fixed oversubscription ratios at the chassis level, and they also are not likely to provide the features needed to extend the unified network fabric to each blade; pass-through connections eliminate these concerns.

Figure 4 shows a hypothetical blade server configuration using pass-through networking. Two blade systems are installed in a rack, each with 16 blades and two 10 Gigabit Ethernet links per blade extended to the chassis. I/O is consolidated on each blade in either of two ways: 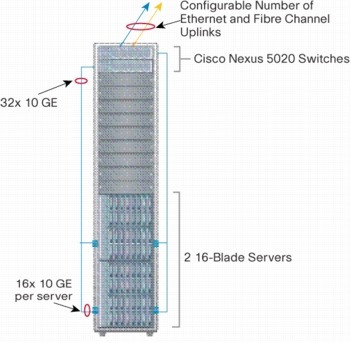