SCSI is a block-transfer protocol that enables data transfer between various independent peripheral devices and computers. SCSI connects disks in a storage array and the tape drives of a tape library to the servers. Figure 1 shows a comparison of Fibre Channel, Fibre Channel over Ethernet (FCoE), and iSCSI, the most widely deployed block-storage protocols. 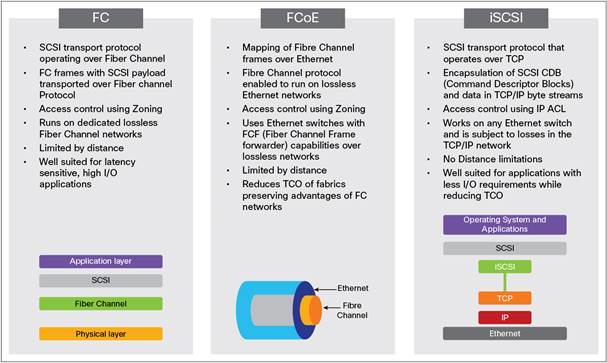 The TCP payload of an iSCSI packet contains iSCSI protocol data units (PDUs), all of which begin with one or more header segments followed by zero or more data segments.

An iSCSI network consists of multiple devices such as iSCSI initiators and iSCSI targets. Each device has various components associated with it. Some of the iSCSI components that make up an iSCSI storage network are listed here:

●   Network entity: The network entity represents a device or gateway that is accessible from the IP network (for example, a host or storage array).

The highest level of an iSCSI communications path is a session that is formed between an iSCSI initiator and an iSCSI target. Two types of sessions are defined in iSCSI:

●   Priority Flow Control (PFC): PFC enables eight virtual queues on a single wire and helps send Pause frames to a single type of traffic instead of all traffic on the wire. This feature helps prevent head-of-the-line blocking while maintaining lossless capabilities. In consolidated networks, in which a mix of traffic is sent on the same wire, PFC helps prioritize the traffic and assign it to either the drop or no-drop class. PFC is useful for iSCSI networks when they are designed for lossless, oversubscribed networks.

●   Enhanced Transmission Selection (ETS): ETS provides the capability to allocate bandwidth to each traffic class on the same wire. ETS helps prioritize and optimize the throughput for IP storage traffic, which shares a medium with other traffic on the same link. The guaranteed bandwidth also aids in performance calculations to tune applications during peak traffic.

●   Data Center Bridging Exchange (DCBX) Protocol: DCBX is used to exchange all the DCB features across the devices and maintain consistency. DCBX helps ensure consistent quality-of-service (QoS) parameters across the network and servers. The features are advertised to the servers in type-length-value (TLV) format using the Link Layer Discovery Protocol (LLDP).

The choice of a traditional or a lossless iSCSI network deployment depends on the application requirements and the oversubscription ratio of the storage network.

Figure 4 lists some of the differences between traditional and lossless iSCSI networks. 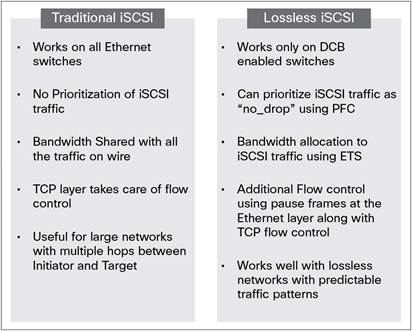 As business needs change and additional demands are placed on data centers, today’s IT operators and administrators are seeking ways to build efficient storage networks and get extra value from their investments. IP storage networks require careful design because traffic shares the network with other applications. Architects must take into account not only how to handle the existing data that traverses the network, but also how to handle data growth over time.

●   Bandwidth allocation and distribution of resources to the iSCSI traffic

●   Consistent and predictable performance across the network

●   Effective use of switch ports while performing load balancing

Cisco Nexus switches provide these capabilities and the features needed for an efficient IP storage network.

Table 1 shows the features provided by Cisco Nexus and Cisco MDS 9000 Family switches and their benefits in iSCSI storage networks.

Cisco Nexus switches are manageable, secure, highly available, and resilient Ethernet switches with a comprehensive feature set. These switches give data center designers and administrators the flexibility to deploy any storage device anywhere in the network. In particular, IP storage devices benefit from the increased cross-sectional bandwidth, segregation of storage traffic, and high availability provided by these switches. These features enable data center designers to deploy IP storage arrays for mission-critical applications. In addition, by enabling the consolidation of I/O traffic, these platforms allow administrators to reduce their overall capital expenditures (CapEx) and operating expenses (OpEx) while taking advantage of both mature and future Ethernet features. This flexibility allows Cisco Nexus switches to dynamically meet the changing business and performance requirements in the data center.