The thermal design of the Cisco UCS® C480 ML Rack Server involves ultra-dense packing of the several extremely high-power components with an objective of meeting all of the components’ temperatures specifications in the most-energy efficient manner. The chassis is designed to support highest-power and highest-performance Intel® Skylake and Cascade Lake CPUs up to 205W each, and highest-power NVIDIA Tesla SXM2 GPUs up to 300W each. The design objective is to meet the ASHRAE A2 Class ambient temperature of 35°C without any of the components throttling from over-temperature conditions. This paper explains the engineering effort that went into the design and testing of the C480 ML server. Mechanical design, powers, airflows, and component temperatures are detailed.

The Cisco UCS C480 ML Rack Server is a 4U chassis designed to fit industry standard 19 in racks. The chassis is purpose built for deep learning. Some of the key components of the C480 ML are:

The C480 ML is designed to support the highest-performance-available key components:

The thermal design goal is to engineer the system to meet ASHRAE Thermal Guidelines to the A2 Environmental Class. Then the goal is to design the chassis to an operating ambient temperature of 35°C and an altitude of 950 m without any of the key components throttling under maximum possible load or stress conditions. Surely extended temperatures above 35°C and extended altitudes over 950 m will be supported – but, if necessary, the key components may throttle to support these extended environmental conditions.

Figures 1(a) to 1(c) provide an overview of the mechanical layout of the chassis. HDDs and CPU + memory modules are in the front of the chassis, followed by 4x system cooling fans; the 8x GPUs are in the rear of the chassis behind the fans. The 4x Power Supply Units (PSUs) and the I/O module are inserted from the chassis rear on the bottom side, as shown in the Figure 1(c). The GPUs are arranged in a 4x2 pattern – four upstream and four downstream in the airflow path. Figures 1(d) and 1(e) show the layout of the GPUs with and without the GPU heatsinks.

Figure 1(a).    Overview of the Cisco UCS C480 ML chassis; an optional front bezel is shown. 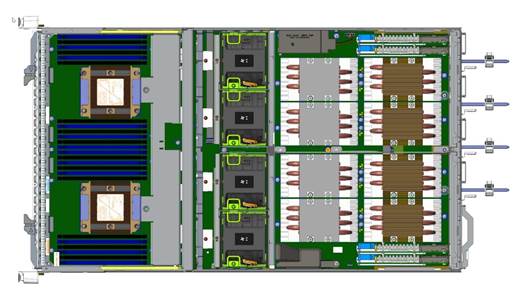 Figure 2(a).    Isometric view of the Cisco UCS C480 ML chassis, with the top cover removed, and front-to-back airflow 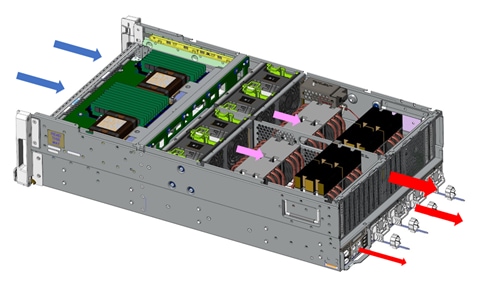 Figure 2(b).    View of the CPUs and memory module, with the cover removed, and front-to-back airflow

Figures 2(a) and 2(b) show views of the CPU and memory module. There are two CPU sockets and a total of 24 memory sockets. Figure 2(b) shows airflow that cools the CPUs and components inside the compute module. All heatsinks are custom designed by Cisco to meet the chassis cooling goals in the most energy efficient manner possible.

Figure 2(c).    View of the CPUs and memory module, with the cover on Figure 2(d).    PSU cooling airflow paths in the Cisco UCS C480 ML chassis; a portion of the exhaust air from the fans is bent downwards, by design, into the 4x PSUs.

Figure 2(e).    I/O Module cooling airflow paths in the Cisco UCS C480 ML chassis; a portion of the exhaust air from the fans is bent downwards, by design, into the I/O module.

Figure 3(a).    Isometric view of the front GPU heatsink; the heatsink is used to cool the GPU core and memory. Figure 3(b).    Isometric view of the rear GPU heatsink; the heatsink is used to cool the GPU core and memory. 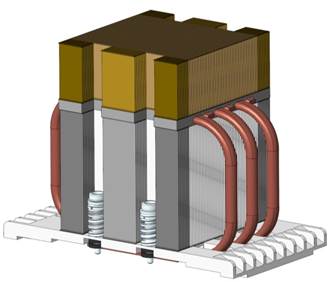 Extensive thermal testing for temperature margins and thermal controls was done for the C480 ML chassis by Cisco. Test data demonstrates that cooling objectives for the chassis are met with positive thermal margins. Figure 4(a) shows measured data for the GPU temperatures. Per NVIDIA thermal specs, the GPUs’ temperature throttling is initiated at 80°C; all of the six 300W GPU temperatures are below the 80°C limit even at Tambient = 36°C. The data in Figure 4(a) is generated using an NVIDIA provided test suite, NVQual. The NVQual test comprises two portions, each running for 30 minutes. The first portion is called TDP, to maximize the power consumption on the GPU core; the second portion is call TDP, max, to maximize the power consumption of the FPU memory. Figure 4(b) shows data from a set of measurements where three loops of NVQual are run. GPU power and temperature data are included in this chart. Clearly, all GPU temperatures are below the design goal of 80°C, and the measured GPU powers are about 300W and 250W for the TDP and TDP, max portions. Figure 4(c) shows the measured chassis data for a test where network traffic stress is started first with the host off (the main fans are off), followed by with host on, then Intel’s PTUgen (Power Thermal Utility generator for CPU and memory) stressor is added, and finally NVIDIA NVQual is added. The system is placed in an environmental chamber, and the chamber temperature is varied from 15 to 35 to 15°C. This test represents extreme stress conditions, and Cisco does not foresee any real customer system or application coming close to these extreme test conditions. As is seen from the measured data, the GPU temperatures are within NVIDIA limits. The maximum measured system inlet AC power usage reached about 4000W during the test.

It is worth mentioning that Cisco uses best-in-class fan speed control algorithms to maximize energy efficiencies. Further, our algorithms react with very low latencies to prevent any throttling of components, and hence there is no performance loss that might result from oscillating loads. 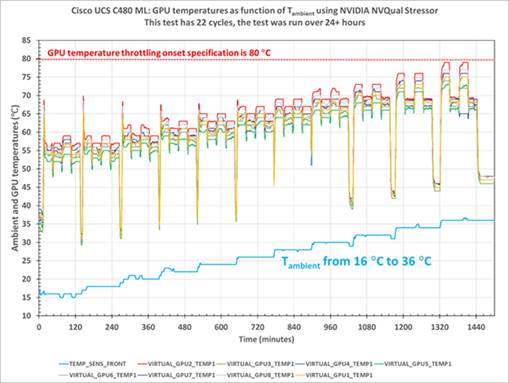 Figure 4(b).    Chart shows measured GPU temperatures and power for three loops of NVQual. Each NVQual loop consists of a TDP stress (to maximize core power) and a TDP, max portion (to maximize GPU memory power); each portion lasts about 30 minutes. 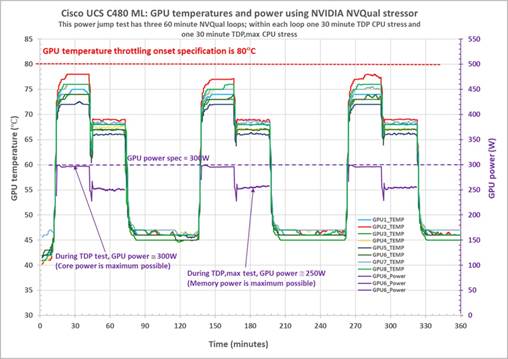 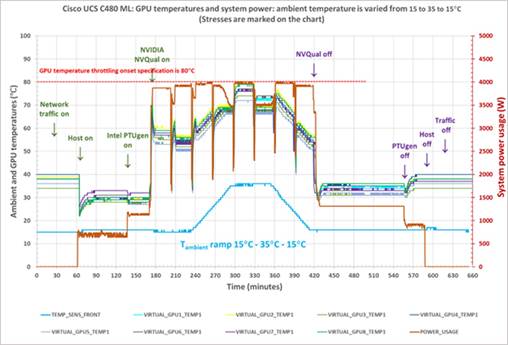