The Cisco® Network Analysis Module (NAM) provides visibility into how the network is performing and how users experience the applications and services delivered over the network.

Cisco NAM is available in an integrated services module and virtual blade and appliance form factors to address diverse monitoring needs throughout the Cisco network: the data center, the branch, the campus core, aggregation, and even closet locations. All form factors support the latest software version 4.2.

Alerting and Troubleshooting with NAM

With Cisco NAM deployed in different places in the network collecting and analyzing the network traffic, it becomes a very valuable tool for alerting and troubleshooting issues. NAM can be configured with thresholds to trigger alerts and capture packets when the thresholds are exceeded.

Intelligent application performance (IAP) monitoring is a key feature that NAM provides: an ability to measure the response time of transactions between the client and server.

The IAP toolkit is powerful, providing 45 metrics into application response times and network latency. Becoming familiar with the metrics that are important to your network will provide significant benefits in helping manage your network performance. The metrics can be found in Table 4-40 in the NAM user guide at http://www.cisco.com/en/US/docs/net_mgmt/network_analysis_module_software/4.1/user/guide/monitor.html#wp1046620.

Providing a high-quality network experience to users located in branch locations that are geographically dispersed from data centers is one of the tougher challenges facing IT today. The trend toward data center consolidation has provided significant savings in resources and made data centers more robust and reliable. At the same time, this trend has pushed most enterprise users further away from the data center (typically, large, consolidated data centers are located in a few locations across the country and serve tens of thousands of users spread across offices in the country and the rest of the world). As a result, transaction-intensive (chatty) applications that were designed to communicate across a LAN are now forced to work across the WAN, resulting in poor performance. In short, while data center consolidation offers a host of benefits, it also raises issues around the experience of individual users. It is therefore critical for IT to measure user experience as perceived by users in each office and proactively manage network performance so that employee productivity remains unaffected irrespective of location.

Scenario: A NAM is deployed at the data center (NAM-2 blade or 2200 appliance) closest to the servers. The administrator needs to trend over time the HTTP response time from the servers’ perspective. Based on those trends, administrators can configure alarm alerts and thresholds and capture and troubleshoot a response time issue when an alert is received. The Server Average Response Time variable will be used for this scenario. However, thresholds based on other variables can be configured for your environment.

Once the network is in a steady state (for example, network metrics such as response time, bandwidth utilization, and so on are all within acceptable limits), NAM can monitor for deviation from the norm. If such a deviation occurs, the system raises an alarm, packet capture is executed, and subsequent actions can be taken, for example, viewing the application response time table to identify the application and hosts having issues.

Set up thresholds on the NAM, which when exceeded will generate an alarm. Set up relevant actions to be performed under threshold conditions (for example, send email, traps, or logs). Packet capture can also be initiated by the alarm.

Refer to the NAM 4.2 user guide for detailed instructions for configuring thresholds and alarms at http://www.cisco.com/en/US/docs/net_mgmt/network_analysis_module_software/4.2/user/guide/nam42_ug.html.

If Server Y is identified, monitor response times between Y and each host that sends traffic to Y.

If response times are high uniformly for all hosts, it could be a server issue. If response times are high for one particular subnet or host, use other NAM monitoring features to identify the root cause. This can be done by looking at managed device interface/port utilization - see if there are any spikes; top hosts - which host is utilizing the bandwidth; and top conversations - which server client pairs are causing issues. See Figure 1. Host, conversation, and interface monitoring provides bandwidth consumption for those items. The bandwidth consumption can help identify bottlenecks before the users complain about network performance and availability. Using the same scenario stated above and following similar steps, the administrator can view the host, conversation, and interface statistics tables to identify high-bandwidth consumers such as servers in the data center and which clients are accessing those servers. Once those are known, reports can be configured to trend the bandwidth consumption for a period of time. Based on the trends for the top talkers, thresholds can be configured to trigger alerts and packet captures. Packet capture is not available for triggers from interface bandwidth threshold violations.

Once the network is in a steady state (for example, network metrics such as top talkers, bandwidth utilization, and so on are all within acceptable limits), NAM can monitor for deviation from the norm. If such a deviation occurs, the system raises an alarm, a trap or syslog is sent, and packet capture is started.

Set up thresholds on the NAM, which when exceeded will generate an alarm. Set up relevant actions such as send email, traps, or logs and start packet capture to decode during troubleshooting to identify the cause of the alarm.

Figures 2, 3, and 4 show the monitoring screens for hosts, conversations, and interface statistics, respectively. 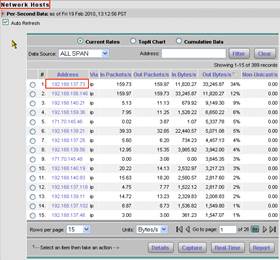 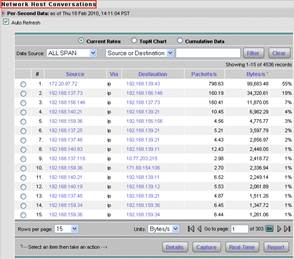 Figure 3 displays the host-conversation pairs. Clicking the IP address will display the host details with to and from protocol information.

Once the network is in a steady state (for example, interface utilization is all within acceptable limits), NAM can monitor for deviation from the norm. If such a deviation occurs, the system raises an alarm, and subsequent action is taken.

Set up thresholds on the NAM, which when exceeded will generate an alarm. Set up relevant actions such as send email, traps, or logs and start packet capture to decode during troubleshooting to identify the cause of the alarm. 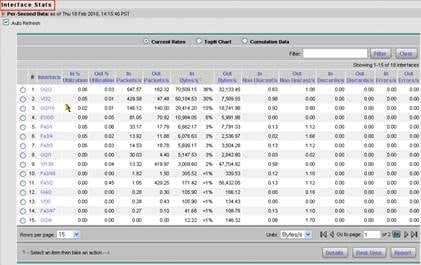 DiffServ provides insight into how the traffic is being classified by quality of service (QoS) and detects incorrectly marked or unauthorized traffic. NAM identifies the application or protocol based on the type of service (ToS) bits setting. The administrator must configure DiffServ profiles based on templates provided or create one. The voice template can be used to monitor whether voice traffic is marked properly. Figure 5 displays the DiffServ application statistics for DSCP value 0. Looking at this you’ll notice Real-Time Transport Protocol (RTP) and Skinny Client Control Protocol (SCCP) in the list, which indicates that they are not being correctly marked throughout their path. 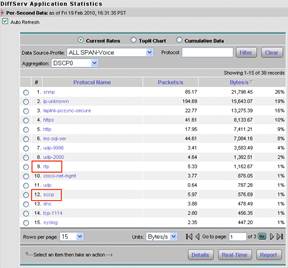 Clicking rtp or sccp will display the clients using those protocols and help in troubleshooting why RTP or SCCP traffic from these clients is not marked correctly (Figure 6). Review the QoS policy implemented on the routers and or switches between the clients.

Consider a situation in which the network administrator learns about problems with voice-over-IP (VoIP) quality by monitoring the NAM GUI. What steps could the administrator follow to isolate the problem’s root cause? 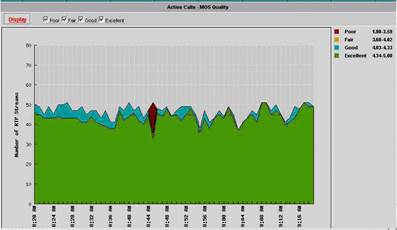 As illustrated in Figure 7, NAM classifies the voice calls by quality into poor, fair, good, and excellent categories. This rating is based on Mean Opinion Scores (MOSs) and can be configured by the user to suit the network’s sensitivity levels. NAM uses preset default values for the MOS ranges. The chart indicates that there were a few calls with poor quality a few minutes ago.

In response to this problem, the next step in troubleshooting is to navigate to obtain more detail about poor calls. Figure 8 shows the individual RTP streams and the MOS values associated with them. As indicated in the highlighted portion of the table in Figure 8, the MOS of the first several calls is very low (1.76) as per the ranges defined in the foregoing chart.

There are other interesting clues that can be gleaned from Figure 8. Note that the Packet Loss column indicates that VoIP streams are experiencing packet loss.

The next step is to get clues as to where packets are being dropped. The source address of the RTP stream should be examined. All calls have the source IP address 10.14.1.2 but with different port numbers. This is typical of a conferencing system that uses different port numbers for different streams. By looking up the network topology diagram, we learn that 10.14.1.2 is located in Building 3 of the main campus of the company. The topology also indicates that there is a NAM at the edge router for Building 3. We log in to that NAM looking for clues on where packets might be getting dropped.

By navigating to the Interface statistics screen that provides details about packet-related statistics (Figure 9), we find that Gi1/22, the interface that connects to the core of the campus network, is experiencing serious packet loss.

As this interface serves all traffic going from and to Building 3 and the rest of the campus, including voice traffic, this is most likely the root cause for packet drops on the RTP stream. The problem in this case was found to be a hardware defect on the line card that affected the interface. Replacing the card fixed the issue.

This troubleshooting workflow highlights some of the VoIP quality monitoring capabilities and also shows how VoIP features can be used in combination with other traffic monitoring features on the NAM. In this particular case, we used interface statistics monitoring in the NAM in Building 3 to isolate the root cause of the problem.

This document provides use cases for configuring alarm alerts and thresholds and for troubleshooting the alarm once received. The alarm is generated when the baseline threshold configured is exceeded. The alert can be configured for notification by email, log, trap, or all three. The scenarios covered application performance, hosts, conversations, interface utilization, DiffServ, and voice.

NAM is able to collect and analyze information from various data sources, such as, SPAN (including RSPAN and ERSPAN), NetFlow, and the embedded instrumentation on WAN Acceleration Engine (WAE) to provide insights into the different stages in the network. The NAM’s real-time monitoring, historical reporting, and application performance analytics can be used to gain visibility into optimization opportunities, baselining application performance, understanding the impact of WAN optimization, and ongoing troubleshooting across the network.